Souza Is Focused On Making The Most Of This Opportunity 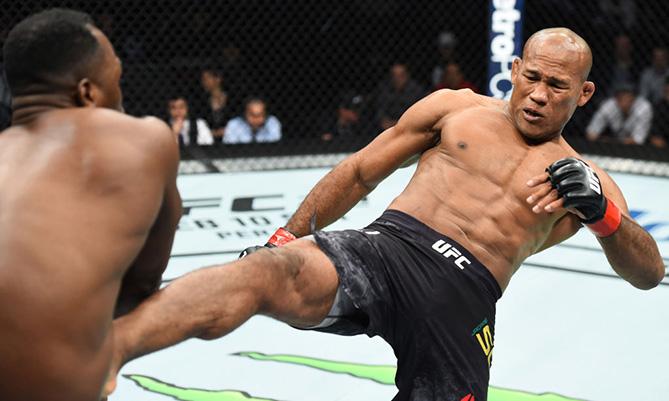 Ronaldo Souza of Brazil kicks Derek Brunson in their middleweight bout during a UFC Fight Night event at Spectrum Center on January 27, 2018 in Charlotte, North Carolina. (Photo by Josh Hedges/Zuffa LLC via Getty Images)" align="center"" />Two weeks before he was set to return to action at UFC 230, a change in opponents moved perennial contender Ronaldo “Jacare” Souza up the fight card and one step closer to challenging for middleweight gold.
Initially scheduled to face David Branch, Souza was tabbed to replace Luke Rockhold in the co-main event on Saturday night at Madison Square Garden in a fight against Chris Weidman when Rockhold was forced out of the rematch between the former champions with an undisclosed injury.
A former champion under the Strikeforce banner, Souza has been entrenched in the Top 10 since matriculating to the UFC and a fixture in the Top 5 for the last several years, but the chance to fight for the middleweight title has always escaped him.
The timing wasn’t right or he landed on the wrong side of a close decision or a young talent momentarily halted his ascent. Whatever the reason or causes, Souza simply hasn’t been able to clear that final hurdle between being a permanent resident in the upper echelon of the 185-pound weight class and challenging for UFC gold.

In moving one spot further up the fight card this weekend in New York City, Souza is hopeful that a victory will bring him one step closer to reaching his goal.
“I’ve been fighting against high-level guys all the time and fighting high-level guys in MMA is what will help me accomplish my objective, which is to be champion,” said the Brazilian standout, speaking through a translator. “Every fight is about showing up and doing my best, which will create an opportunity for that title shot.”
While getting up for a fight against a former champion is never difficult, Souza is taking a different mental approach to his short-notice shift to facing Weidman, viewing the bout as a rematch despite never having faced the Long Island native in the past.
Part of the reason for the unconventional way of looking at the pairing is because the 38-year-old Brazilian has never lost a bout when he’s faced an opponent for a second time inside the cage.
Order UFC 230 here!
After losing to Gegard Mousasi during their days fighting in Japan, Souza earned a measure of revenge against the ultra-talented veteran when they clashed inside the UFC cage four years ago, and he’s emerged victorious in each of his two return appearances opposite divisional stalwarts Chris Camozzi and Derek Brunson.
The closest he’s come to losing a second meeting with a repeat opponent was when his rematch with Jason “Mayhem” Miller was stopped less than three minutes into the fight and declared a No Contest after Souza suffered a nasty cut on the top of his head as a result of an illegal kick from Miller. 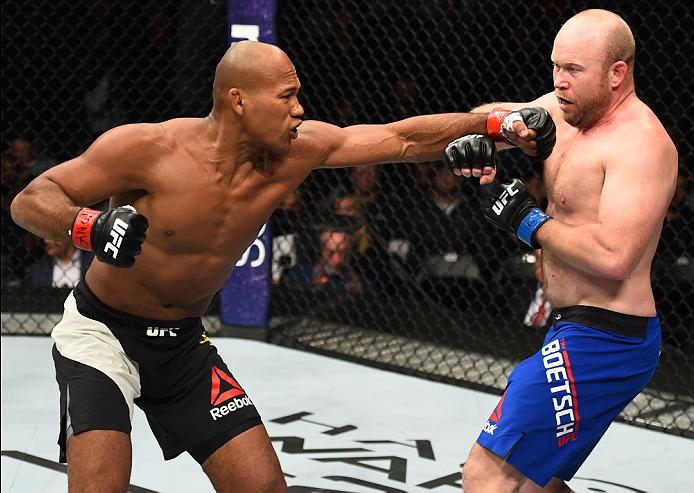 Tim Boetsch in their middleweight bout during the UFC 208 event inside Barclays Center on February 11, 2017 in Brooklyn, New York. (Photo by Jeff Bottari/Zuffa LLC via Getty Images)" align="center"" />The other piece is that Weidman is 5-0 in the UFC and 6-0 overall in his career against Brazilian opponents, including earning victories over Souza’s long-time friends Anderson Silva and Lyoto Machida.
“I have a lot of respect for him — for his lifestyle, for him (as a person), for his style of fighting,” he said of Weidman. “I’m going there feeling like I lost to him (already) because in my mind, I’ve never lost a rematch.
“In my mind, because he fought a bunch of friends of mine, I’m going into this fight as if I’m fighting a rematch, so that will help me to go there and get the win.”
Though he admits it’s his means of relaying to fans that they can expect his best on Saturday night, the fact is that no one has ever doubted Souza’s ability to turn up and deliver an outstanding performance every time he’s called to the cage.
While he has yet to break through and earn his shot at UFC gold, there is no denying that the multi-time Brazilian jiu-jitsu world champion remains one of the elite middleweights in the sport today and has held down that position for nearly a decade.

Narração do querido amigo. Narration by @rhoodeslima @canalcombate
A post shared by Ronaldo Jacaré (@ronaldojacare) on Oct 12, 2018 at 10:22am PDT

Souza is 15-4 since that No Contest result against Miller, including victories over Tim Kennedy, Robbie Lawler, Brunson (twice), Mousasi and Vitor Belfort. Three of those four setbacks came on the scorecards, including split decision verdicts against Yoel Romero and Kelvin Gastelum and a unanimous decision defeat against Rockhold that was closer than the words “unanimous decision” often convey.
The only other person to beat him during that time (Robert Whittaker) currently sits atop the middleweight throne, which only further strengthens Souza’s drive to deliver a strong performance on Saturday night and move another step forward in his pursuit of a title shot.
Although earning an opportunity to fight for UFC gold is the overarching goal, the veteran’s focus is solely on making the most of his opportunity this weekend.
“I just hope everything goes wrong on his end and I go there, have a great fight, smash him and get the win,” he said with a laugh when asked how he sees Saturday’s contest with Weidman playing out.
“I’m very calm. I had a great camp this time and I’m pretty much going to go there, do my best fight, do my best game and make sure that I win in convincing fashion.”