The Sound and Fury of Francisco Rivera 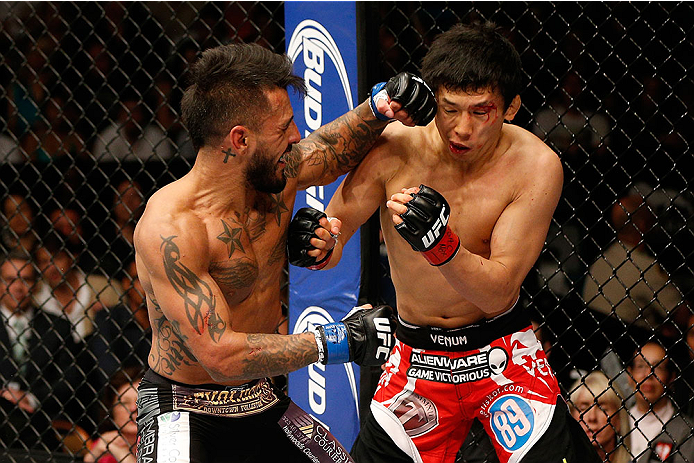 There has never been a shortage of aggression where Francisco Rivera is concerned.

The intangible fire is obvious in the scrappy bantamweight’s fighting style inside the Octagon, just as it was years earlier on the gridiron in Southern California. Whether in football or fighting, Rivera’s ability to harness and control his aggression created performances that yielded successful results, and when something works why change it?

Rivera certainly has no intention of dulling one of his greatest attributes, and his commitment to pushing the action inside the Octagon has made him a favorite with the UFC’s passionate fan base. Anytime “Cisco” is on the lineup, the fighting faithful know to expect to see some ruckus, and that’s exactly what Rivera has delivered time after time.

“Aggression is something that comes to me naturally,” Rivera said. “It is there every time I fight and I’m looking for the finish every chance I get. I train in every discipline, but my fighting style is definitely geared toward me getting the knockout or getting knocked out myself, if that’s the case. I’m coming in there to fight and that is what the fans want to see.

“That is the way I’ve always been. Back when I was playing football I was always a very aggressive player. It didn’t matter how big, fast or strong they were out on the field, I was going right at them and I have the same mentality when it comes to fighting. I was always one of the smaller guys on my football team and I had to prove that size didn’t matter. Once I had those pads and that helmet on, I’d go head-to-head with 200-pound linebackers. I wasn’t afraid of anyone and that’s how I got my name out there and was selected to play in the Orange County All-Star game. I was really well known for my aggressive style, and that carried over to my approach in the fight game.”

While gaining the attention of passionate fight fans is half the battle for a competitor under the UFC banner, that aspect is only one portion of the story Rivera is building at the current time. After years of being recognized as a game and dangerous opponent when things go live, the 33-year-old has started to find his foothold in the hectic ranks of the bantamweight division.

His current wave of momentum was sparked when he squared off with former WEC featherweight champion and two-time UFC bantamweight title challenger Urijah Faber at UFC 181 last December.

Even though Rivera would come out on the losing end of a highly controversial affair, the savvy veteran was taking the fight to “The California Kid” all the way up to the moment an inadvertent eye poke took place, allowing Faber to sink in the fight-ending submission. And while Rivera and his team would call for an immediate rematch and appeal to have the loss overturned by the Nevada State Athletic Commission, Rivera felt a swell in appreciation from MMA fans across social media platforms, and to him that was a signal that there was a shift in motion.

Rivera knew he needed to keep the energy surrounding him rolling, and he did so in spectacular fashion as he starched Alex Caceres in the first round of his next showing at UFC Fight Night: Boetsch vs. Henderson in New Orleans this past June. Furthermore, his knockout victory over “Bruce Leeroy” was proof that elements that had long lingered within Rivera’s grasp were finally coming together to produce something that felt unstoppable.

“I definitely was interested in running back that Faber fight before, but I’ve moved on now. That situation is done and gone, and had there been something I could have done to make that fight happen I would have done it already. I wanted to fight him again right away, but when that didn’t happen I had to put all of my focus on Caceres. I wasn’t going to look past him, and I trained very hard for that fight. And it worked out perfect.

The Buena Park, California product always had power, just like he always had the will to go to whatever limits were necessary to win a fight. Yet, his overall evolution of a fighter had finally brought him to a place where all physical and mental cylinders were firing in perfect unison.

As Rivera’s fight skills have moved to the next level, his next goal is to make a run for the 135-pound crown. Due to a collection of potential contenders being plagued by injuries over the past year, the bantamweight division has become the UFC equivalent of the “Wild Wild West,” meaning tremendous ground can be made and career-making opportunities can arise just around every corner. Those are circumstances Rivera can embrace, and he knows his upcoming bout against John Lineker could affect the divisional title picture in a big way.

Despite being one of the major players in the flyweight fold for the past several years and being within striking distance of a shot at the 125-pound crown on multiple occasions, the heavy-handed Brazilian’s inability to consistently make the contracted weight limit put the UFC brass into a position where they forced Lineker to move up a weight class. He will make his first showing as a UFC bantamweight inside the Octagon this Saturday, as Rivera is set to welcome him to his new home at UFC 191 in Las Vegas.

And while Rivera is excited to play the role of spoiler, he’s also well aware that a victory over Lineker will help him jump up the 135-pound divisional ladder as well.

“Getting that belt is always a goal of mine and is always in the back of my head, but I don’t focus on that once the cage door closes,” Rivera said. “Once it’s time to fight, every bit of my attention goes into winning that fight because all of the things I want in my career and all of my goals are hinged on winning the fight that is right in front of me. When I win, that’s when the good things happen. I get my win bonus, my name gets out there more with the UFC and these things are only multiplied when I get the victory in impressive fashion, so that’s what I try to do.

“Lineker having to move up to bantamweight is his own fault,” he added. “A lot of people thought he could really do something at 125, and he certainly had his chances and could have fought for the belt, but he messed that up by missing weight so many times. Who am I to say what happened or why he missed weight those times, but if he couldn’t make the weight limit then he shouldn’t have been fighting there in the first place. And now he’s coming up and he’s not going to be fighting guys who are 5-2 anymore. Everyone is going to be bigger and stronger here, starting with me on Saturday.”