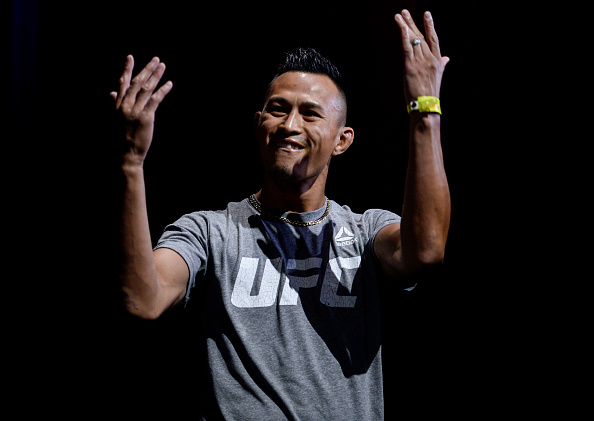 Andre Soukhamthath walks onto the stage during a UFC 222 weigh-in on March 2, 2018 in Las Vegas, Nevada. (Photo by Brandon Magnus/Zuffa LLC/Zuffa LLC via Getty Images)" align="center" />
Andre Soukhamthath wasn’t too concerned with being the “bad guy” and facing Canada’s Gavin Tucker in Moncton a week from Saturday.

“I really didn’t look at it like that,” said Soukhamthath. “Gavin Tucker is a tough prospect anyway, so I was just focused on beating him, whether I was the bad guy or the good guy, hated or loved, I didn’t really care. I was zoomed in on my focus for that fight.”

“The Asian Sensation” is still focused on his first business trip to Canada, only next week he won’t be facing a local hero, as he will now meet Octagon newcomer Jonathan Martinez, who stepped in for the injured Tucker on short notice. And no, it doesn’t matter who is across from him or where the Octagon is.

“I just say yes,” Soukhamthath said. “I’m not gonna back out just because there’s a change of an opponent and I’m not gonna get all stressed out worrying myself. I’m fully confident in my camp and my training and myself for this fight. I got ready for Tucker, Tucker brought out the best in me, and now it’s gonna be this kid. He’s gonna get it, no matter what. Anybody can get it.”

Soukhamthath laughs, at ease before he gets a chance to make a statement north of the border that he’s not the same guy who has stumbled out to a 1-3 record in his first four UFC bouts. And even that guy’s record is deceiving, so when he says, “I could easily be 4-0 if I made better decisions in the cage,” that’s not a fighter refusing to accept reality. It’s the truth.

The New Englander’s first two trips to the Octagon resulted in close split decision losses to Alberto Morales and Alejandro Perez that could have gone his way. His third bout was an emphatic knockout win over Luke Sanders, and in March, he faced off with hot prospect Sean O’Malley. And that was a bout that got plenty of attention. Not for what O’Malley did in winning a unanimous decision, but for what Soukhamthath didn’t do late in the fight. 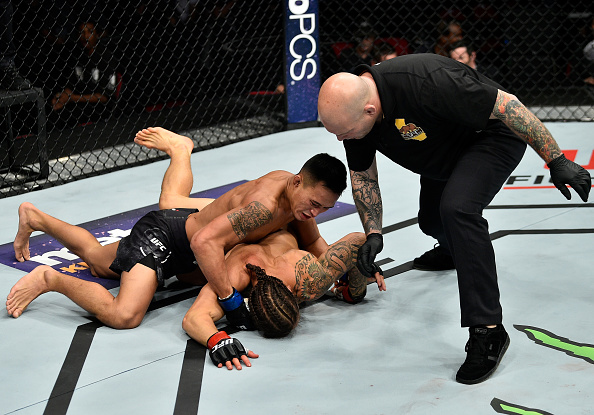 UFC Fight Night event inside Save Mart Center on December 9, 2017 in Fresno, California. (Photo by Jeff Bottari/Zuffa LLC/Zuffa LLC via Getty Images)" align="left" />“I don’t make excuses; I’m the first to admit that I messed up,” Soukhamthath said. “I could have easily won that fight if I just stood up.”

Down the stretch in the third round, O’Malley injured his foot and could barely stand. Soukhamthath took the fight to the mat, with most assuming that if he let his opponent up, the bout would have been stopped because O’Malley wouldn’t have been able to defend himself on the feet. That didn’t happen, and while Soukhamthath got a Fight of the Night bonus, he also took his share of heat from armchair quarterbacks after the fight.

“A lot of people made fun of me because of that, but I’m past all that now and I’ve grown a lot from that fight and I learned a lot from that experience,” he said. “I probably needed that. It humbled me a lot and now I’m back to my roots, back to the hungry Andre that I was before I got signed to the UFC.”

To help with getting his mojo back, Soukhamthath split his camp for this fight between his training home in Florida and his hometown of Rhode Island. It was the boost he needed.

“I feel like I wanted to go back to my roots,” he said. “Of course, the training is great in Florida, there’s no doubt about that, but I felt like I needed that fire back and to get that fire back I had to come home with my old coaches and get more specified training for this fight and build a strong team around Andre Soukhamthath.”

The recipient of all this will be Jonathan Martinez, and Soukhamthath can’t wait to reintroduce himself on October 27.

“Both mentally and physically, I’m feeling like a different person, a different animal, a different athlete, and that’s really important,” he said. “I learned my lesson my first year in the UFC, and you’re gonna see some special things from me from now on. I’m gonna put on some exciting fights, some exciting knockouts and I’m ready to build my legacy in the UFC now.”