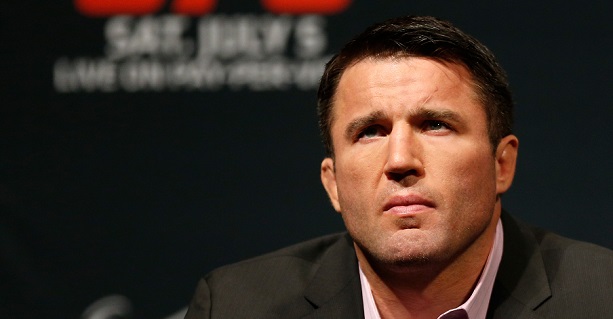 On Tuesday afternoon, ESPN first reported that Chael Sonnen had failed a random drug test administered by the Nevada State Athletic Commission while he was in Las Vegas last month.

The two drugs Sonnen tested positive for were anastrozole and clomiphene - a pair of drugs used to block and/or reduce estrogen in the body. Sonnen appeared on Fox Sports 1 to discuss the failed drug test later in the day.

"These are perfectly legal substances. These are not performance enhancing drugs, these are not anabolics, these are not not steroids of any kind," the former middleweight title contender said on "America's Pregame" show on FS1. "It's very tough to be caught on this. Look, they changed the rules and I've gotta comply with the rules, I don't resist that at all."

But Sonnen stated that after the Commission made Testosterone Replacement Therapy or TRT illegal in February, the banned drugs he tested positive for were necessary while he transitioned from taking TRT.

"There is a transition period and I couldn't have been more open or transparent about it, whether it was on UFC Tonight or different interviews in different places. These are the medications you have to go on to lead a healthy life," Sonnen said. "If they ask you to choose between my health and my sport, that's not a choice I can make. I have to choose my health."

UFC president Dana White also went on the show to talk about the situation and said both the Commission and Sonnen had fault in this situation, but that the Commission should have done a better job handling things since banning TRT.

"I'm not shocked. My reaction isn't shock - this has been lingering. This stuff was legal, TRT was legal," White said. "Then the Nevada State Athletic Commission said it's illegal now and it's gotta go away. But there are going to be effects of stopping this thing cold turkey. It just doesn't work that way.

"Both are at fault," he continued. "The commission could have laid it out better for how they were going to end this thing, what was going to be banned and what wouldn't be banned, and (consider) the guys coming down off it. But again it's a matter that they're not very educated on, TRT. It's the thing that's made this whole thing impossible anyway. And it's Chael's fault too because he should have called the commission to tell them what his doctor told him to do to come down off the stuff."

Sonnen did admit he knew that the substances were banned, but went on to say there's a difference between what an athlete takes on game day and when he's "out of competition," claiming he would not be actively taking the drugs while competing. WADA (World Anti-Doping Agency) does have both drugs on its in and out of competition banned list though. Despite this, Sonnen insists his use was necessary.

"I had to take these drugs because they banned testosterone. So to be in compliance you have to stop with testosterone. Now I had a legitimate need for testosterone - I was a user not an abuser," he said. "So when you come off this and you have a medical need, you must transition. ... This also serves as a fertility drug, which I didn't know. I was having fertility issues, that's not part of my life I wanted to share with you or anybody else, because that can be very embarrassing. But now it's out there. The number one reason I took it was to transition and number two it's a fertility medication."

Many have taken to social media to call Sonnen a hypocrite after he publicly ridiculed Wanderlei Silva after he refused to take a drug test at the same time Sonnen failed the one he actually took. But Sonnen claims the two situations to be radically different, as he has been open and transparent about his usage of these drugs.

Sonnen hopes that the Commission will hear his appeal and work to make these situations less problematic in the future.

"They never tell us the rules until they tell us we're in violation of them. ... I do not offer you today that I should be able to be around the rules, that's not the case at all. But the rules are very hard to follow when it's a continual moving target and it's not equal for everybody," he said. "This is the only test I've taken in the history of my competition in Nevada that didn't come with a disclosure form. I still haven't heard from (the Commission). I've went all the way to the Attorney General's office but they still haven''t called me back."

At this point Sonnen will not be eligible to fight at UFC 175, but no decisions about additional changes to the card have been made.