The magic of Chael Sonnen is something that the blossoming jiu-jitsu community can get behind. Whatever he touches shortly turns to gold.
By Walker Van Wey • Aug. 13, 2019

It seems that every other grappling event FIGHT PASS puts on now consists of a BJJ super fight. Kinektic is no different and set to feature one of the founding fathers of BJJ super fights.

After his exit from the UFC in 2013, Chael Sonnen dipped his toes back into the grappling world with a super fight against 26-4-1 Andre Galvao. It was a match that gave a shot of adrenaline to the grappling world when the American Gangster was set to take on a man who had run through a who’s who of grapplers to that point.

“I was, I think the second ever,” Sonnen said. “I think the first was Randy Couture vs Jacare [Souza] and then I was second.”

In what was set up to be a massacre, Sonnen harnessed his inner… Chael Sonnen and nearly shocked the combat sports world until a late rear-naked choke was secured giving Galvao the win and it was beginning to appear that this may be the trend to come when MMA veterans tried stepping to specialists who have spent a lifetime honing one discipline. 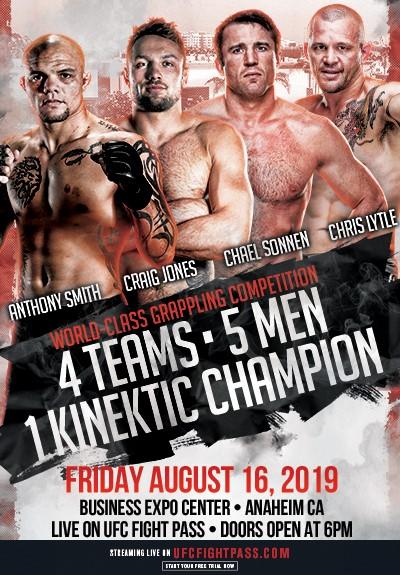 The forced respect from the MMA veterans was also met with a vibe that Sonnen found cold and unwelcoming.

“When Randy Couture went against Jacare, it was supposed to be a murder,” Sonnen recalls. “It ended up going to a draw. When I was against Galvao it was all the way up to the time limit before he got a submission. This was a big disappointment for jiu-jitsu. Instead of the jiu-jitsu community rising up and saying it’s a great thing, they did just the opposite.”

While Sonnen isn’t exactly a stranger to winning to the crowd’s chagrin, there was a disappointment inside after the community rejected the idea of more exposure, more competition, resume-building matches and overall more appreciation for the sport. Instead of getting bitter, Sonnen saw an opportunity and launched Submission Underground that same year. The grappling promotion that consists of tag team matches, super fights, couple’s jiu-jitsu and more with Sonnen on the mic is an obvious lock now but was far from guaranteed success in the beginning.

“It was an experiment,” Sonnen said. “We understood that we could get competitors. A lot of people really wanted to compete, and it was kind of an interesting formula. As good as these guys are, they’re not always household names and we still are in a star-driven business.”

Sonnen flowed seamlessly from MMA to jiu-jitsu figure and personality. Submission Underground continues to grow, the names associated are bigger and bigger with every show and he’s front and center in other promotions as well.

The magic of Chael Sonnen is something that the blossoming jiu-jitsu community can get behind. Whatever he touches shortly turns to gold.

One of the earliest examples of a UFC villain, Sonnen showed the Colby Covington’s, Joanna Jedrzejczyk’s and Kevin Lee’s of the world the ropes in selling fights. If you have thick enough skin to do it, there’s sometimes more value in filling the vacant “villain” role.

An early pioneer of MMA/jiu-jitsu crossover, it’s become so commonplace with active fighters Sonnen now sees a shift in interest in grappling. Not only from fans but from mixed martial artists as well.

“It used to be the opposite where grappling was like a segue before you went into MMA,” Sonnen said. “It still is, in large part. It’s an in between, but now we’re seeing that in reverse. We’re seeing MMA guys then go over and want to grapple. Whether it’s for a workout, or whether it’s just for the competition, we’re seeing guys want to go and participate in rolls.”

As a team captain for the inaugural Kinektic team grappling event, it’s impossible to predict the future but with Chael’s career moves often turning to long term success and an already upward trending sport like jiu-jitsu, Kinektic, Submission Underground and grappling as a whole appear to be in good hands.

“There are a lot of MMA fans but not a lot of guys who do MMA,” Sonnen said. “When I go to train, there’s six guys, there’s ten guys at practice. For jiu-jitsu there’s not a lot of fans, but when I go to practice every day there’s 70 people in there of all ages and genders. You’ve got all these participants but you don’t quite have the fans yet. Our theory was that that was because it hadn’t been displayed in a fan friendly way yet.”

A vast change of pace from laying out a wrestling mat on a basketball court, Sonnen sees the state of grappling as a success already. But now that he’s retired from MMA, his abundance of time that can be devoted to an already successful promotion could pay dividends for the sport.

While the future of jiu-jitsu is high up in the air, one thing is a guarantee. It’s still going to be the same old Chael.

“I will never manufacture conflict and I never have,” Sonnen said. “If I don’t mean it, I won’t say it. I’ve been called a smack talker before but I didn’t see it that way. I’m a truth talker. I just called it the way I saw it. I’ll do the same thing in grappling.”