“I would like those tough moments to appear in my career as early as it could be,” he said, reflecting on the fight with Morales. “In this case, I can see the mistakes I made and fix them in order to improve, so I could be a stronger fighter.
By E. Spencer Kyte • Jul. 5, 2019

Every few years, a new country or region emerges as a rising force in the mixed martial arts world.

Canada had its moment, as did England. Brazil has always been a major exporter of elite talent, but even the South American hotbed experienced ebbs and flows when it comes to the level of prospects rising to the highest levels in the sport. The same goes for the United States.

2017 and 2018 featured the rise of competitors from Australia and New Zealand, as these fighters started making a great deal of noise across various divisions, most notably middleweight, where Robert Whittaker and Israel Adesanya both lay claim to UFC gold.

Tucked in behind the Oceanic uprising over the last couple years has been the emergence of China as a major producer of potential top-end MMA talent.

While Weili Zhang has quickly risen to the fore and is slated to challenge for the strawweight title later this year against Jessica Andrade in Shenzhen, China, the most intriguing name to emerge from the group of fighters to arrive in the UFC has been Song Yadong.

Just 21 years old, the bantamweight has already amassed a 14-4, 1 NC record, including victories in each of his first three Octagon appearances. This weekend, the talented upstart makes his first Stateside appearance to compete during International Fight Week, where he’ll face Top 15 fixture Alejandro Perez.

“This will be a good chance to prove myself and I want to grasp this opportunity on such a big event,” he said of the chance to compete on a loaded fight card like UFC 239.

The bout with Perez was initially scheduled to take place four months ago at UFC 235 — the first massive Las Vegas pay-per-view event of the year — but shortly after the bout was announced, Song was forced to withdraw from the contest, leaving Perez to face Cody Stamann in a fight he ultimately lost.

“I tore a ligament in my left knee, so I dropped out,” explained the surging 21-year-old, who carries a six-fight winning streak into Saturday’s contest. “But my manager knew that I wanted to fight with Alejandro, so it ends up we get a rematch, which is very pleasing for me.”

There have been a number of impressive rookie campaigns in the Octagon over the last several years, and while Song’s doesn’t measure up to the 12-month run turned in by the likes of Adesanya or even his countrywoman Zhang, the Team Alpha Male representative’s first full year on the roster showcased his abundant potential. 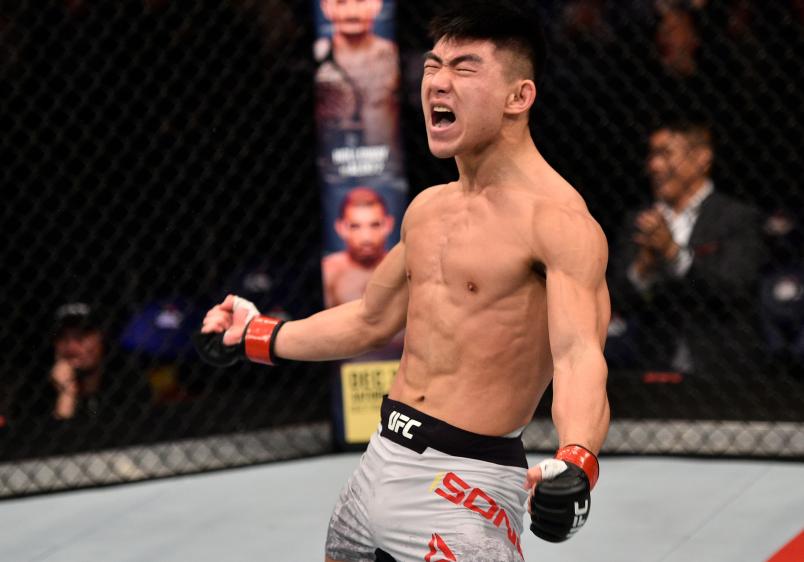 SHANGHAI, CHINA - NOVEMBER 25: Song Yadong of China celebrates after his victory over Bharat Kandare in their featherweight bout during the UFC Fight Night event inside the Mercedes-Benz Arena on November 25, 2017 in Shanghai, China. (Photo by Brandon Magnus/Zuffa LLC via Getty Images)

SHANGHAI, CHINA - NOVEMBER 25: Song Yadong of China celebrates after his victory over Bharat Kandare in their featherweight bout during the UFC Fight Night event inside the Mercedes-Benz Arena on November 25, 2017 in Shanghai, China. (Photo by Brandon Mag

After making quick work of Bharat Khandare in his debut, Song opened a lot of eyes with a second-round stoppage win over Brazilian veteran Felipe Arantes in his sophomore outing. Then last November, the explosive newcomer capped his rookie campaign in the Octagon with a hard-fought victory over Vince Morales.

“I would like those tough moments to appear in my career as early as it could be,” he said, reflecting on the fight with Morales. “In this case, I can see the mistakes I made and fix them in order to improve, so I could be a stronger fighter.

When asked about the lessons and takeaways from the bout with Morales, his answer was not what you would expect from a young fighter who hasn’t encountered much difficulty during his ascent to the highest level in the sport.

“Before every fight, you need to think of some worst scenario that could happen to you,” he began, “so that during the real fight, if there’s anything happening that is not in your control, at least it is something you might have already thought of and you’re mentally prepared to deal with those moments.”

Now, the talented bantamweight who has been fighting professionally since he was still in his teens is venturing to “The Fight Capital of the World” and taking a considerable step up in competition in squaring off with the 14th-ranked Perez. 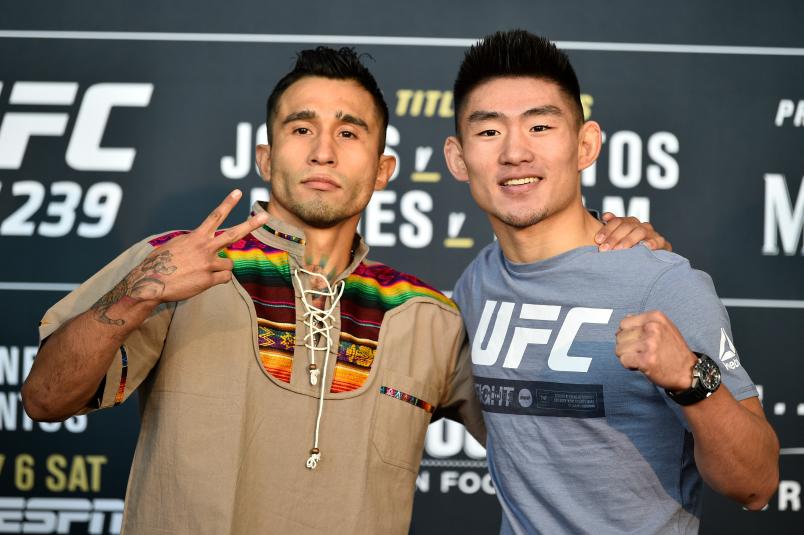 While his knee injury scuttled their initial meeting, the time off also allowed Song to really dig into his recovery and training in Sacramento, where the talent level in the room is high and he’s surrounded by coaches and competitors that know what it takes to succeed at the highest levels in the sport.

“I have been in Sacramento for the last six months,” said Song. “We were supposed to fight in March, but unfortunately I was injured, so I was focusing on my recovery (before getting back to preparing for a fight).

“I think it has been good for me to really get down to training and concentrate on how to improve my skills,” he added. “And now I think I’m at least 30-percent better than before.”

And having had plenty of time to study Perez and prepare for this weekend’s bout, Song knows he’s in for a tough fight, but believes he has a great opportunity to make a statement with his performance on Saturday.

“Alejandro is a good boxer and has very good conditioning,” he said of the man he’ll face this weekend. “He is a tough fighter and I’ve been working on my striking the most, so I bet I will have a high chance to knock him out.”

Regardless of whether he gets the victory by knockout or is forced to dig deep and grind out another win as he did against Morales in November, a fourth straight UFC win — and seven-fight winning streak overall — would force people to sit up and take real notice of the Chinese upstart, even in a division as deep and competitive as bantamweight.

And once he gets through his North American debut this weekend, Song has a clear goal in mind for where he’ll end up following his sophomore year competing inside the Octagon.