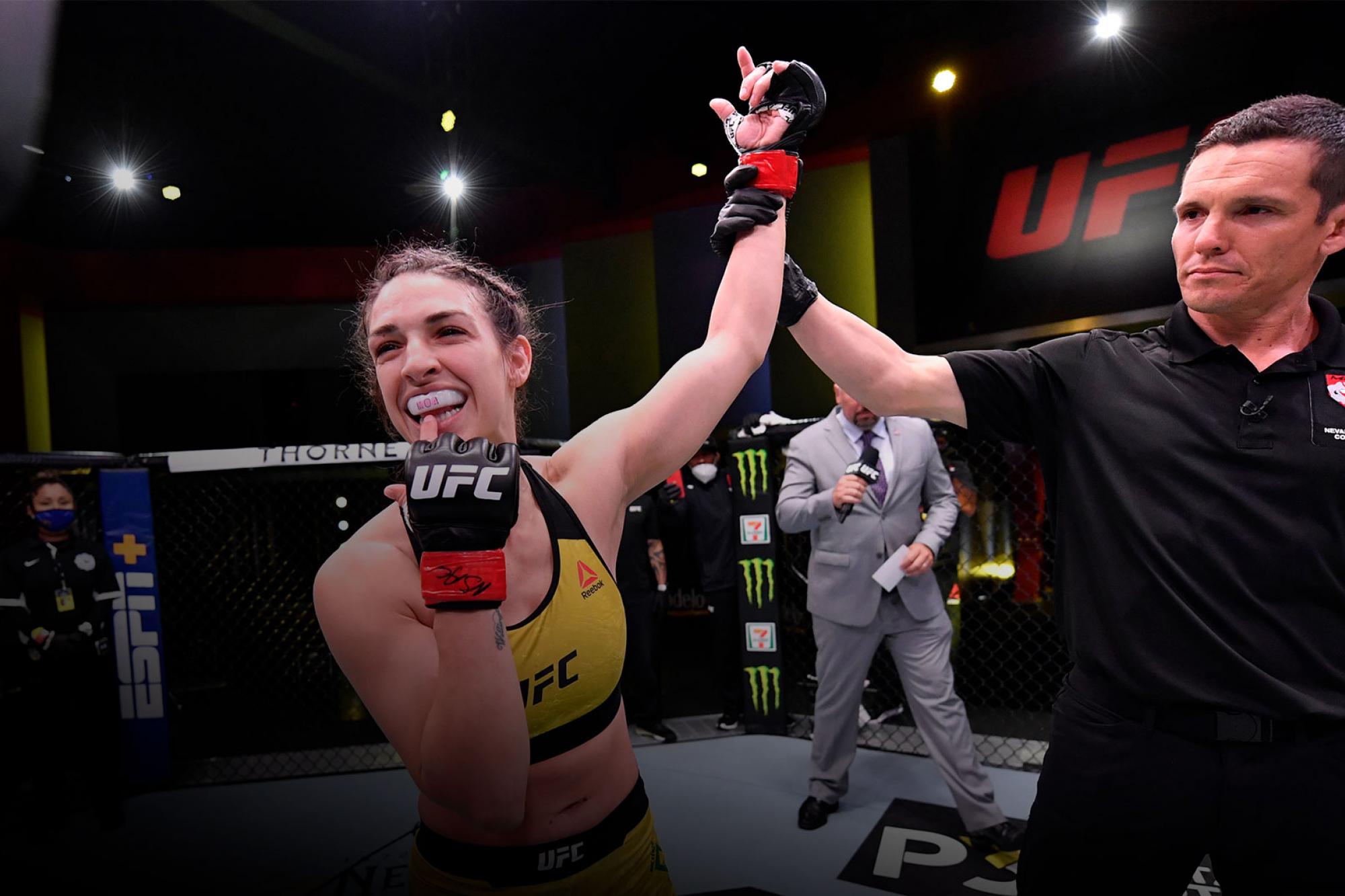 Something Is Different About Mackenzie Dern

Mackenzie Dern has refocused her mentality and career after suffering her first loss last October
By Jon Gagnon • Sep. 17, 2020

When Mackenzie Dern suffered the first loss of her pro career to Amanda Ribas last October, she admits that she wasn’t happy having that “zero” erased from her record. An undefeated fighter carries an aura about them and it’s not something many fighters are able to accomplish once they’re several fights into their UFC career.

But with that “zero” comes a lot of pressure. Expectations are sky-high. So, like many fighters before, and many to come after, suffering that first loss can lead to many more benefits than negatives.

“It sucks to have the zero taken away from the record,” Dern said. “But something has changed. I feel like I’m a totally different fighter now. I have so much momentum and my training and mindset is so much more focused than I ever was. I hope everyone that follows me has noticed that because it feels great to get back on a winning streak. Now I’m back to where I left off (No. 15 in the rankings) and I’m 10 times better.”

If Dern truly is 10 times better now than when she was previously ranked No. 15, the rest of the women’s strawweight division should be put on alert. The first of which is UFC veteran Randa Markos, who will square off with Dern at UFC Vegas 11 on Saturday in what’s pegged as the most stacked Fight Night card of the year.

“Randa is most dangerous with her counter attacks in the standup,” Dern said. “She’s smart on the ground, but because she’s been in so many three-round fights, she knows her distance, reach and movement. That will be the biggest difficulty - to keep the pressure and not let her move as much.”

It's a game plan not many would expect. Because of Dern’s high-level jiu-jitsu, most would expect her to try and get Markos to the mat. But Dern is anxious to show off her newfound focus and evolution in all aspects of the fight game.

“I’m going to go in there and pressure her so much with striking and if she gets knocked down maybe I’ll get an amazing submission and a performance bonus,” Dern said.

When Dern says, “an amazing submission”, she’s referring to a Submission of the Year-level finish. It wouldn’t be the first time. In her last fight, Dern secured a kneebar submission against Hannah Cifers. It was the first leglock submission in women’s UFC history.

“For me, it was a surprise that it was the first because it’s so common for us,” Dern said of leglock finishes in the jiu-jitsu community. “Now I’m like, okay, let me look at all my jiu-jitsu submissions that are so common for us because I’m going to start letting them out.”

Dern plans to unleash some more unique finishes to add to her chances of getting that Submission of the Year title. And after deciding to hold off for a bit after the fight against Cifers and have a full camp, she may get a chance this weekend against Markos.

“I couldn’t be happier to have a full camp. I felt like I evolved so much in these four months,” Dern said. “The people who know me from my first UFC notice how much better I look and that I’m starting to show my true potential.”

The skills have always been there. But it sounds like Dern’s added confidence has come as a result of an increased focus on the mental game. She admits that before her pregnancy, she had missed weight before and other times would go on vacation after a fight. Those days are long gone.

“Now that I’m at this new level of a fighter, I’m going to put pressure on and the fans are really going to enjoy it,” Dern said.