Tragedy And Adversity Shaped Sodiq Yusuff's 2020, But The Featherweight Contender Is Focused On The Future.
By Zac Pacleb, on Twitter @ZacPacleb • Apr. 8, 2021

Even the most optimistic person took one on the chin in 2020 for a multitude of reasons, and Sodiq Yusuff is no exception. The self-described “positive guy” kicked off 2020 on a high note. He scored a tough decision win over UFC veteran Andre Fili at UFC 246, and a few weeks beforehand, he received his U.S. citizenship. From there, the path was clear: Top 10 opponents, more finishes and making good on his clear potential.

For various reasons, that all fell apart for Yusuff. First, the COVID-19 pandemic halted the world and left Yusuff without anywhere to train. Tragedy struck after that when his brother passed away, his second sibling lost since joining the UFC in 2018. Although fighting wasn’t front of mind after that, he planned to fight Edson Barboza on Fight Island, a bout against a big name that would at least keep his ascent going. But, because of pandemic-related reasons, Yusuff wasn’t able to get his U.S. passport, and the fight was scrapped.

That left Yusuff without a fight - and subsequently, a source of income - for more than a year.

“It definitely wasn’t easy,” Yusuff told UFC.com. “I’m a pretty positive guy, so I try to spread that positivity, so sometimes you gotta deal with the negative stuff on your own just because I don’t want to impact people on the negative vibe, but it was very rough. It don’t matter how tough you are. When I lost my big brother this year – and it’s like me and my mom and my brother – nobody wants to bury two brothers. That really, really hit us really, really rough.”

As he is wont to do, though, Yusuff found a silver lining amidst one of the toughest periods of time in recent memory. It’s a trait born from his childhood, moving from Lagos, Nigeria, to the United States when he was nine years old with his mother and his brother. Although Yusuff is the second youngest of 16, he assumed the big brother role for all his siblings since then, cultivating the mature optimist who exists today, spinning his personal struggles in the most constructive and uniting ways possible. 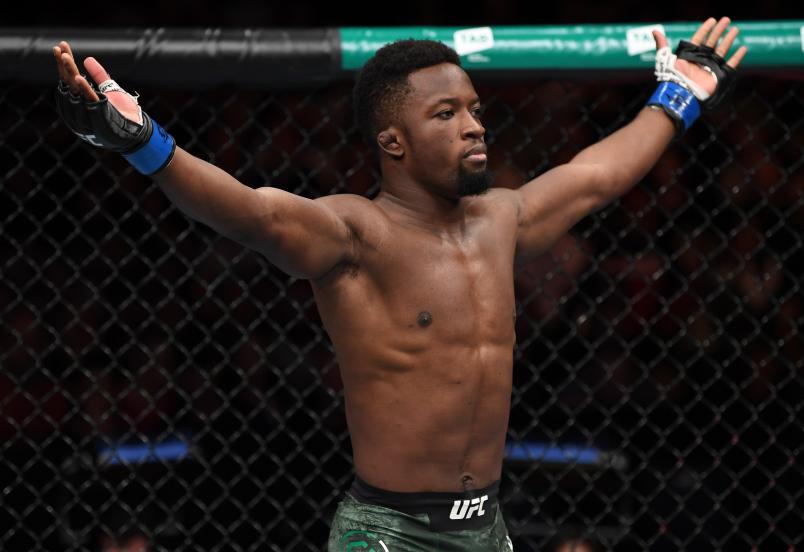 Sodiq Yusuff celebrates after his TKO victory over Suman Mokhtarian of Australia in their featherweight bout during the UFC Fight Night event inside Adelaide Entertainment Centre on December 2, 2018 in Adelaide, Australia. (Photo by Jeff Bottari/Zuffa LLC

Allen has been a bit of a dark horse prospect over the last few years. Through seven UFC fights, he is undefeated, but bouts of inactivity have nipped a bit of hype in the bud. It’s a matchup Yusuff figured would happen eventually but assumed “eventually” would be a couple years down the road when the two were established at the top of the division. Yusuff understands, though, saying this is one of the “craziest fights” UFC matchmakers could put together and one of fitting quality for a premier slot on ABC, which he called “super cool.”

“I was like, ‘Oh, wow. Look at that. They’re giving your boy some shine,’” Yusuff said. “This is the natural progression I expected from my career. It’s just now that you’re in it, it’s like, ‘Hey, that’s what I’m talking about.’ I remember when I was a kid watching these people on TV, and now I’m going to be on ABC. Everybody has ABC. There’s going to be a lot of eyes on me.” 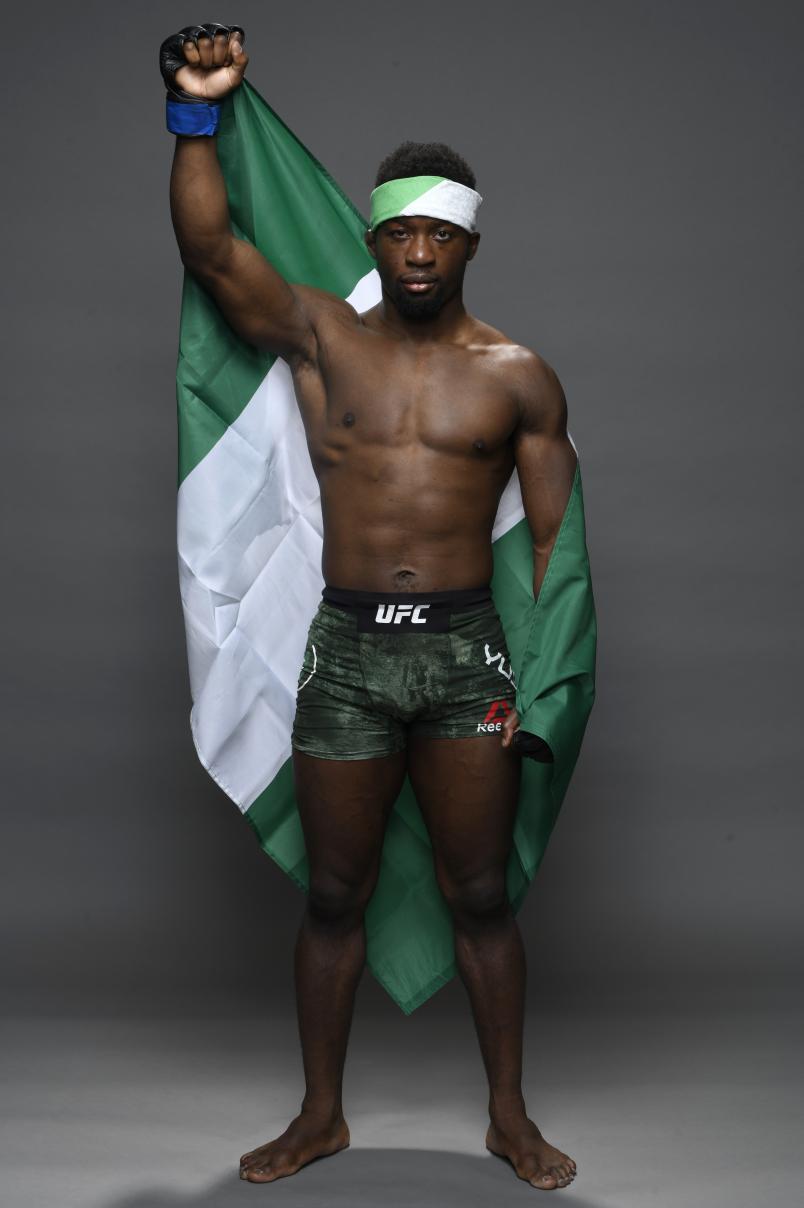 While this fight is Yusuff’s biggest yet, as Arnold is his first ranked opponent, Yusuff isn’t looking at this opportunity as any sort of big break. In his mind, that came when he faced Gabriel Benitez on UFC 241’s main card. He wanted to thank the UFC brass for the spotlight with a big performance in that fight and he delivered, landing a vicious counter right hand to earn a first-round TKO win.

Yusuff believes he made good on the belief showed from the matchmakers and expects similar situations from here on out, with this current matchup falling in line with that. He gives a sly smile when he admits he was curious if he and Allen would get bumped up to the main event after Darren Till pulled out of the headliner against Marvin Vettori, although he was quick to say he wasn’t wishing ill on anyone.

A win over Allen, particularly an emphatic one, could launch Yusuff into those headlining spots he is pining for in the future. Even despite more than a year’s worth of inactivity, Yusuff believes he still holds all the momentum he built through Dana White’s Contender Series and his first four fights in the Octagon, just based on the way he goes about his business.

“I don’t feel like the momentum is calmed down at all just because of my fighting style,” he said. “I feel like I’m one of those guys, once you watch me fight, it’s like, ‘Oh, I remember (him).’ You’re going to remember instantly. I’m not going to switch it up on y’all, so the momentum is always going to be there as long as I have the opportunity to fight. That’s why I’m always happy. I’m in the UFC. A lot of people aren’t blessed with this opportunity because that’s what it is at the end of the day. This is something people dream of, and it’s something that I definitely dreamed of when I was a kid, so I’m happy to be back.”

While both fighters are well-rounded, Yusuff and Allen each prefer the standup game and have shown technical proficiency even in firefights. Yusuff has a knack for finishing, but also a solid adaptability in the middle of the fight that was exemplified in his shift to a grappling attack against Fili to seal that decision. 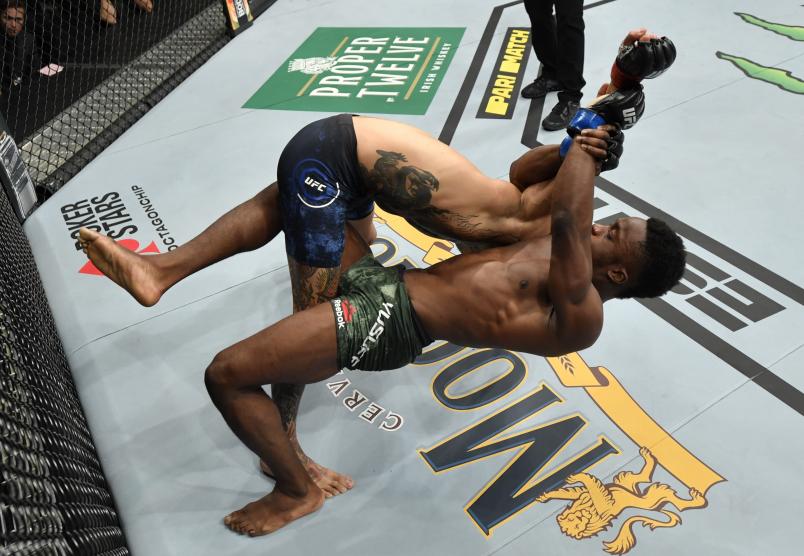 Sodiq Yusuff of Nigeria wrestles Andre Fili to the ground in their featherweight fight during the UFC 246 event at T-Mobile Arena on January 18, 2020 in Las Vegas, Nevada. (Photo by Jeff Bottari/Zuffa LLC)

Although Yusuff hasn’t had a chance to show his skills in the Octagon in more than a year, his work ethic is well-documented, and once the gyms opened up in Maryland, he got right back to it. Coincidentally, he was focused on facing southpaws when he got the call to fight Allen, a lefty, leaving Yusuff to feel like the timing was “meant to be.”

As far as his game plan, Yusuff is mostly hush-hush about giving away tactics, but he did say he is looking for the finish. He mentioned that there’s a joke around his gym that he’s been in camp for more than a year while waiting for a bout. Once he got Allen in his sights, he started honing in on a plan for success, and whatever he does have planned has required a weekly rotation of training partners.

The near-15-month wait between fights held adversity and tragedy for Yusuff, but now that fight week is here, his signature smile and laugh are on regular display. Once the fight begins, it’s safe to assume his laser-focused stare will be visible as well. It’s a moment he has anticipated and expected, and he is taking it all in as well. The journey to his first Top 15 fight wasn’t the smoothest of roads, but now that it’s here, he’s locked in on taking advantage of the moment.