The up-and-coming featherweight has a chance to start 2020 off with a bang and make the jump from prospect to top-15 threat.
By Zac Pacleb, on Twitter: @ZacPacleb • Jan. 13, 2020

Sodiq Yusuff laments a little as he reflects on his bout on Dana White’s Contender Series in 2018, not because he’s upset with his performance – a unanimous decision win – but because he felt like he was part of a particularly entertaining bout with Mike Davis.

“After that fight, I was like, ‘Damn, if we were in the UFC when that fight happened, that would have been Fight of the Night,’” he said.

To Yusuff’s credit, that fight is the most-viewed Contender Series fight on UFC’s Youtube page, with more than five million views and a bevy of comments lauding the match.

The generally humble Yusuff is matter-of-factly confident in his entertainment value as a fighter, but as to how that exciting style came to fruition, he offers up a general shrug of a statement.

When he does make an effort to entertain, though, it’s appointment viewing. Before his fight with Gabriel Benítez on UFC 241’s main card, Yusuff said he wanted to reward the confidence the matchmakers showed in him by putting on a spectacular fight. He turned in a TKO near the end of an entertaining first round that saw both fighters rocked and left Yusuff with a cut above his right eye.

After the fight, Yusuff thought he took more damage than he needed to because he sought the finish, but the risk paid off in the form of a step up in competition – Andre Fili. The UFC veteran is coming off four wins in his last five fights, most recently a Performance of the Night-worthy knockout over Sheymon Moraes in July 2019 at UFC Sacramento.

“I know for sure we got a good chance of getting Fight of the Night,” Yusuff said. “I see a lot of stuff I could look forward to. A lot of shots I see that I can land, so hopefully I get a bonus after this one.” 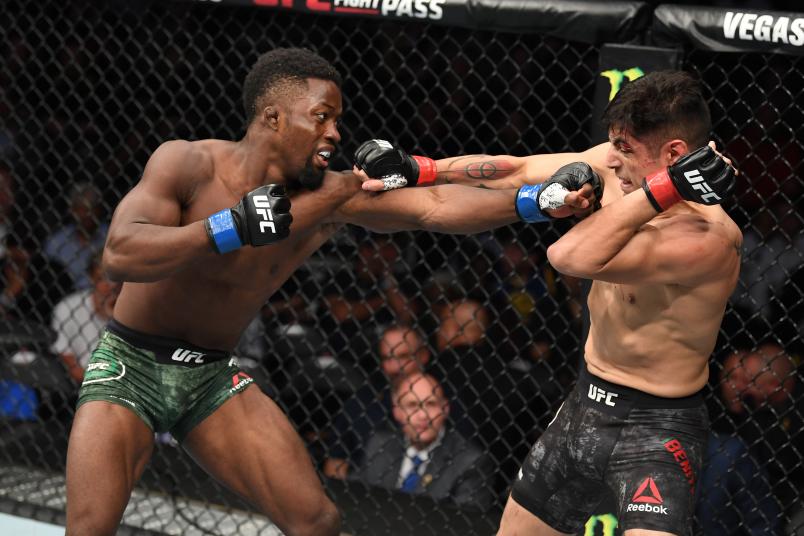 ANAHEIM, CALIFORNIA - AUGUST 17: (L-R) Sodiq Yusuff of Nigeria punches Gabriel Benitez of Mexico in their featherweight bout during the UFC 241 event at the Honda Center on August 17, 2019 in Anaheim, California. (Photo by Josh Hedges/Zuffa LLC/Zuffa LLC via Getty Images)

ANAHEIM, CALIFORNIA - AUGUST 17: (L-R) Sodiq Yusuff of Nigeria punches Gabriel Benitez of Mexico in their featherweight bout during the UFC 241 event at the Honda Center on August 17, 2019 in Anaheim, California. (Photo by Josh Hedges/Zuffa LLC/Zuffa LLC

Recently, former featherweight champion Max Holloway cited Fili as his toughest opponent in his career. Considering Holloway took on Jose Aldo twice, along with the cream of the featherweight crop, that nomination turned some heads, including Yusuff.

That said, Yusuff wouldn’t elaborate on whether he’d approach this fight with Fili in a more conservative way or the “take one to give one” fashion that he took with Benítez, but he did acknowledge Fili’s talents.

“I try to think everybody hits the same way I hit,” Yusuff said. “Sometimes I’ll take a little bit of a risk to put on a show, but at the end of the day, with those tiny gloves, if you hit, you’re going to connect.”

As the cerebral Yusuff approaches his fourth bout under the UFC banner, he’s aware of the steam he is building around his career. He calls it “kind of surreal” but is quick to say he has always carried a knowledge of his own skills since the day he started training. With that in mind, Yusuff said the biggest learning curve during his time in the promotion hasn’t been anything directly fight-related.

“Sometimes, when these fights happen, it’s like, the next thing you know, you’re in the backroom, and you’re like, ‘Oh, the fight already happened?’” Yusuff said. “You’re never in the moment to soak it in, so as each fight went on, I’ve been able to absorb it a little bit more.”

When he steps into the Octagon in T-Mobile Arena, it will be his second fight in Las Vegas. His first, coincidentally, was the one that earned him a UFC contract, and also the one he views as his first UFC fight. The closing of that loop has Yusuff primed to climb toward a top-15 opponent should he defeat Fili, which is no easy task. So far, Yusuff has passed each test with a mature showmanship, and this fight is nothing if not a sure bet to entertain.

As Yusuff’s career momentum builds, so does the attention. He’s aware of it, but he’s keeping an arm’s length distance from his own hype as he begins his 2020 campaign.

“I know what I bring to the table,” Yusuff said. “But it feels better when other people see it, too. But, at the end of the day, you can’t read much into the hype. You got to be your own No. 1 fan, and I’ve been aware of my skills since day one.”