Sodiq Yusuff Is Still ‘That Guy’

Bouncing Back From His First Loss In The UFC And A Slew Of Health Issues, Sodiq Yusuff Wants To Make It Clear That He Isn't Going Anywhere
By Zac Pacleb, on Twitter @ZacPacleb • Mar. 11, 2022

Sodiq Yusuff could not figure out what was wrong. Coming off his first loss in the UFC to fellow featherweight prospect Arnold Allen, he wasn’t feeling like his usual, highly motivated self. Instead, he felt lethargic and assumed it was just a letdown after dropping a fight, so he pushed his body and went on long runs hoping to get over the hump.

“I called my coaches and I thought I was done with fighting,” Yusuff told UFC.com. “We weren’t thinking about my martial arts career. I lost both of my brothers, and now I’m sick. A lot of thoughts start going through your head, and I didn’t want to tell my family because I didn’t know what was going on.” 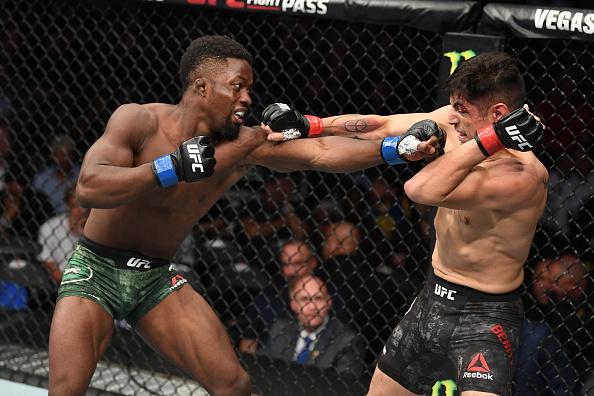 Sodiq Yusuff of Nigeria punches Gabriel Benitez of Mexico in their featherweight bout during the UFC 241 event at the Honda Center on August 17, 2019 in Anaheim, California. (Photo by Josh Hedges/Zuffa LLC)

After some time, Yusuff learned he was dealing with long-haul symptoms from COVID-19. Not ideal but, in some ways, he saw it as a relief.

“When I finally figured out what was going on, then I was all right,” he said. “Then, I was more appreciative of like, ‘Hey, I’m not going to die.’ (Laughs) I was like, ‘All right, as long as I can get healthy again, I’ll be able to get back on the horse and be able to get back to what I was doing.’”

Getting back on the horse, however, proved a much taller task than he anticipated.

In fact, Yusuff couldn’t spar for about six months, returning to full-speed action at the end of September. And given the way Yusuff likes to get after it in the gym, that period of time was “more depressing than it was frustrating” for the 28-year-old.

There was also a nagging sense of lost momentum. Before losing to Allen, Yusuff was breaking through in the featherweight division as one of its brighter prospects. After earning his contract on Dana White’s Contender Series against Mike Davis in one of the show’s best fights, Yusuff reeled off four straight wins (including two knockouts), culminating in a hard-fought decision over veteran Andre Fili at UFC 246.

Yusuff needed to wait for about 15 months before stepping into the Octagon against Allen in April 2021, so suffering another year-long setback was less than ideal in terms of building his stock within the promotion.

“I understand it from the UFC’s part like, ‘This guy is not active enough,’” Yusuff said. “They showed me a lot of love, but it’s one of those things where I need to be busy. Before the last fight, I told you guys I wanted to be busy afterwards, so fingers crossed we don’t lose visas, we don’t get sick. After this one, I promise you guys I’m going to be a lot more busy.” 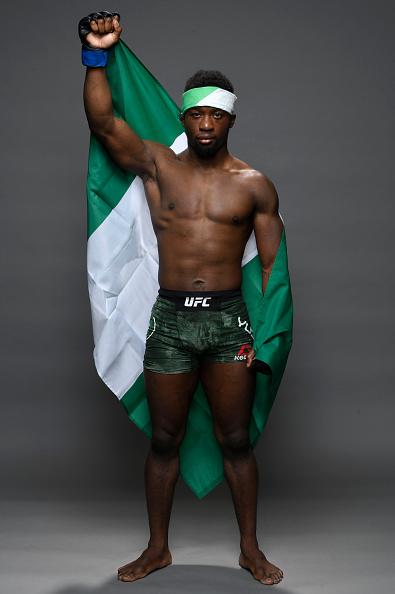 Sodiq Yusuff poses for a portrait during the UFC 246 event at T-Mobile Arena on January 18, 2020 in Las Vegas, Nevada. (Photo by Mike Roach/Zuffa LLC)

Before he can get to stringing fights together in 2022, he knows he has a difficult task on March 12 in the form of Alex Caceres at UFC Fight Night: Santos vs Ankalaev.

Caceres is debatably in the best form of his 11-year, 25-fight UFC career. He is on a five-fight winning streak, including a pair of submission wins. Yusuff respects Caceres’ skill set and expects the fight to come down to distance management and staying sharp in the weird grappling scrambles in which Caceres is sharpest.

Although the last couple of years have slowed Yusuff’s climb up the featherweight ladder, he understands the opportunity presented in taking out a respected veteran on a strong run of success.

“If I can break that (winning streak), it’ll just solidify me like, ‘All right, this guy is definitely the same guy we thought he was before the Arnold fight,’” Yusuff said. “It’s really cool to fight guys like Alex. It gives me the same kind of feeling I had when I fought Andre (Fili). I was a big fan of Andre even before I got to the UFC. Alex is another one of those guys that I’ve watched fight since I graduated (high school).” 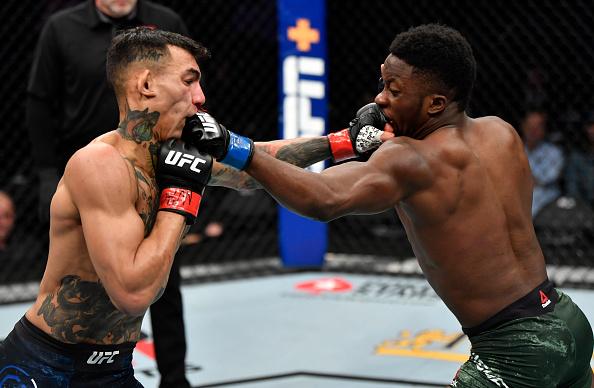 Andre Fili and Sodiq Yusuff of Nigeria trade punches in their featherweight fight during the UFC 246 event at T-Mobile Arena on January 18, 2020 in Las Vegas, Nevada. (Photo by Jeff Bottari/Zuffa LLC)

The fight is also Yusuff’s first chance to show his resolve in terms of bouncing back from a loss. He believes the biggest lesson he learned against Allen is the ability to switch from fighting on instinct to actively making decisive choices to turn the momentum in his favor.

Although Yusuff’s self-described “autopilot” is already good, the intentionality in his decision-making was a focus in training camp.

Of course, when Yusuff fights, it’s usually must-see television. He’s well-aware of the entertainment value he brings to the Octagon, even if it’s not necessarily intentional. Yusuff is the first one to admit he’s not really focused on giving fans something enjoyable and exciting to watch. It’s just the way he knows how to get the job done. 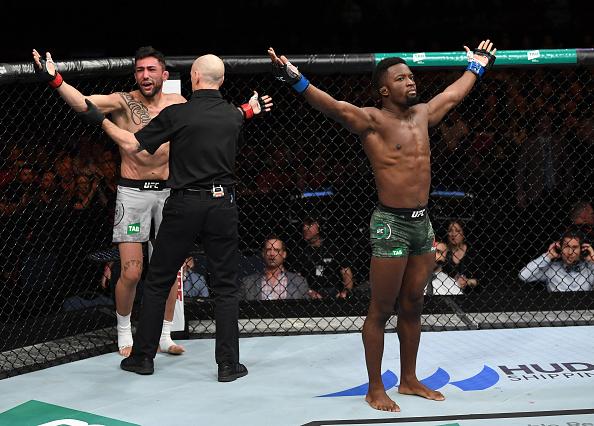 Sodiq Yusuff celebrates after his TKO victory over Suman Mokhtarian of Australia in their featherweight bout during the UFC Fight Night event inside Adelaide Entertainment Centre on December 2, 2018 in Adelaide, Australia. (Photo by Jeff Bottari/Zuffa LLC)

Fighting styles aside, this fight does seem like it’s a crucial one in the early part of Yusuff’s UFC career. Layoffs are fine, but it seems like Yusuff does have a sense of urgency around this one. “Activity” is a focus for him in 2022, and he’s hoping to make two or three more appearances this year. He is fully focused on this weekend’s business first, though, and although “Super” hasn’t made the walk as many times as he would’ve liked to in the past couple of years, it all feels familiar when it comes time to do what he does best.

“To be honest, every time I’m here, it feels like I just left,” Yusuff continued. “At the same time, it feels brand new. It’s a weird feeling. You’ll never get used to fighting someone in your underwear in front of millions of people. It’s same-same, but different.”