Fans Around The World Will Be Able To Use $UFC Fan Tokens To Vote In The First Poll Right Away.
Jun. 30, 2021

Fans around the world will be able to use $UFC Fan Tokens to vote in the first poll right away.

Fan Token holders will be asked to decide which fighter will be featured in Megan Olivi’s Walkout Report during UFC 264, which will see Dustin Poirier and Connor McGregor face each other in the third bout of their epic trilogy. 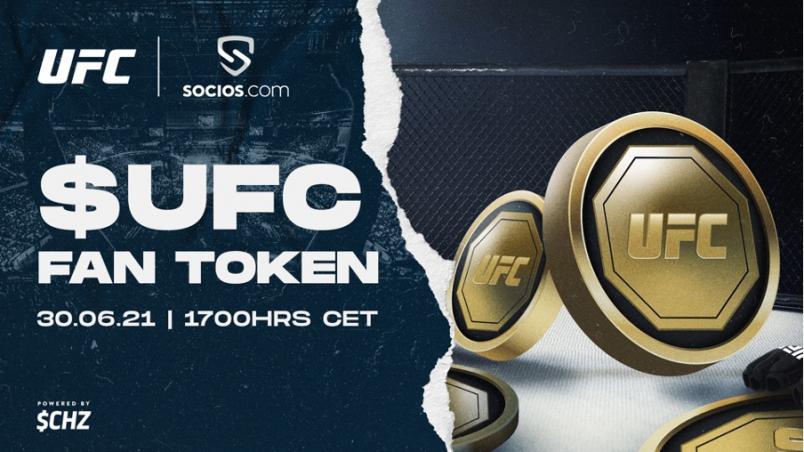 LONDON, JUNE 30, 2021 - Socios.com, the leading global blockchain providers for the sports and entertainment industry, have announced that the $UFC Fan Token will go on sale on the fan engagement and rewards app Socios.com from 17:00 CET on Wednesday, June 30.

$UFC Fan Tokens, which will be priced at €2 during the initial sale, will provide fans across the world with a powerful new way to engage with UFC®.  Fans will be able to use their $UFC Fan Tokens to take part in the first poll to be held on the app straight away.

UFC® fans will be asked to choose which main card fighter will be featured in Megan Olivi’s Walkout Report during UFC 264, which will see Dustin Poirier and Connor McGregor face each other in the third bout of their epic trilogy.  Fans will be able to choose between Sean O’Malley, Greg Hardy, and Stephen Thompson for the feature.

This will not be the only call that UFC® fans will be able to make ahead of this anticipated event. $UFC Fan Token holders will also be able to pick one of the questions that both Poirier and McGregor will be asked during the UFC 264 press conference, scheduled for the 8th of July.

UFC®, the world’s premier mixed martial arts organization, has made MMA into one of the fastest growing sports in the world, boasting a roster consisting of the highest-level athletes.  Socios.com is an authorized licensee and sponsor of the UFC®.

Driven by the central belief that transitioning passive fans into active fans is essential to the future of sport, Socios.com is a direct-to-consumer (D2C) platform that leverages blockchain technology to provide the world’s leading sporting organizations with the tools to engage with their respective global fan bases.

Created by Chiliz, the leading blockchain provider for the global sports and entertainment industry, Socios.com has major expansion plans for 2021 and are targeting many more Fan Token launches throughout the world. Socios.com has multiple office locations around the world and has already opened new regional headquarters in Madrid, Istanbul, São Paulo, and Buenos Aires. The company will open a new office in North America in the near future.

Alexandre Dreyfus, CEO of Chiliz and Socios.com said: “We’ve been building up to this moment for a long time. UFC is a true global sporting giant that attracts massive global interest. Fans are not linked to one particular geographical location, so Fan Tokens are the perfect tool to unlock incredible engagement, influence, and reward opportunities for MMA fans the world over.”

“We’re anticipating huge interest in the UFC Fan Token. Fans who want to partake are advised to download the Socios.com app and be ready to get their $UFC Fan Tokens when the sale begins on Wednesday at 17:00 CEST.”

$UFC Fan Tokens will be available to fans in most countries, with a U.S. launch planned at a later date.  Please visit Socios.com for additional details.