Soccer and MMA Share Sisterhood in Fight for Respect 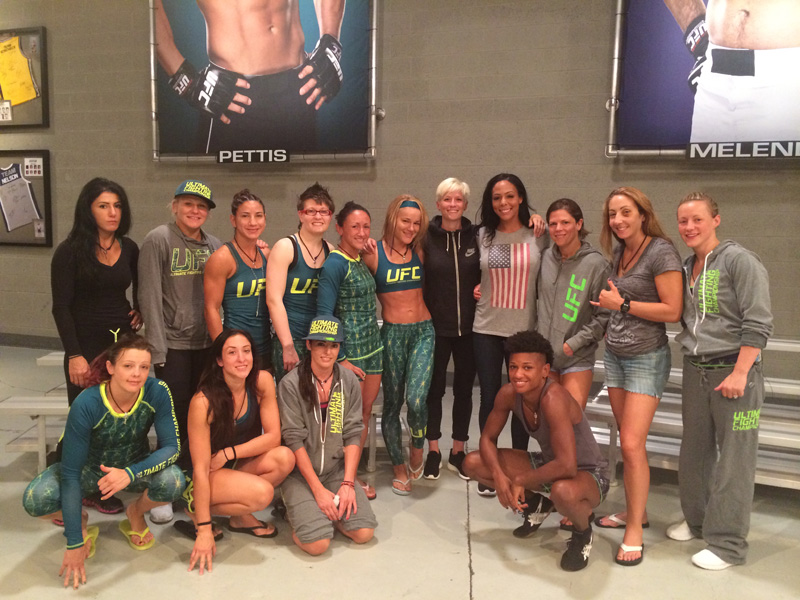 U.S. women's soccer national team member Sydney Leroux was impressed when meeting the cast from the latest season of The Ultimate Fighter, especially when realizing how many similarities her sport shared with mixed martial arts

In 1999, when the U.S. women's soccer team burst onto the international scene with a thrilling World Cup victory, it was clear the sport was here to stay and America was going to be a breeding ground for future champions.

Fast forward to their latest game, as the U.S. women's team once again showed their dominance with a shutout performance in the CONCACAF title game to not only win the tournament, but also punch a ticket to the next women's World Cup in 2015.

Before conquering their latest title run, two of the players from the women's team -- Sydney Leroux and Megan Rapinoe -- stopped by The Ultimate Fighter gym this past summer to visit with the best of the best in the women's 115-pound weight division as they fight for a chance to come the first ever UFC strawweight champion.

Leroux, who is an admitted MMA fan, loved the experience but also enjoyed the camaraderie shared between women from the two sports.  Soccer experienced many of the same growing pains when the sport first took hold in the United States and Leroux was excited to see even more professional female athletes get a chance to perform on the biggest fighting stage in the world.

"We go through a lot of the same things being a female professional athlete," Leroux said.  "We talked about that and we touched on that.  One of the girls has a kid and we have girls who have children on our team as well and we talked about that.  There's just a really big connection between female sports."

Ultimate Fighter hopeful Angela Hill was one of the competitors on the show who got to spend time with Leroux and Rapinoe while they visited.  At the time, Hill admits she wasn't an avid soccer watcher but once she was released from the house where competitors are sequestered from using television or the internet, she looked up Leroux and Rapinoe and was immediately impressed and inspired by their accomplishments.

"It's amazing and it's definitely inspiring for us," Hill said.  "Because even with the success of the show there's still a lot of naysayers and people saying girls can't fight.  I'm sure those same people were saying women can't play soccer and look at them now.  It's definitely cool to see that because I can look to them and see us doing well in the future and women doing well in the future even if it's 10 or 15 years down the road because now we're fighting on the biggest stage in MMA."

It may seem strange to compare a sport like soccer to mixed martial arts, but in terms of growth potential they are eerily similar.

When soccer exploded more than 15 years ago in the United States, nobody could have imagined how far the sport would go in such a short amount of time.  Women's MMA may have experienced a similar phenomenon when Ronda Rousey debuted in the UFC and now stands as one of the biggest stars in all of combat sports.

The historic season of The Ultimate Fighter is also proof that women's MMA is here to stay.  With the entire cast being comprised of female fighters for the first time in 20 seasons, this seems like the beginning of something special.

"Who thought women's soccer would be what it is right now? Probably one of the most popular female sports in the world and the U.S. women's national team is probably the most recognizable team in the world on the women's side," Leroux said.  "Who thought 20 years ago we would be here? We still have a ways to go but our fans and the people who are behind us, I couldn't be happier where we stand right now."

Both Leroux and Hill agree that a key to women's sports thriving is support within the ranks.  The uphill battle for acceptance in a gender skewed athletic market is always going to be tough, but sticking together and rooting for each other is a major factor in women across the world realizing these sports are here to stay and the level of competition is only going to get better and better.

"It's actually as female athletes it's good to be a fan of each other and push each other," Leroux said.  "You know because we lead the same lives and it can be hard.  It can be a hard thing sometimes so knowing you have people behind you that are going through the same thing, it can be cool."

Hill and the rest of The Ultimate Fighter cast did their part to support the women's soccer team this past weekend with a slew of messages directed at the players over social media.  Leroux and Rapinoe will undoubtedly do the same as the women from The Ultimate Fighter gear up for the final month of competition before the show finale airs on December 12 on FOX Sports 1 with the first ever strawweight champion being crowned.

The women's fighters, much like the best of the best in soccer, aren't going anywhere except up to the top of the sports stratosphere.

"The more attention that we get all together, soccer, basketball, MMA, what have you, the better it's going to be," Hill said.  "The more fans are going to get on board and accept that we are here, we're playing sports, we're entertaining and it's something to look at."