"Ever since we started pushing the last four years, we keep everything
positive, keep everything in a good frame of mind, so when people look
they get motivated." - Soa Palelei 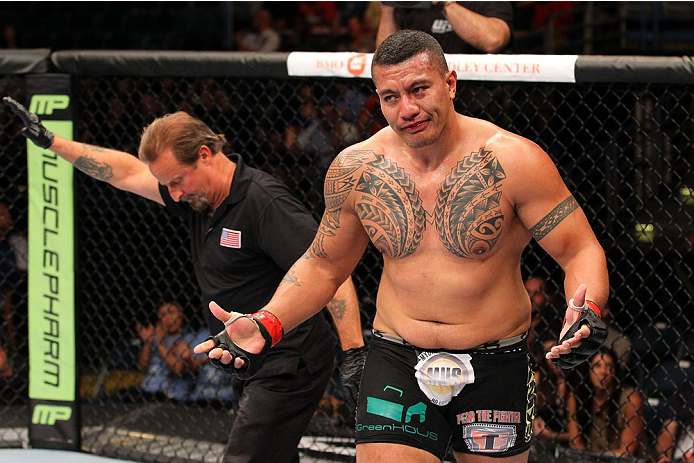 UFC heavyweight Soa “The Hulk” Palelei is a fighter making the most of his second chance.

Palelei has won his last 11 fights and is on a three-fight win streak in the UFC, with all those victories coming via KO or TKO.  He is also fast earning a reputation for his brutal ground and pound, knocking numerous opponents out cold from the top position.

But on June 28 at the Vector Arena in Auckland, New Zealand, he faces a tough test in former NCAA wrestler Jared Rosholt, who has won both of his UFC fights.

For “The Hulk,” it’s a long way from his earlier stint in the UFC’s Octagon. His 2007 debut ended in a lackluster TKO loss to Eddie Sanchez, and he was subsequently cut from the UFC’s roster. Palelei and his team began a relentless campaign of non-stop fights and social media promotion though, complete with the Twitter hash tag #HulktoUFC.  And after ten wins in smaller promotions and plenty of hustling, he was back.

“Back in 2007, it was a bad fight for me.  Now I’m back and I did do a big campaign where I pushed to get back to the UFC.  It was just a matter of getting wins and getting the fights, and I did that.  I went through stages where I was nearly having a fight every month, just to keep active and in the limelight with the UFC, where they can see I am winning and I am trying to prove that I belong in the UFC,” said Palelei. “Now that we’re here, we’re three fights into the UFC, it’s good, I’m on a roll.  But that stuff can get taken away from you at any moment.  That’s why being humble is very important. Win or lose, I go out there and give it my best.”

It’s worth noting that Palelei’s last loss came to one of the world’s best fighters in current UFC light heavyweight Daniel Cormier.  And “The Hulk” has an answer for anyone questioning the quality of his opponents.

“My last (loss) was against Daniel Cormier, where he kicked my ass and I sat in the back and I thought to myself ‘I hate losing, I never want to lose again.’ And 11 fights later we’re still here.  On a winning streak.  (For some people) There’s a lot of question marks over the opponents I fight.  You know what? People have gotta respect whoever steps in the cage, because you don’t know what’s going to happen,” said Palelei. “I think everyone’s a warrior that hops into the cage and fights.  Whether people think they’re underrated or overrated or whatever, people are stepping in there for a reason.  Obviously being in the UFC, you’re contracted with the UFC, and you’ve got the top of the top. They’re not gonna bring in anyone that’s not that good to the UFC.”

Talk to Palelei about his fighting career and the themes of hard work and humility quickly surface.  For those who follow “The Hulk” via Twitter or Facebook, that will come as no surprise.  Few can rival the Australian-born fighter and his team for output of motivational quotes.  Palelei, who recently signed on as an ambassador to the Make-A-Wish foundation, aims to inspire.

“Ever since we started pushing the last four years, we keep everything positive, keep everything in a good frame of mind, so when people look they get motivated. Our motto is train like a beast, that’s the whole thing.  When people look at (my posts) they think oh wow I wanna get in there and do the same thing, I wanna smash it, smash the training and live life.”

“Whether you’re from Samoa, Tonga, Fiji, they’re small islands.  And when people from there see me doing well or (UFC heavyweight) Mark Hunt doing well, that inspires them to get up and start lifting up and start training”.

Palelei, a father of three, hasn’t bought into his fame.

“I feel so privileged when people come up to me and ask ‘can I get a photo?’  It’s like, man, I’m not even famous. Let me get a photo with you. That’s the thing; you’ve gotta be humble or one day someone’s gonna hand you your ass.”

Palelei’s comeback campaign has earned him the ranking of #14 in the UFC’s heavyweight division. And while he offers a modest assessment of his own skills the 36-year-old has spent years traveling the world to improve his game, training with legends along the way.

“There’s better guys out there than me; I’m just another one of those guys that’s trying to climb the tree.  I’ve been doing this for 16 years, man. Plus, I’ve travelled around the world, Brazil, did my BJJ there, I went and did some training with BJ Penn and his camp in Hilo, I went to Japan and trained with the guys in Japan with (Kazuhiro) Nakamura’s camp with the Judo gold medalist (Hidehiko Yoshida). I’ve been around. I trained at Rico Chiapparelli’s gym at RAW back in the day when MMA wasn’t that big, that was in El Segundo.  I’ve been at Team Quest with Dan Henderson, Las Vegas with John Lewis.”

Palelei isn’t worrying about where he’ll be ranked in the division if he beats Jared Rosholt. When he talks about the prospect of victory, he stresses the word “if”.

“A little bit closer to the top, if I get a win over Jared.  If I get a win it just gets me closer to where I want to be.  I’m not too fussed about the rankings, whether I’m number 15 or number 10.  It’s good to know where you’re at but I’m not fussed with it because I just wanna get paid (laughs).  All I’m worried about is getting in there and getting the win bonus.  I’ve got bills to pay, I’ve got my kids’ school fees, and school fees are expensive. I’m sending them to these private schools, but that’s just me,” said Palelei.  “If I’m top ten in the world I can’t take that to the bank and say “hey, I’m top ten, can you just give me some money?” (Laughs) These guys will go ‘get out of the bank.’ So I just want to keep improving and keep pushing it hard.  Whether I get to fight for the belt in a year’s time, so be it, but at the moment I’m not looking at the belt or looking further; I’m just looking at getting through this fight, trying to get the win and moving on to the next one.”

Veteran Palelei thinks highly of his opponent Rosholt’s skills. Whether it’s just a brave face or what they truly believe, some fighters refuse to publicly consider the idea that they may lose. “The Hulk,” however, believes that anything can happen in an MMA fight.

The saying that anything can happen in an MMA fight is especially true in the UFC’s heavyweight division, where the instant KO is always a possibility.  Palelei is prepared for that reality and predicts that someone is getting knocked out.

“He’s an explosive fighter, I’m an explosive fighter.  I don’t see this going past the first round.  I expect some fireworks.  Either I’m gonna get knocked out by Jared or I’m going to knock him out, so one of us is probably going to fall asleep in that fight. So we’ll see, but after that, we’re true sportsmen so we’ll probably have a drink after it, have a feed and talk about the fight or something like that.”