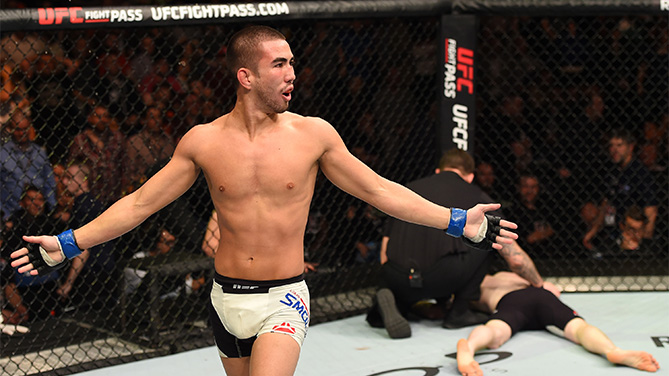 The packed house at Dublin’s 3Arena may have been disappointed that their man, Paddy Holohan, fell short of victory in his UFC Fight Night main event against Louis Smolka on Saturday, but they most certainly appreciated the back and forth war the two flyweights delivered before Hawaii’s Smolka emerged with a second-round submission win.

“I never say I’m the best or that I was born gifted, but when I do come out, I give you everything,” Holohan said.
Related content: Octagon interviews | Louis Smolka Backstage Interview

Thrust into the main event slot after the show’s original two headlining bouts fell apart due to injury, Holohan closed the distance quickly after referee Marc Goddard waved the fighters into battle, and “The Hooligan” got the takedown. Holohan fired off knees to the body as Smolka sought a D’Arce choke, but to no avail. The two subsequently scrambled, Holohan maintaining control throughout the hellacious pace. With a little over two minutes left, Smolka appeared to settle into the top position, but Holohan was relentless in his attack and the two rose. A kick to the head by Smolka finally slowed Holohan down, but only briefly, as the two went back each other and kept the crowd roaring, even though it was Smolka jarring the Irishman with a few shots to the head as the round closed.

The stand-up exchanges in the first minute of round two favored Smolka, but only slightly, prompting Holohan to get the takedown. Holohan proceeded to take the Hawaiian’s back, but with a little less than three minutes left, Smolka got loose and then back to his feet, where he tried to sink in a guillotine. Holohan got loose, but Smolka stayed in control in the top position. As “Da Last Samurai” moved into the mount, he fired off strikes with both hands, the crowd trying to spur on a comeback from their man, but it was not to be, as Smolka sunk in a rear naked choke that produced a tap out at the 4:09 mark of the second round.