Smolka Ready for Dublin and the World 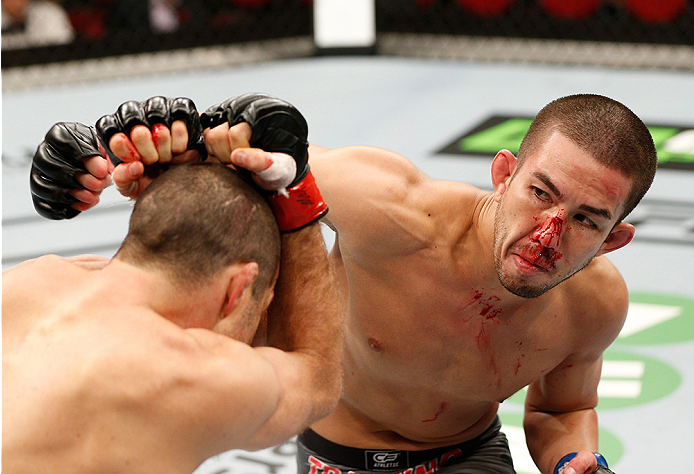 Louis Smolka will be the betting favorite this Saturday when he faces hometown favorite Paddy Holohan at UFC Fight Night in Dublin, but the Hawaiian has the hungry mindset of an underdog looking to prove something in the flyweight co-main event.

“I’m not looking ahead or looking past him at all,” he said. “I made that mistake with Cariaso and I don’t intend to do it again.”

Chris Cariaso was Smolka’s ticket to the next level when the then-unbeaten prospect faced off with the veteran Cariaso in Cincinnati in May of 2014. Three rounds later, Cariaso had a split decision victory and Smolka had his first loss, one he never saw coming.

“I never thought he would have beat me,” Smolka said. “I was like ‘of all the people who are gonna beat me, it’s not gonna be this guy.’ What was he gonna do, outpoint me? I wasn’t scared of his strikes or his submissions. What’s he gonna do, hit me and run away? And he did exactly that.”

Cariaso went on to a UFC 178 title fight against Demetrious Johnson. Smolka didn’t.

“Da Last Samurai” has won two straight since then in impressive fashion, knocking out Richie Vaculik to earn Performance of the Night honors last November, and then decisioning Neil Seery at UFC 189 in July. With a win this weekend, Smolka will likely crash the top 15, and with the wide open nature of the 125-pound weight class, a title opportunity could be just another couple wins away. But he will always refer back to the Cariaso fight and what could have been. Was he ready for a title fight in September of 2014?

“I would have took it,” he laughs. “At the time I had a lot of momentum. I was undefeated, I had a bunch of finishes, I had a lot of hype behind me, and I don’t know, I just let it get to my head.”

That honest assessment is a surprising one, with Smolka appearing to be one of the more levelheaded 24-year-olds in the fight game.

“That’s all for show,” he deadpans. “I’m just pretending to be normal.”

What he can’t hide is his talent and cool in the Octagon. Smolka has enormous potential, but at the same time he’s shown off a lot of what he can do already. Whether on the feet or the mat, Smolka can handle himself and get an opponent out of there, all the while picking up style points along the way. And the way he sees it, he’s just getting better.

“With my strength and conditioning, I feel like I’m a lot more of an athlete now,” he said. “I worked a lot on my fast twitch movements and all-around explosiveness and strength. I don’t want to say that I’m great now or anything, but it’s improved a lot. I have zero traditional lifting experience, so that’s really helped a lot.”

Usually it’s the other way around, with athletes adding technique, and not technicians adding athleticism, but Smolka has already proven to be far from typical.

“I feel like I came in as more of a technician than an athlete,” he explains. “You could say I was an endurance athlete, but I wasn’t an explosive and fast twitch athlete, and I’ve been really working on that.”

Of course, all that can go out the window when an arena packed with Dubliners screams for his head, but with the UFC not having any shows in Hawaii as of yet, the Kapolei product has had to get used to being the road warrior, and this Saturday’s bout as the visitor is no different.

“I understand that the crowd doesn’t want me to win and it’s something I just have to make my peace with,” he said. “You have to know that they’re going to boo you and that they want their hometown boy to win. And if we ever had an event in Hawaii, it would be exactly the same thing.”

Fighting in that kind of hostile territory could make someone dream of the days when he was serving as a mascot for Papa John’s pizza. Not Smolka, though he does have some fond memories of his pre-fighting gig.

“I got some free pizzas out of that,” he laughs. “And when I’m cutting weight I think about it.”

An exciting flyweight with a sense of humor? That’s good news for the division, even if Smolka isn’t chasing the spotlight with the same intensity that he trains with.

“I don’t try to get attention,” he said. “I don’t really work very hard on social media, and I’m not trying to put myself out there and sell myself. I feel like a good product should sell itself. When I’m ready, everyone will know. I can use that comparison with (UFC featherweight champion Jose) Aldo. When he came out, I don’t think he did any PR. He just came out and murdered people and everybody noticed and just knew he was the guy. That’s kind of what I hope to be.”

So will Louis Smolka be Jose Aldo in Dublin?