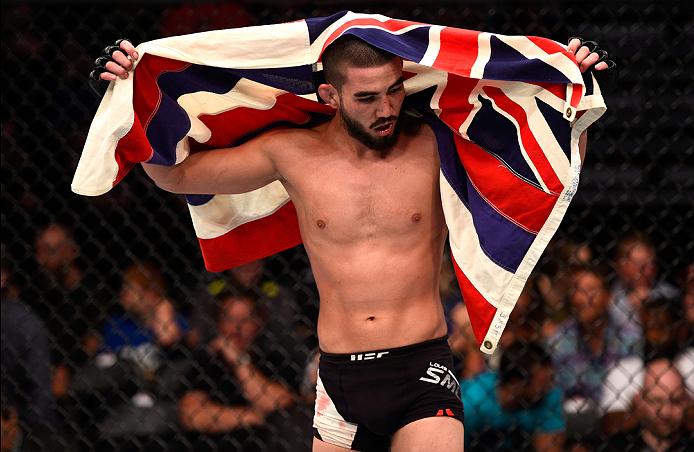 “I’m way behind,” he said. “Had I beat Chris Cariaso that night and then I beat Demetrious (Johnson), I’d have been the youngest champion in UFC history. So I’m way behind right now.”

“That night” was in Cincinnati in May of 2014. The 22-year-old Smolka was unbeaten and coming off a win over Alptekin Ozkilic in his UFC debut. But it was the veteran Cariaso who eked out the split decision win.

“I don’t know what happened,” Smolka said. “I was overconfident, I took the kid lightly and I slept on him, and that’s when you’ll lose. But I try not to dwell on it. That was the worst performance I ever had and I never want to go out there and fight like that again.”

He hasn’t, winning four in a row with three finishes leading up to his Saturday matchup with Brandon Moreno. But if you wonder why the Cariaso fight still stings, it’s because the now retired “Kamikaze” parlayed that victory into a fight against flyweight champion Demetrious Johnson four months later. It’s something that shouldn’t bother the Hawaiian standout now, as he’s ranked ninth in the world at 125 pounds and rising rapidly. He’s not content with being a contender, though.

“I believe in myself,” he said. “I believe that I’m going to be one of the greatest ever. That’s just how I feel and I believe it.”

So how does he catch up to where he wanted to be?

The next one is this weekend against Mexico’s Moreno, who comes in on short notice, replacing the injured Sergio Pettis. A late opponent switch is inconvenient, but Smolka is unmoved.

“It really can’t change anything at this point,” he said. “I had a full camp, so I’m just gonna make weight and show up to the fight at this point and fight whoever’s there.”

It’s going to be Moreno, who gave a good account of himself on season 24 of The Ultimate Fighter before losing to Alexandre Pantoja. Smolka hasn’t been watching the show, which features 16 flyweights vying for a shot at Johnson’s crown.

“No, I haven’t, but from what I saw (of Moreno), I’m not entirely that impressed.”
RELATED: Smolka matchup with Brandon Moreno | Fighter bio

Guess “Da Last Samurai” is confident of win #12 coming in this weekend.

If Smolka lives up to his favorite status, it will double his paycheck and be another notch in his belt, but Moreno doesn’t hold the name recognition of Pettis, so it likely won’t move him up the flyweight ladder. That doesn’t bother him either.

“No, it doesn’t,” he said. “Whatever. 125 pounds, make the weight, let’s get it. I wasn’t a hundred percent convinced that Pettis was gonna show. I really wasn’t, and I kinda thought this might happen.”

So like any fighter, he deals with what he’s given. No, beating Moreno won’t get him a title shot, but he knows that if he keeps winning, that day will come. And when it does, if it is Demetrious Johnson still at the top, he’ll be ready.

“I don’t even have a blueprint,” Smolka said. “I just believe in myself right now. I can’t really explain why, but I just feel like I can beat him, and I feel now is my time. It’s kind of like when you gamble and you’re on a hot streak – you just feel it and you can’t really explain it, but you know it’s gonna work.”