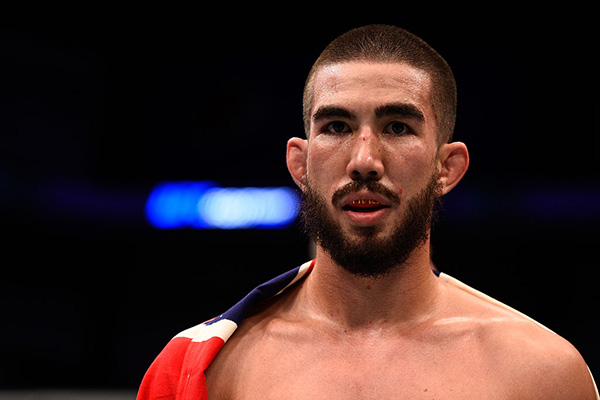 After a rough stretch that has seen him lose three straight, flyweight Louis Smolka is taking a very Bob Marley approach to his upcoming UFC 219 bout against Matheus Nicolau on Dec. 30.

“I just have faith that no matter what, everything will be all right,” he said, immediately bringing to mind the Marley classic “Three Little Birds.” He laughs when I point this out to him, and it’s clear that while he knows the importance of a win in Las Vegas, pressure hasn’t taken away his ability to enjoy the process leading up to the fight. The 26-year-old knows he can fight at this level; he just needs to go out and be at his best when it’s time to put the mouthpiece in.

He should be ecstatic, because if Smolka has displayed anything in his nine-fight UFC run, it’s that he shows up to throw down. Whether on the feet or the mat, Smolka is always chasing a finish, and three times he got his wish in the Octagon, with Performance of the Night bonuses begin tagged on to his knockouts of Richie Vaculik and Ben Nguyen.

But after putting together a four-fight winning streak from 2014 to 2016 that had him on the verge of the title picture, a trio of defeats against Brandon Moreno, Ray Borg and Tim Elliott brought his momentum to a halt.

“I’m kinda disappointed, I’m not gonna lie,” Smolka said. “I want to get wins. It’s kind of a bad place to be. You look at my record and it kinda sucks and makes me feel bad. But at the same time, I did have some good fights. It wasn’t too bad a year, but I can do better and I can be better.” 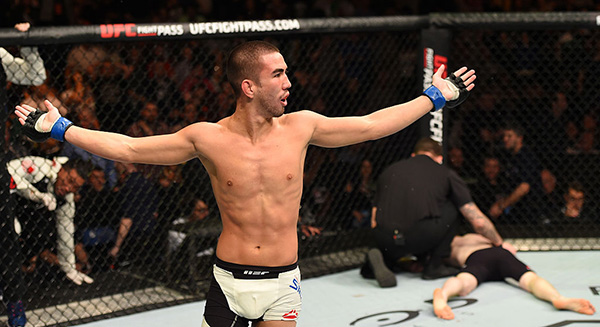 Looking a little deeper at the losing streak, there are positives to be taken away, not the least of which was his Fight of the Night war with Elliott in April that served as a firm rebuke to anyone who says they don’t like groundfighting. But with Max Holloway ruling the featherweight division, Yancy Medeiros on a three-fight winning streak and Rachael Ostovich recently making a smooth transition from The Ultimate Fighter 26 to the UFC roster, Smolka wants to keep the momentum going for his native Hawaii.

“I don’t want to be the guy that drops the ball,” he said. “I’m trying to keep the ball rolling and keep the wave flowing. I don’t want to mess it up – I want to win. We need UFC Hawaii out here and we need to keep winning so we can get it.”

It’s the rallying cry from every Hawaiian fighter and something you don’t see anywhere else in the United States. Smolka believes the reason is simple.

“It’s a small community,” he said. “We all know each other and have all trained together in the past and all see each other around. It’s like everybody’s on the same team.”

And while Hawaiians in the UFC used to be a rarity, usually Hall of Famer BJ Penn and one or two other fighters from the island, these days, the MMA community is producing more and more UFC level fighters, and they’re setting the stage for a new generation to follow them in the coming years.

“I always felt like we always had somebody in the UFC or competing on the biggest stages,” Smolka said. “We’ve been in MMA a long time, and it wasn’t an if (they would get to the UFC), but a when. I feel like we’re part of the next generation coming up. That first generation was BJ and a couple guys. Now we have all the kids who grew up watching them and grew up wanting to be MMA fighters getting their shot.”

Smolka is hungrier than ever to succeed. He admits that he “wasn’t entirely focused on fighting,” in 2017, but after the jolts only a loss can give a fighter, he’s back on track and ready to perform. As for the future, he’s only looking as far as Dec. 30.

Is “Da Last Samurai” maturing on us?

“I like to think I’m never gonna be mature,” he laughs. “I’m a big kid forever. That way I can keep learning.”