The Smoke Has Cleared For Andrea Lee

Andrea Lee Turned In A Career-Best Year In 2021 And Hopes To Ride That Momentum Into UFC Fight Night: Blachowicz vs Rakic
By E. Spencer Kyte, on Twitter @spencerkyte • May. 10, 2022

Success is hard to come by when you feel unsettled, and for a couple years there, Andrea Lee just didn’t feel settled.

“I think I was just struggling trying to figure out where I felt most at home,” said Lee, who kicks off her 2022 campaign with a matchup against fellow Top 10 flyweight Viviane Araujo on Saturday. “I haven’t been traveling so much, and that had been stressing me out a lot — spending time away from my daughter — and I think that all of those things might have played a part, not to mention all the stress that was also going on in my life after my separation and other things.”

For a couple years beginning in the summer of 2018, Lee’s personal life became a major part of her professional story, after her then-husband was charged in a domestic violence incident involving the UFC contender and evaded police for nine months.

Andrea Lee attempts to submit Antonina Shevchenko of Kyrgyzstan in their women's flyweight bout during the UFC 262 event at Toyota Center on May 15, 2021 in Houston, Texas. (Photo by Josh Hedges/Zuffa LLC)

When we spoke ahead of her fight with Joanne Calderwood in Abu Dhabi — which took place on her anniversary to Aaron — she recalled having to be in court for custody hearings on the Monday morning after her win over Montana De La Rosa.

“I’m not going to lie and say I’m able to just block it all out and train 100 percent because it does get to me at times, but I’m able to focus on the task at hand,” she said at the time.

Unfortunately, her efforts didn’t translate into positive results, as Lee dropped consecutive bouts against Calderwood, Lauren Murphy, and Roxanne Modafferi to head into last year on a three-fight slide.

And then things finally started to click into place.

Now in a happy, charmingly sweet relationship with fellow UFC competitor Tony Kelley and settled into a better training routine, Lee turned in arguably best year of her career in 2021, posting a pair of finishes over Antonina Shevchenko and Cynthia Calvillo to solidify her place in the flyweight hierarchy. 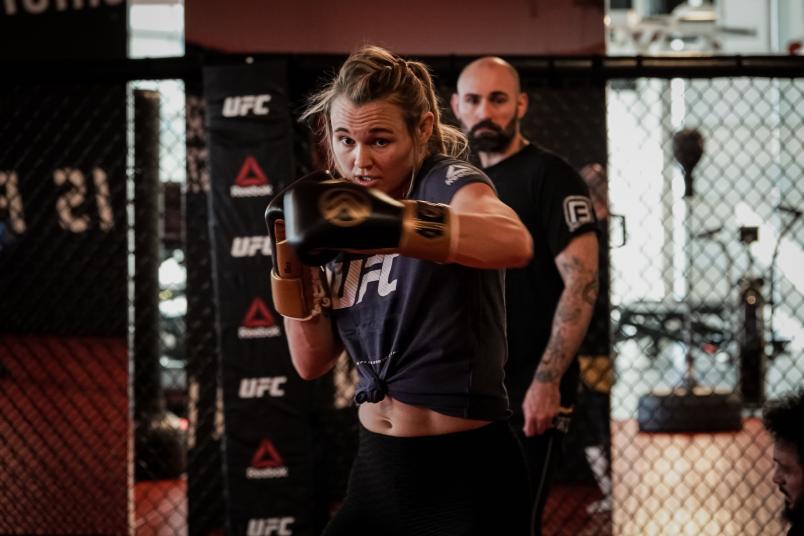 “The smoke has just finally cleared, and I’ve been able to just finally focus on my training, and my life, and things just seem to be going much smoother,” said Lee, who is 5-3 inside the Octagon and 13-5 overall heading into this weekend’s clash with Araujo. “My boyfriend plays a big key in all of that. He’s been helping me, he’s been teaching me a lot of the things that he’s really good at — his tricky style, the way he sets things up have been rubbing off on me — also, I’ve gotten back to work with one of my former trainers, Grandmaster Carroll Baker.

“I’ve finally been able to put together everything at home, so I don’t have to travel out of town, and I really think that has benefitted me mentally.”

Not having to spend much time away from her 10-year-old daughter Ainslee has been a major positive development for Lee, who acknowledges that showing her daughter that tough times don’t have to derail your dreams was a key driving force in helping her navigate her way through those difficult years.

“Not today, but someday when she gets older, I think that she’ll be able to understand and maybe it will give her motivation in her own future,” Lee said of her daughter. “Sometimes you just have to push through and make lemonade, you know?

“Everybody faces struggles, and it depends on how you decide to deal with it. You’re either going to break or you’re going to grow from it, and I just choose to never break. And I don’t want her to ever break from anything, either.” 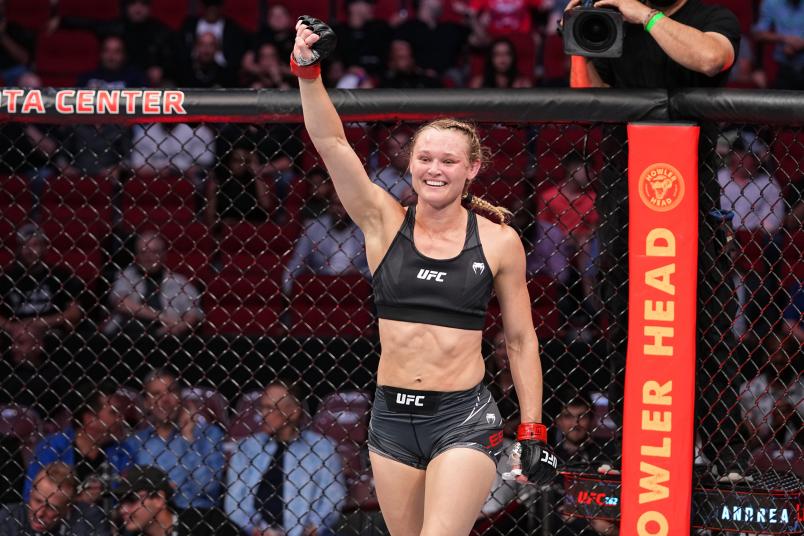 Andrea Lee reacts after defeating Antonina Shevchenko of Kyrgyzstan in their women's flyweight bout during the UFC 262 event at Toyota Center on May 15, 2021 in Houston, Texas. (Photo by Josh Hedges/Zuffa LLC)

Lee dealt with it all by continuing to battle, in courtrooms and the UFC cage, and now that she’s got things moving in the right direction and set up properly for herself, the 33-year-old standout is ready to continue pushing forward in the flyweight division.

Standing in her way this weekend is Araujo, a tough 35-year-old stationed one spot ahead of her in the rankings and coming off a unanimous decision loss to perennial contender Katlyn Chookagian, who battles Amanda Ribas on Saturday’s fight card in Las Vegas.

“Viviane is a very tough opponent, and the way she has been able to go out there and put some females away, I know that it’s not going to be an easy fight,” Lee said of her Brazilian opponent, who earned wins over De La Rosa and Modafferi prior to her loss to Chookagian last year. “For me to know that I’ve earned the right to stand across from (flyweight champion) Valentina (Shevchenko), I have to fight all of these other high-level girls, and I know that Viviane is in the way, and I have to get through her first.”

Following her win over Calvillo last November, Lee mentioned she would like to fight in front of a crowd again, suggesting February’s pay-per-view event in Houston as a possible return date.

When the bout with Araujo was first proposed, it was initially targeted for Brazil, before that card was unable to come together and the bout was re-routed to the UFC APEX. 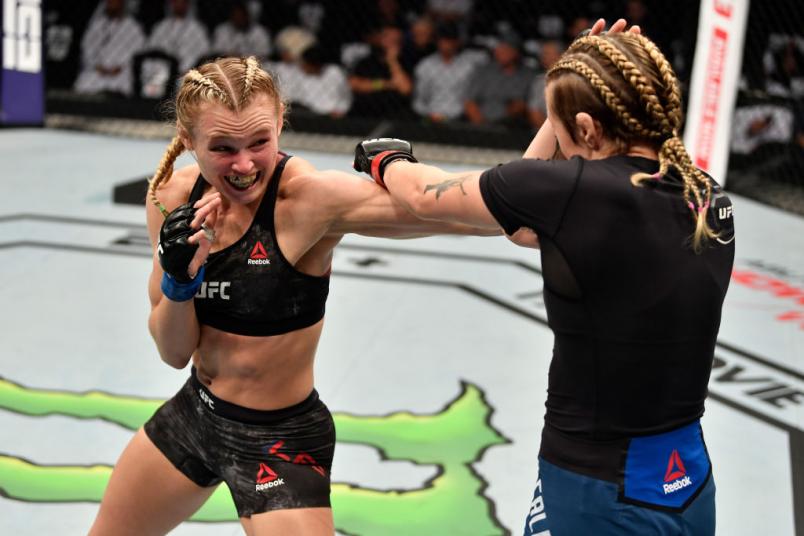 “I fought Roxanne without a crowd, and you could hear everything and everyone,” said Lee, when asked about returning to Las Vegas rather than competing in Texas or in front of a large audience. “It’s just weird to me. It was kind of like sparring; I felt like I was in my home gym.

“At least they’re allowing some people in, which is still enough to drown out your own breath,” she added, laughing about how unnerving it was to hear everything throughout her 15-minute bout with Modafferi.

While not a massive crowd like the one that packed the Footprint Center in Phoenix last weekend for UFC 274, Saturday’s audience at the UFC APEX should be at full throat once Lee and Araujo step in because the flyweights each have a fan-friendly style that should make for an exciting encounter.

“Viviane is a heavy striker, and she’s also a great grappler; I think we match up well together,” Lee said of the pairing. “I’m used to having people come forward, trying to take my head off.”

And now that the smoke has cleared and she’s finally feeling settled, Lee is back to doing the same thing herself.