With Stasiak unable to get Munhoz to the mat until the final seconds of the first round, he was forced to stand with the Brazilian, who showed off a diverse kicking attack to pile up points and take the opening stanza.

It was more of the same from the forward marching Munhoz in round two, but Stasiak’s busy attack kept it interesting throughout as he closed the gap on the scorecards.

In the second minute of round two, the fight went to the mat, but the action stalled, prompting a restart from referee Neil Hall. Once standing, both fighters scored with hard shots, but with under two minutes left, the fight returned to the canvas with Munhoz taking Stasiak’s back before the two stood in the final minute. 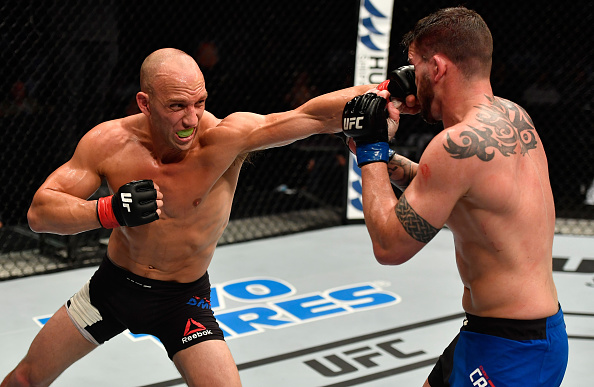 In a meeting of American middleweights, Trevor Smith shut out Chris Camozzi over three rounds.

A Smith takedown opened up the significant scoring in the first round, but Camozzi fought well from his back as he looked for a submission. Smith (15-7) was persistent in his attack, and he got out of his opponent’s grip and back to his feet, keeping Camozzi (24-13) stuck against the fence as he worked his swarming grappling game.

Smith’s grappling continued to rule the day in round two, with his ground strikes also cutting Camozzi in the process. And while Camozzi tried to turn things around in the final frame, Smith refused to let him back into the fight, and his ground domination made things easy on the judges, who awarded him the victory by scores of 30-27 and 30-26 twice.

Brazil’s Joaquim Silva made it three for three in the UFC with a close split decision win over Sweden’s Reza Madadi in a lightweight bout.

Silva was shooting daggers at Madadi with his eyes before the bout began, but it was Madadi who was able to use his takedowns and ground attack to take the opening round.

The Brazilian had a better start to round two, as he scored a flash knockdown with a left kick, and while Madadi returned fire with a hard right hand and two spinning backfists later on, Silva’s shots looked to be the more damaging ones, with another left kick to the head with three minutes left briefly wobbling the “Mad Dog.” Madadi refused to stop battling, though, thrilling the crowd.

Madadi took the bout to the mat to begin round three, subsequently dodging two guillotine choke attempts from Silva. Once standing, a right hand by Silva dropped Madadi and had him in trouble briefly, and while the ultra-game Swede shook off the effects of the blow, Silva was able to scramble into the top position on the mat and land some strikes and finish strong.
CHECK OUT FULL UPDATED RESULTS FROM STOCKHOLM

Bojan Velickovic spoiled the homecoming of Nico Musoke, stopping the Stockholm native in the third round of their welterweight bout.

Musoke took the bout to the mat in the opening minute, and he landed several hard strikes there until the two rose midway through the frame and kept it standing for the rest of the first five minutes.

The competitive standup action didn’t let up in round two, with a takedown by Velickovic perhaps breaking open the close bout on the scorecards. But in the third, Velickovic took the judges out of the equation with a right to the head that staggered, then dropped, Musoke. Another right hand on the downed Sweden native brought in referee Kevin Sataki to stop the fight at 4:37 of the final round. 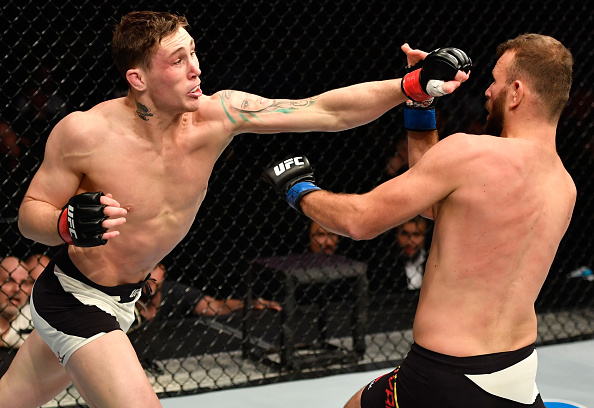 British welterweight prospect Darren Till made a triumphant return to the Octagon, decisioning Jessin Ayari over three rounds in his first bout since October 2015.

Calm, cool and collected, Till had an impressive first round, rocking Ayari twice with left hands and even tossing in a pair of takedowns to keep his opponent guessing.

The left hand continued paying dividends in the second frame, as Till put Ayari on the deck in the opening minute, but the German recovered quickly and almost locked in an armbar before Till pulled free. With 2:45 left, Ayari got to his feet and started swinging before locking Till up for a brief spell. After separating, Till put Ayari down with the left once more, and then the elbows started flying, but the gritty Ayari survived the round.

Till took his foot off the gas a bit in the final frame, but he remained in control, landing more than enough blows to wrap up the round and the fight.

It may be a sporting cliché, but Bosnian lightweight Damir Hadzovic snatched victory from the jaws of defeat in the Fight Night Stockholm opener, knocking Poland’s Marcin Held out in the third round after dropping the first two frames.

The first two minutes of the bout were waged on the feet, and while Held was competitive with his foe, with three minutes remaining, he decided to take the fight into his backyard on the mat. There, Held wasn’t able to finish his opponent, but he did dominate, and he got the fight to the ground immediately in the second round, looking to continue his good fortune. In the second minute, he nearly locked up a rear naked choke as the two rose, but Hadzovic escaped and landed some good shots at close range before being taken down again. Held again controlled the ground action, leaving Hadzovic in a deep hole entering the final round, but seconds into the third frame, Held dropped to grab his opponent’s leg and Hadzovic timed a left knee to the head perfectly, knocking Held out and prompting the immediate stoppage by referee Bobby Rehman just seven seconds into round three.