The preliminary card for Saturday’s 25th Anniversary event in Denver, Colorado featured six fights contested at 155-pounds or lower and provided an opportunity to get a closer look at a couple Contender Series winners, an intriguing lightweight and one half of “The Fighting de la Rosas,” the UFC’s first husband and wife tandem to compete in the Octagon.

Here’s a look at what transpired on UFC FIGHT PASS and FOX Sports 1 before the action shifted to the main card.

Strawweight competitors still trying to establish their footing in the UFC clashed in this evening’s final preliminary card contest, both looking to rebound from a loss to standout grappler and emerging prospect Mackenzie Dern.

Yoder dropped a split decision to the former Brazilian jiu-jitsu world champion in March, while Cooper was tapped out by the unbeaten Dern two months later at UFC 221 in Rio de Janeiro. Sporting a combined 1-5 record in the Octagon heading into this one, something had to give.

Strawweight competitors still trying to establish their footing in the UFC clashed in this evening’s final preliminary card contest, both looking to rebound from a loss to standout grappler and emerging prospect Mackenzie Dern.

Yoder dropped a split decision to the former Brazilian jiu-jitsu world champion in March, while Cooper was tapped out by the unbeaten Dern two months later at UFC 221 in Rio de Janeiro. Sporting a combined 1-5 record in the Octagon heading into this one, something had to give.

The first round was a tale of two halves — the first contested on the feet and the second spent on the canvas. In both instances, Cooper was the aggressor, initiating the striking exchanges and taking the fight to the ground, but in each phase, Yoder responded well, countering on the feet and reversing on the ground to finish in top position.

In the second, Cooper again played the aggressor, but it was Yoder who found success early, cracking home a powerful straight left before hitting a head-and-arm throw midway through the round. The gritty Cooper had an answer though, off-balancing Yoder and putting her on the canvas again, spending the final 90 seconds working from top position.

The final round started just like the first two with Cooper coming forward, stringing together punch combinations before driving through a takedown attempt two minutes in. Yoder used her momentum to roll through into top position and worked diligently to keep Cooper on the ground, but a failed kneebar attempt created an opportunity for Cooper to scramble free.

Cooper dove back in and Yoder finished attacking a neck crank, making the close scrap even closer as it went to the scorecards.

When the nines and tens were tallied, it was Yoder who snapped her three-fight skid, landing on the happy side of the split decision verdict.

Another member of the group of new arrivals to the UFC from this summer’s Contender Series, Moffett aimed to immediately establish himself as someone to pay attention to in the featherweight division. Riding a three-fight winning streak that included back-to-back first-round submission wins, “The Wolfman” looked to extend his run of success by knocking off a known commodity in the division right out of the gate.

Fighting for the first time in well over a year and making is 10th appearance in the Octagon, Skelly stood as a stern test for the MMA Lab newcomer. A perennial tough out and fringe Top 15 fighter, “The Scrapper” carried a 17-3 record into this one, eager to get back in the win column and avoid the first two-fight slide of his career. 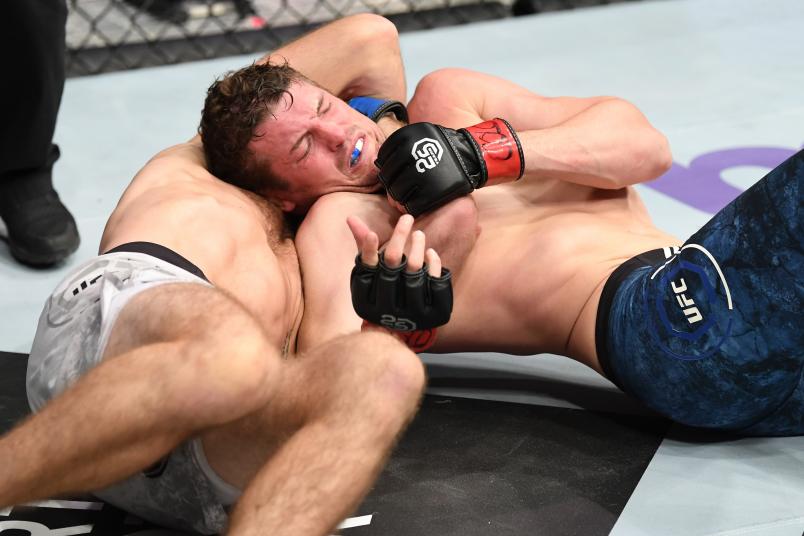 Early in the first, Skelly initiated a scramble that allowed him to work around to Moffett’s back, where he used the cage to help him climb up into a backpack position, where he would spend the majority of the round. While he was unable to find a choke, the veteran landed a number of solid punches and controlled the action throughout.

A minute into the second, Moffett took the fight to the floor, scooping Skelly in the air and dumping him to the ground. Skelly immediately looked to reverse the position, again using the cage to walk through a reversal and land on top, only to have Moffett attack with a deep D’Arce choke.

Skelly tried to wriggle free, circling on the canvas, with Moffett clamping down on the choke. Referee Tim Mills checked the arm and stopped the fight, believing Skelly was unconscious, however the Texan immediately objected, leading to a lengthy review of the footage at ringside, while Skelly gave his account of the situation to analyst Paul Felder and Moffett’s corners in the cage.

After checking the replay, Mills stuck by his initial decision, leading to an even more memorable debut victory for “The Wolfman” on Saturday night. 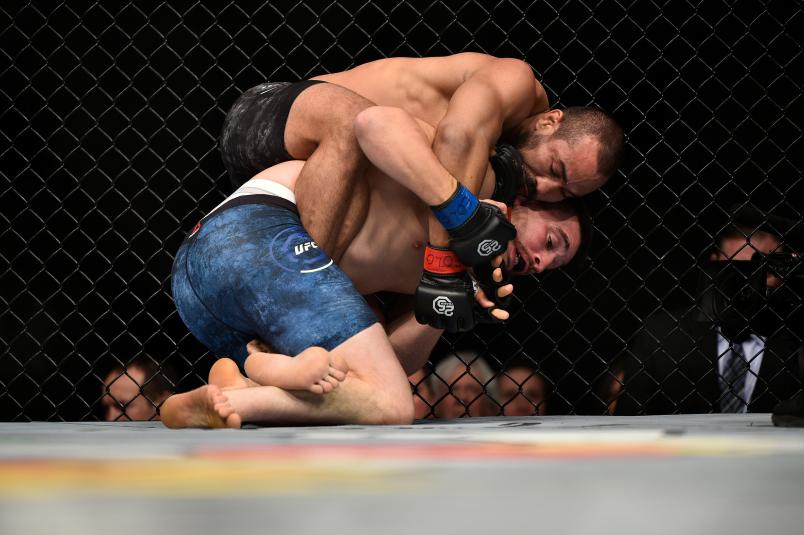 A former ADCC champion, Ramos made his UFC debut on short notice, fighting up in weight against fellow Brazilian Sergio Moraes. Upon returning to lightweight, “The Tasmanian Devil” earned consecutive submission wins over Chris Gruetzemacher and Nick Hein and looked to build off those results as he welcomed Gunther to the Octagon for the very first time.

The unbeaten Gunther was a member of Team Miocic on Season 27 of The Ultimate Fighter, selected in the fourth-round by his fellow Strong Style Fight Team representative. After losing in the opening round, Gunther replaced the injured Luis Pena in the semifinals, but lost to eventual winner Mike Trizano before garnering a majority decision victory over Allan Zuniga on the finale.

Ten seconds in, Ramos had Gunther on the canvas and passed to side control before quickly floating around to take the back. From there, it was academic as Ramos slowly worked his forearm under Gunther’s chin and squeezed out the tap to collect his third straight stoppage win.

Another graduate of this summer’s Contender Series, Smith rebounded from his lone career loss (which came against Gunther, incidentally) with four straight stoppage victories, including a 90-second knockout win over UFC vet Justin Edwards.

Saturday evening, he squared off with Erosa, a cast member on Season 22 of The Ultimate Fighter who went 1-1 in his first stint with the UFC before extending his winning streak to three with an impressive second-round win in his Contender Series appearance at the end of June.

While he wasn’t awarded a contract at the time, “Juicy J” got the call back to the Octagon nonetheless and aimed to start his second run with the company off on the right foot.

But Smith wasn’t having any of it.

Right out of the chute, the newcomer’s reach and speed advantages were clear. As Erosa dipped his head and threw out a lazy low kick, Smith connected first with a flush one-two that put Erosa on the canvas. The follow-up blows came quickly and referee Tim Mills jumped in to wave it off, bringing Smith’s Octagon debut to a halt just 46 seconds after it started.

Returning for the first time since suffering the first loss of his career, Team Alpha Male’s Morales hoped to restart his winning ways in this clash with the dangerous, but struggling Shelton, who had lost three of his previous four appearances in the UFC cage, all by decision and all against tough, talented flyweight foes.

Showing greater diversity in his offensive attack, Shelton used well-timed takedowns to keep Morales guessing through the first two rounds, putting him on the canvas multiple times. While the Californian dove on a guillotine choke a couple of times, he was never able to find the right angle and secure the grip needed to get Shelton out of there.

In the third, it was Morales who initiated the wrestling, once again threatening with the guillotine, but midway through the frame, it was Shelton who made a strong adjustment in a scramble to finish a takedown that he used to maintain control and keep Morales grounded for the remainder of the round.

This was a typical fast-paced flyweight scrap and a strong all-around performance from Shelton to earn the victory.

Saturday’s 25th Anniversary event got underway in the bantamweight division, with Sanchez stepping up on short notice to replace Jordan Espinosa in a clash with de la Rosa.

Married to flyweight hopeful Montana de la Rosa, the 24-year-old “Bumblebee” picked up his first UFC victory during the summer, securing a second-round rear-naked choke win over Elias Garcia two weeks after his spouse registered a third-round finish with the same technique against Rachel Ostovich.

After a pair of victories last summer on the Contender Series earned Sanchez a second opportunity to compete on the big stage, the 27-year-old Jackson-Wink representative was promptly submitted by Roberto Sanchez in February, dropping him to 1-3 inside the Octagon and prompting him to jump at the opportunity to replace Espinosa opposite de la Rosa on Saturday in Denver.

While Sanchez found success with the jab throughout and did an excellent job of fending off takedown attempts, de la Rosa’s relentless pressure, varied attacks and overall tenacity ruled the day.

Training with Marc Montoya and the Factory X squad for this contest, de la Rosa did a good job of listening to his corner, working the low calf kicks and combinations in tight as instructed. It was an entertaining scrap to start the night and Sanchez deserves credit for the effort he turned in on short notice, but at the end of the day, it was de la Rosa who got the nod and his second straight UFC win.