Smith: From Base Camp to Training Camp

“I’m a front line soldier and out there it’s life and death situations, but in the cage it’s not life and death. In the cage, the worst case scenario is I wake up single-legging Herb Dean.” – Colton Smith 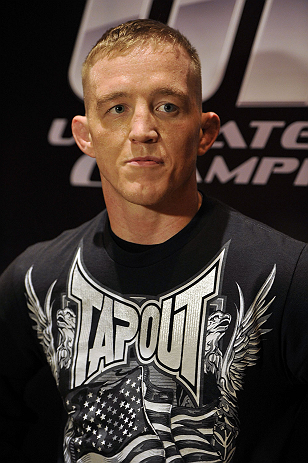 When The Ultimate Fighter 16 winner Colton Smith welcomes UFC newcomer Carlos Diego Ferreira at UFC Fight Night: Swanson vs. Stephens in San Antonio on June 28, in a way he will also be making his own UFC debut.

“I’m still active duty, but the Army has given me an opportunity to have a full fight camp, so I’m excited about that,” says Smith, a full-time soldier and Army Combatives trainer who left camp for just three days to see his four-year-old son graduate from Pre-K. “This is my first real training camp in Albuquerque, New Mexico, training with Greg Jackson. I never really had a game plan going into a fight and working on a game plan under Mike Winkeljohn, Brandon Gibson and Greg Jackson has been a real eye opener.”

Smith will need a good game plan if he wants to get back in the W column after back-to-back losses against TUF winners Robert Whittaker and Michael Chiesa. Ferreira is the former Legacy Fighting Championships lightweight champion who is also undefeated in nine fights.

“He’s a good grappler and doesn’t mind striking,” Smith said. “He’s an all-around good fighter, and there’s a reason why he’s in the UFC. I know Carlos, we’ve met a few times and we’ve grappled a few times. I’m excited about this fight. As soon as I was asked I obviously said yes. I am not in the business of picking fights. I know what he’s good at and I know what he isn’t good at, so I’m going to exploit those things.”

Smith says that for most of his career he’s been relying on natural ability and the experience he’s picked up in Army Combatives training and as a Greco-Roman and Freestyle wrestling champion in Iowa. Training with Team Jackson has changed the way he looks at mixed martial arts.

“It’s pretty amazing to see him break me down as a fighter,” he said. “I never had a game plan in any of my previous fights; I’ve always just gone out there and fought. So it’s wild the things he sees that other fighters or other coaches don’t see, either in me or in my opponent.”

Smith began his MMA journey after taking a fight on seven days’ notice after returning from a deployment in Iraq. He won the bout via first round TKO, and despite being employed full-time in the Army, he decided he would budget his time and go after a professional fighting career.

“The Army puts food on my table, so maybe I would do some cardio before fights, that’s about it,” he says. “I could only train two nights a week, from five to seven at night. That’s all I had time for. I thought ‘it’s getting hard to continue this pace.’ The biggest turning point was when I got a chance to talk to some high-up officials, and they shared my sentiment that I need to train at the top level to fight at the top level. I’ve never done that up until now. It’s a flaw on my part, I guess. I should have gone to them earlier and maybe I wouldn’t have some of those losses on my record, but it’s a lesson learned. I’ve always gotten by with natural ability, but it’s time now to buckle down so I can keep my place in the UFC.”

He says his experience in war gives him a more relaxed perspective about fighting.

“I’m a front line soldier, Army Ranger qualified,” he said. “And out there it’s life and death situations, but in the cage it’s not life and death. In the cage, the worst case scenario is I wake up single-legging Herb Dean. That’s the reality of it. That’s the way I go into my fights. The only difference this time is I’m going to have a game plan. If anything, I’m too calm when I go into my fights. I know they can’t kill me in there. Worst case scenario when I’m overseas is I don’t come home to my family.”

For Smith, UFC middleweight Tim Kennedy is a mentor, both inside and outside of training.

“He’s a little wiser and more established in life and it’s great to have a guy like Tim Kennedy around, says Smith. “Seeing guys like Tim and Brian Stann be successful fighters while still being active has been great. I’ve become more of a seamless mixed martial arts fighter, which was what my goal was coming to Jacksons, and I can’t tell you how much it’s changed my whole outlook on MMA.”

That outlook will be put to the test June 28.

“A win gets me on track. I know where I belong, I have trained with some of the best in the UFC, trained with them, sparred with them, rolled with them, competed against them, and I know where I belong and my training partners realize where I belong too. I haven’t shown that yet. My last two fights I was winning both of them and I ended up losing both of them. But now I really believe I’m coming into my own as a fighter and I’ll prove that on June 28th. There’s a lot of naysayers out there, but I will take it just one fight at a time and try to move up the lightweight ladder.”