Known for his work ethic and punishing daily training routine, Tony Ferguson isn’t switching things up too much in preparation for his UFC 216 main event against Kevin Lee, but he is adding an odd twist.

“The theme for this camp is ‘Smile Tony,’” laughs the man challenging for the interim UFC lightweight title at T-Mobile Arena on Oct. 7. “Because when I smile in my fights, you have the fights like Edson Barboza and Josh Thomson.”

Those aforementioned 2015 bouts, part of Ferguson’s current nine-fight winning streak, didn’t just earn him victories, but three combined bonuses. The moral of the story? If “El Cucuy” is smiling, it’s good for the fans and bad for his opponents.

Then again, the 33-year-old former Ultimate Fighter winner has been bad for his opponents’ business for a long time now. And while he’s taken the long road to the top, that patience served him well when hit with another speed bump in March, as Khabib Nurmagomedov had to pull out of their interim title fight due to complications with his weight cut.

“It definitely had a part to play in getting over UFC 209 and Khabib Nurmagomedov,” said Ferguson, who has yet to add “The Eagle” to his Christmas card list. “It was one of those things where I had so much time invested into this and he goes and he messes it up by not making weight and being unprofessional. How silly can you be? I guess it wasn’t that important to him. It’s sad. We’re professionals and we’re here to do one thing, and that’s get inside that Octagon, and that’s it. If that’s too much for you, then you’re in the wrong damn sport.”

Ferguson has no shortage of opinions on Nurmagomedov, and it’s likely that in the lead up to UFC 216, he will be asked about the unbeaten contender and the man with the lightweight crown, Conor McGregor. So it’s got to be hard to hear all that, knowing that Lee is waiting to punch him in the face in October. But Ferguson has come up with a solution.

“I keep my eye on four opponents,” he said. “That’s who I’m training for. So if there’s any kind of switch or any kind of anything, I’ll be ready for it. It doesn’t matter.” 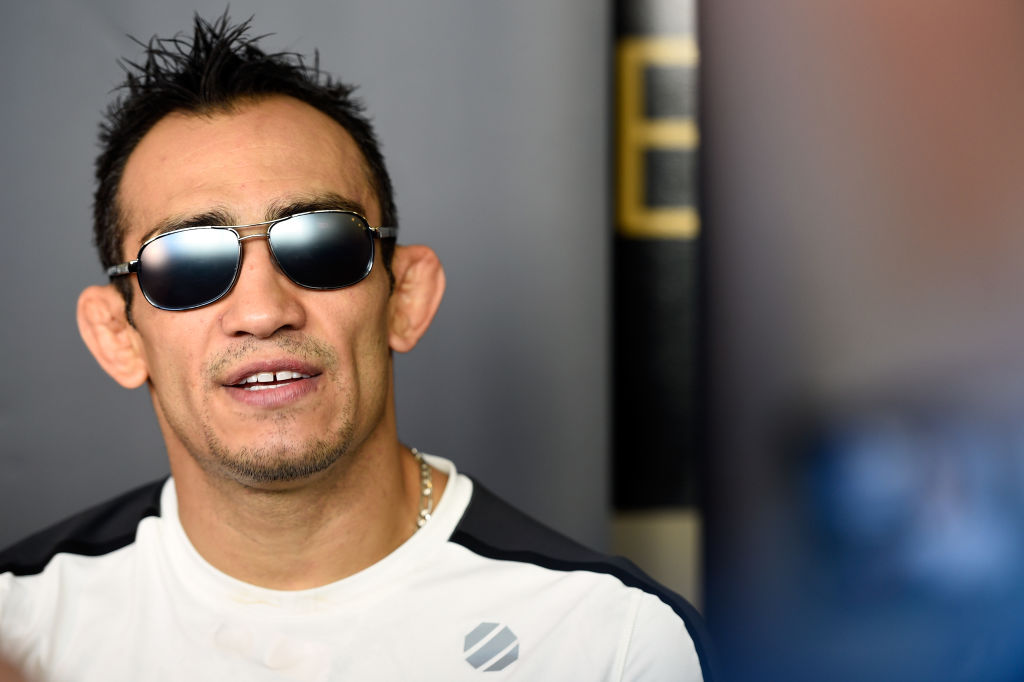 “There’s three guys and then there’s myself,” Ferguson explains. “The one person that’s gonna beat me out of this whole entire thing is myself. I’ve said that the whole way to get here and I said that I was going to beat everybody’s ass on the way here. I don’t want anybody to call me a liar, so it’s very important that my skill set is there so it doesn’t matter if it’s Lee, McGregor or Nurmagomedov. Once I hit somebody with my jab, it starts tasting like battery acid and they don’t want anything to do with me anymore, and they start running away from me like Katsunori Kikuno. Luckily, for me, I was a D-back (in football), so I can catch you. I just don’t see any of these guys posing a threat to me, especially when I’m allowing myself to be coached again.”

Ferguson, who has run his show in camp for a while, is now in the Blackhouse Gym in Southern California, and he’s enjoying being coached and being part of a team again. And though it’s another change in his professional life in the lead-up to a big fight, some guys just love being in the eye of the hurricane.

“I thrive in chaos,” he said. “And you can learn how to control the chaos factor and hone it in and channel it through positive energy the way I have been doing my entire life. You can embrace it or fall off, and I’m not falling off one bit.”

“I said I was gonna bring the knives out for this guy and I’m going to,” Ferguson said. “I think he’s a good athlete, he still has some learning to do, and I was 24 once myself. But this dude needs to be humbled.”
Save