One phone call to Sam Alvey and you realize that the whole “Smile’N” Sam thing is no act, as the theme from “The Muppet Movie” plays while you wait for the middleweight up-and-comer to pick up.

“My wife and I both have it,” he explains. “Every time we call each other, we smile, whether we’re mad at each other or not.”

That smile was tested over the last 10 months. First Alvey lost his first fight since 2014 to Derek Brunson in August, getting knocked out for the first time in the process. Then he broke his jaw in training in December, keeping him sidelined even longer.

“My smile was surgically enhanced,” he laughs. “Every time I said a word, I was smiling. I may not have been smiling on the inside, but on the outside I sure was.”

Now it’s real, though, as he prepares to return to the Octagon this Saturday in the UFC FIGHT PASS featured bout against Elias Theodorou in Ottawa. It’s a fight Alvey has wanted for a long time, and he’s getting what he wished for.

“He’s got one of the coolest and most fun personalities in all of MMA and that’s one of the reasons I called him out a year ago,” he said. “I saw his fight style, I saw his fight personality and I wanted to be part of that. But he’s been scared. He said ‘No’ to my face, he said ‘No’ respectfully, he said it’s not a fight he’s interested in. But he can’t say ‘No’ anymore and that’s a big advantage for me.”

If Alvey appears to be more amped up than usual, that’s accurate and understandable. In this business, you get paid to fight, and being out for almost a year can make it a trying time, especially when Alvey and his wife McKey are expecting their third child shortly. But that’s the practical side. The competitive side of Alvey has been tortured by the wait, especially when he was unable to do anything but lift weights while his jaw was wired shut. 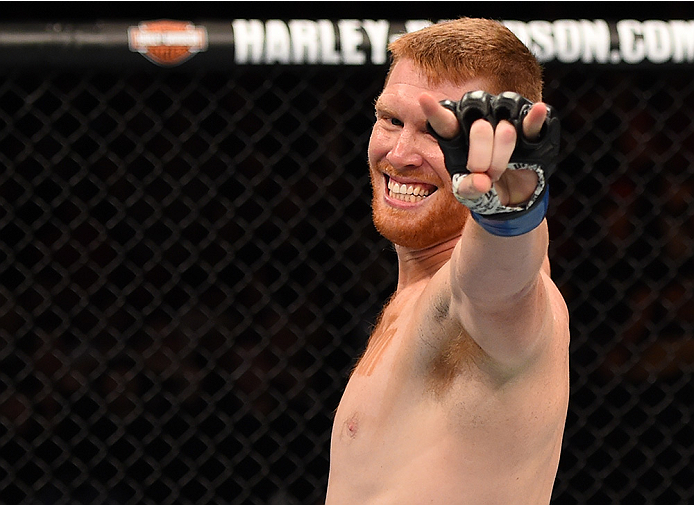 “I never really took time off,” he said. “I had to change what I did with my time. I’ve always enjoyed lifting. I could no longer run or wrestle or do (jiu jitsu) or punch, so I lifted a lot and I got stronger than I’ve ever been in my career. That’s not bragging. I had six weeks with my mouth wired shut and I could do nothing but lift and walk.”

Once cleared, Alvey attacked the gym with a vengeance, and if getting back to the Octagon wasn’t motivating enough, earlier this month he saw his mentor Dan Henderson score a huge knockout win over Hector Lombard at UFC 199.

“He (Henderson) is 45 years old and he’s been competing for 44 of those years (Laughs), and he can still beat the best in the world,” Alvey said. “Dan has put in so much time and he helps us guys so much, it’s cool to see him walk away with such a big win.”

It’s Alvey’s turn now, following a disappointing first round stoppage at the hands of Brunson.

“It sucks,” he said. “It was an early stoppage. I could have gone more. I’m known to be a guy that gets beat up a little and comes back in spectacular fashion. That being said, I got my butt kicked for two minutes before they stopped it early. But Brunson was phenomenal. He was supposed to wrestle me, and he punched me in the face. I sat on my heels and dared him to punch me. He took that dare and he ran with it. That was my bad, and it’s a mistake I won’t make twice.”

And if the expected road to victory for Theodorou involves a ground battle, Alvey isn’t necessarily buying it.

“I try not to hear that so much,” he said. “Derek Brunson, all he was gonna do was take me to the ground, and he didn’t do it. He caught me. I worked with nothing but wrestlers for eight weeks. I worked my standup too, but it was the wrestling I was concerned with because Brunson is a good, strong wrestler. I train with good wrestlers – Jesse Taylor, Sean Strickland, Dan Henderson is an Olympian - and these guys can’t hold me down. I’m not gonna lie – they can get me down every now and then, but nobody’s gonna hold me down for 15 minutes. Nobody can. It’s not gonna happen. He’s not gonna hold me down and he’s not gonna beat me that way. He will not beat me.”

Has the smile finally gone from the face of Sam Alvey? For three rounds or less on Saturday night, it just might.

“I’ll shake his hand and buy him a beer afterwards, but for 15 minutes, it’s gonna be as close to Angry Sam as I get.”