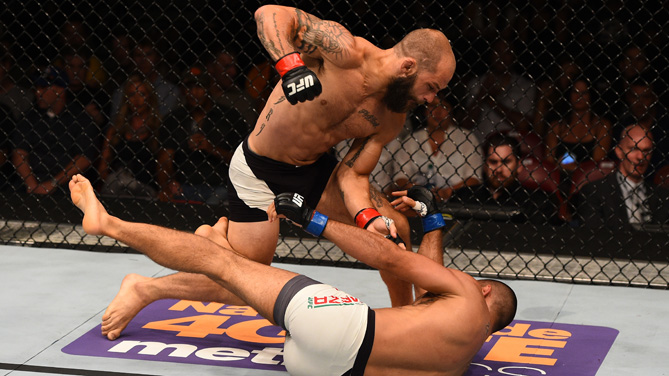 Featherweight knockout artist Sam Sicilia showed off his ground game in prelim action at the Valley View Casino Center in San Diego on Wednesday, using his grappling attack to win a unanimous decision over Yaotzin Meza.

“I had something to prove," Sicilia said. "I just want to string some wins together.  I hate to admit it, but that’s my first two-fight win streak in the UFC.  I wanted to knock him out, but I got caught up in the submission game because that’s what I’ve been working on.  I wanted to prove that I have a ground game. “

After there were no openings for his bombs in the opening stages of the bout, Sicilia locked up with Meza and took the bout to the mat. The two proceeded to scramble back and forth for a spell before Sicilia settled in the top position and then tried to take his foe’s back. With a little over a minute left, Sicilia gave up position and the two traded guillotine chokes, wrapping up an unexpected five minutes of ground fighting.

Neither fighter was able to impose his will while standing in the first half of round two, so it was back to the mat for a bit, Sicilia on top until they stood again. Meza did get the last word, scoring a takedown just before the horn.

Sicilia kept the grappling pressure on in the third, nearly catching Meza in a guillotine choke, but the veteran, who showed solid defense throughout, survived again. It was Meza’s offense that was lacking until the final minute, when he tried to lock up Sicilia with a guillotine and an armbar. But it was too little, too late. 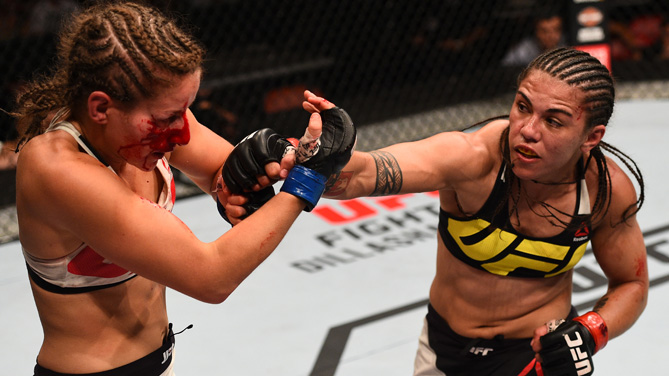 Canada’s Sarah Moras almost pulled off a miracle comeback against Brazilian bantamweight contender Jessica Andrade, but it was not to be, as Andrade survived the late surge and won a dominant three-round unanimous decision.

Moras looked for the takedown as the fight commenced, but it was Andrade who scored the first trip to the mat as she threw the Canadian down. The two rose quickly and went back to work on the feet, with both fighters getting in some shots during solid exchanges. Midway through the round, the bout went to the ground, Moras working for submissions from her back. After some dicey moments, Andrade stood and decided to test her luck standing. When the bout returned to the mat, Andrade fired off several hard shots on her downed opponent, finishing the round strong.

Andrade threw Moras to the mat early in round two, and the ground-and-pound attack continued. Midway through the stanza, Moras rose, only to get slammed right back to the canvas, where the raining down of hammerfists resumed until the horn.

There was no let up to Andrade’s punishing attack in the final round, and the gutsy and bloodied Moras kept hanging in there, but she was simply being overpowered by the Brazilian. Yet shockingly, in the final minute, Moras nearly sunk in a rear naked choke, with Andrade in trouble, but able to hold on to fight’s end. 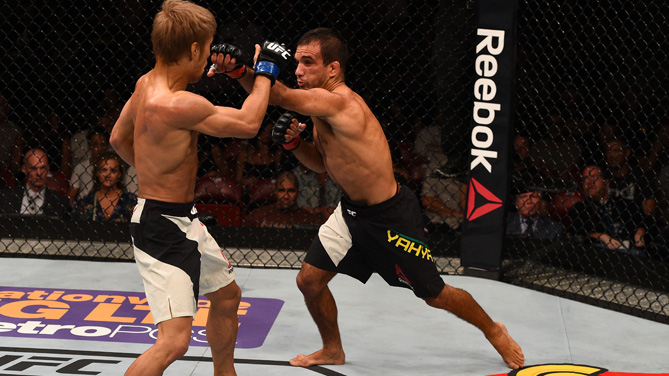 Brazilian veteran Rani Yahya had to battle both fatigue and Masanori Kanehara in the late stages of their bantamweight bout, but he still survived a late surge from his opponent to emerge victorious via split decision.

Faking a flying knee, Yahya (21-8, 1 NC) went right into a takedown and he pinned Kanehara to the fence as the bout began. By the midway point of the round, Kanehara was back on his feet, but only momentarily, as Yahya took him down a second time. Even when they rose, Yahya stayed locked on, but on the third trip to the mat, Kanehara reversed position and got to his feet. The bout went back to the canvas for the rest of the round though, Yahya in command.

Kanehara (25-12-5) had success staying upright in round two, and when the bout hit the mat, it was the Tokyo product in the top position. Yahya did try for a guillotine choke twice, but the round may have gone to the busier Kanehara.

The action wasn’t particularly compelling in the final round, but as fatigue crept in on Yahya, Kanehara was able to rally and keep the Brazilian at bay while putting his own offense in gear when he needed it the most. It wasn’t enough on two scorecards though, as Yahya pulled out the win via scores of 29-28 twice and 28-29.

“I thought I won the fight,” Kanehara said. “ I know it’s subjective.  No excuses, though.  It’s my fault.  I let it go to the judges.  I got better as the fight went on, but it just wasn’t enough, I guess.” 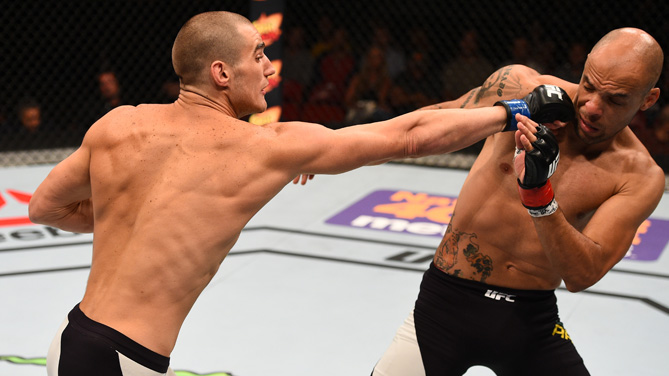 Strickland (16-1) had a dominant first round, both on the mat and on the feet, with referee John McCarthy looking to be on the verge of stopping the bout on a couple occasions. The gutsy Araujo found a way to stay in the fight though, swinging back wildly as the frame closed to buy himself a break and another round.

With Strickland choosing against an all-out blitz to start the second, Brasilia’s Araujo (25-8, 1 NC)was able to get himself back into the fight, but by the second half of the frame, the Californian had once again put his foe on the mat, where he used ground strikes to put another round in the bank.

Nothing changed in the final round, with Araujo trying to turn things around but Strickland not willing to let him, as he countered his opponent’s wild strikes throughout. 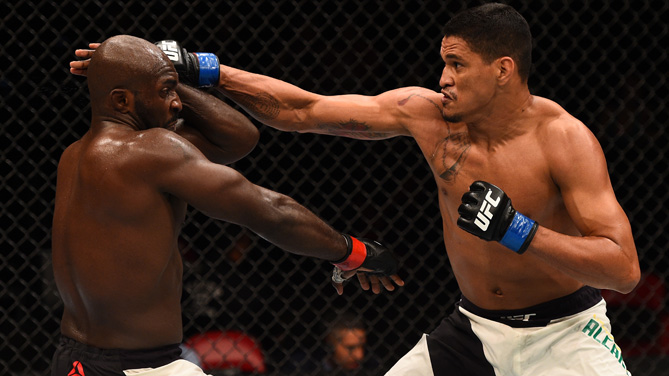 “I haven’t fought in almost a year and I fought a tough opponent tonight with a lot of ring experience,” Casey said. “He ran a lot, but I just tried to dictate the pace of the fight as much as possible and keep moving forward.  My team really did a great job preparing me for this fight.”

After running into some trouble after a failed takedown led into Alcantara taking the mount position, Casey got loose and wound up controlling the rest of the opening round on the mat.

Alcantara led most of the way in round two, with the fight settling into a stand-up groove more favorable to the Brazilian. Late in the frame though, a Casey left hand hurt and dropped Alcantara, leaving “Marajo” in trouble on the scorecards heading into the third.

Neither fighter showed any sense of urgency in the last round, but again, it was Casey scoring when it mattered, as a late takedown likely sealed the round and the fight for him. 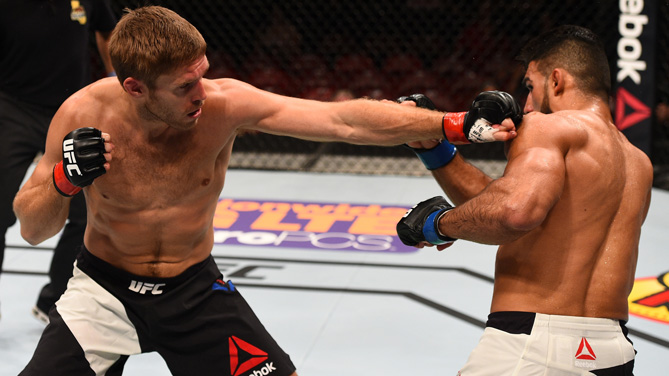 Veteran standout Lyman Good got his long-awaited UFC debut in the welterweight opener and he made the most of it, stopping Andrew Craig in the second round.

Both 170-pounders fought at a busy clip in the opening round, keeping it standing the entire time. Good held the edge as he mixed things up nicely with a stiff jab and thudding kicks to the leg of the Texan, as well as a head kick that knocked Craig off balance late in the frame.

Craig had success at close range in round two, as he landed short elbows to the head and knees to the body, but with under two minutes left, Good landed a crushing right hand that put Craig on the mat. The New Yorker moved in for the finish, and after a series of unanswered blows, he got it, with referee Jason Herzog stepping in at the 3:37 mark.

With the win, Good improves to 19-3 with 1 NC; Craig, who was making his welterweight debut and his first Octagon start since June of 2014, falls to 9-4.