"I’m excited about that card and of course I’m so excited about GSP-Hendricks. Top to bottom I think it’s stacked." - Skylar Astin 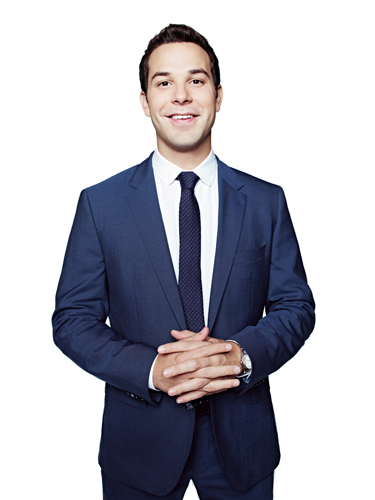 A diehard’s diehard when it comes to mixed martial arts, Skylar Astin may be kicking off his new TBS comedy series Ground Floor on Thursday, but on Saturday night, he’s already got plans.

“I’m really looking to the card on Saturday,” said Astin of this weekend’s UFC 167 event in Las Vegas. “I think that the sleeper main event is the co-main event with Rashad (Evans) and Chael (Sonnen). I actually had the good fortune of hanging out with both of them at UFC on FOX 4 when they were working with Jay Glazer on the pre-show, and I did a FOX crossover thing with them. So it’s so weird to me that they’re fighting now. I’ve since texted Rashad and talked to him about it and it’s just weird, but that’s the business. I think it’s admirable that these two veterans are going at it and putting their friendship aside just to compete. It speaks volumes about what the sport’s become. It’s not a sideshow; it’s the main attraction. So I’m excited about that card and of course I’m so excited about GSP-Hendricks. Top to bottom I think it’s stacked.”

You can hear the enthusiasm in the 26-year-old actor’s voice when he talks about the UFC, and he can reel off fights and fighters left and right, which is made even more impressive by the fact that he didn’t even start watching the sport until 2011.

“My brother Milan got me into it,” said Astin. “I was watching Chris Leben fighting Brian Stann (at UFC 125). I grew up watching the WWE, I was a huge fan, and I always wanted it to be real but I always knew in the back of my head that it wasn’t. So when I was seeing this All-American hero, Brian Stann, fighting this crazy “Crippler,” Chris Leben, it just brought me back to those days. And once my brother started explaining the disciplines to me, now I know them very well and I can almost commentate a fight with (Joe) Rogan. But at the time, I was hooked. (UFC President) Dana (White) always says fighting is in DNA, and as long as it’s regulated and it’s not some street fight on the corner and it’s in an Octagon and you’ve got someone like Herb Dean or Big John McCarthy making sure that these fighters are safe, I’m watching it.”

And in Astin’s defense, maybe, just maybe he was a little too busy before to get into the sport. A stage actor who added television and movie roles to his resume, the New York native’s breakout role was as Jesse Swanson in the 2012 film Pitch Perfect. Focusing on the battle between college a capella groups, it was a film that the male portion of the UFC demographic probably didn’t line up to see, but once they did, they were almost certainly hooked.

“I can’t even tell you how many times I meet some dude who’s like ‘dude, I didn’t want to watch it, my girlfriend made me watch it, and now I’ve seen it more times than she has,’” laughs Astin. “I went to UFC 157, which was Ronda Rousey’s first fight. I was promoting another movie, and I was sitting cageside. I met Dana, and (UFC Chairman) Lorenzo (Fertitta) and I was taking pictures with Lorenzo’s daughter and Lorenzo’s wife, and Dana was telling me he heard of it. Then I met Anthony Pettis and Demetrious Johnson and they were asking to take pictures with me and it was so thrilling because I don’t get star struck by actors, but I get star struck by athletes, especially UFC fighters. So it was so crazy to see the flyweight champion of the world and now the lightweight champion of the world admiring something that I was capable of doing. It’s so cool that the manliest of men can like a movie that’s so unapologetically the way it is like Pitch Perfect.”

Add in the 2013 hit comedy 21 & Over, and Astin is definitely on the rising star list in Hollywood. But on Thursday, he moves from the silver screen to television for Ground Floor.

“This is so much more fast-paced and TV is so immediate,” he said of the move back to TV. “You don’t have to wait too long and hope that your one shot and that the production translates to the big screen. In this we churned ten of them (episodes) out in two months and I’m already done with season one. I loved it, I worked so hard, and it was like a training camp. (Laughs) I was in comedy training camp, and now we get to see what people think about it and I hope they’re entertained. We’re not reinventing the wheel with this show, but it’s a really funny sitcom and I think that people are going to enjoy just laughing at a bunch of funny people they get to watch when they’re winding down from their own work day.”

For Astin, Ground Floor isn’t just a payday though; it’s an opportunity to stretch out a bit, show off his comedy chops once again, and keep things interesting for himself artistically.

“Each area has its own challenges and it also has its own rewards,” he said when asked to compare stage, film, and TV acting. “I love being in front of  a live audience, and there’s nothing like a live show, but this time, instead of theater, which I’m used to, it’s recorded and we have four cameras going, and the relationship that I have to be responsible for is with the viewing audience at home, and the viewing audience on set. And it’s a wonderful balance that I enjoy playing with.”

Perhaps almost as much as he enjoys watching mixed martial arts. And while we could end it here, we’re not letting him off the hook without making a pick on Saturday’s main event between Georges St-Pierre and Johny Hendricks. The question produced a sigh and a long pause.

“You always find out who you want to win when you’re watching it, by the way,” said Astin with a laugh before giving his breakdown. “What I want to happen is I want GSP to finish someone. I just want to see it. What I think is gonna happen is GSP is going to win by split decision. But I’ve watched Johny on Primetime and he’s got this ‘I’m destined to do this, this is my destiny’ thing, and we’ve watched it happen with (Chris) Weidman, so I’m tuning in. I’m excited and there’s nothing that’s going to keep me from watching that event.”