Skelly shows he's got toughness to succeed in UFC 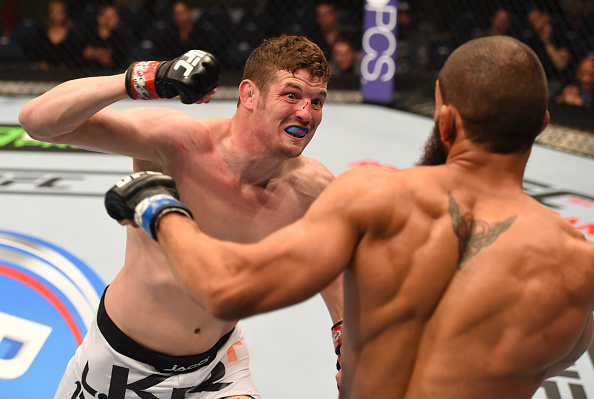 Featherweight up and comer Chas Skelly has always been a tough guy. Last November in Brazil, the rest of the world got the news.

Fighting in Sao Paulo against Kevin Souza was going to be tough enough as he battled a Brazilian in Brazil, and when the hard-hitting Souza – who was on a 10-fight winning streak - put the Texan on the deck and had him on the verge of being knocked out, the fight was going to get even tougher – or shorter.

Skelly opted for tougher, and he survived the round.

“I had never been knocked down, even in sparring,” Skelly said, and when the second round started, he was still not in shape to make a comeback. Yet as the two combatants went to the fence, it was all “The Scrapper” needed to get back in the fight. He took Souza down, took his back, and at 1:56 of Round 2, he submitted his foe via rear naked choke.

The win, Skelly’s fourth in a row, was perhaps the biggest of his career. At the very least, it showed that he had that extra gear every fighter says he or she has, but that not everyone does.

“When I go back and look at the film, I reacted pretty well right away after I got in trouble,” he said. “That was just me acting on instinct, I guess. I even took some more pretty good shots while I was hurt and still was fine, so that's something that's good to know about myself, that if I get hurt like that, I can still recover and come back and win a fight. It's definitely a positive.”

Not that you want too many of them on your resume.

“I've always been the type of person that likes to put on exciting fights for the fans, and I like to be out there and be in a good scrap, a good dogfight, but you don't want to take too many shots like that.”

Luckily, he hasn’t had to. Owner of a 15-1 pro MMA record, with his only loss coming by way of majority decision to Mirsad Bektic in his UFC debut in 2014, the 30-year-old Azle native has been quietly sneaking up the featherweight ladder. It’s a surprising way to go since Skelly puts on exciting fights, has finished three of his four UFC wins, and has a sense of humor that any fan could relate to.

“I don't know what it's gonna take for people to start looking at me as a serious contender and start getting a bigger following,” he said. “I guess if I had a microphone stuck to my face every day, then people would know how funny I am, but that's not always something I can control, so all I can do is go out there and keep winning fights and I think the more fights I win, the more exposure I'll get.”

He will get plenty this weekend as he opens up the UFC 196 prelims on FOX Sports 1 against number 11-ranked contender Darren Elkins. It’s almost a clash of mirror images, as both are hard-nosed wrestlers who don’t exactly have the rest of the division lining up to fight them.

“We have a lot of similarities,” Skelly said. “We're both pretty awkward, we're both ugly, and I think we're both hardworking, grimy-style guys. Our body types are also very similar, and both of us are very unorthodox in the things that we do. He's not an orthodox striker or grappler or wrestler, and I'm not an orthodox striker, wrestler or grappler at all. I'm actually very, very funky and unorthodox. But the things that set us apart though is that I look for finishes the whole time and I feel like he likes to grind out decisions. He wants to wear guys down and I want to get in and get out.”

Yet despite the similarities, Skelly admits that preparing for the veteran Elkins, who is 8-3 in the UFC since moving to 145 pounds, isn’t easy. Then again, getting ready for Skelly will be no cakewalk for Indiana’s Elkins.

“I think it's really hard to prepare for somebody like me unless you can go with somebody like me, and there is nobody out there that's too much like me,” Elkins said. “And it's kind of the same thing with him. So that does make it more difficult to prepare, but in a fight like this, it's who imposes their will, so it's important for me to just concentrate on doing what I do best, and I think that will work out for me.”

If it does, expect to hear a lot more from Skelly in 2016, especially since he’s kicking the year off on a major card in Las Vegas for the first time. Is the “Fight Capital of the World” ready for The Scrapper?

“They have no choice now.”