Skelly plans to give people what they want in Dallas 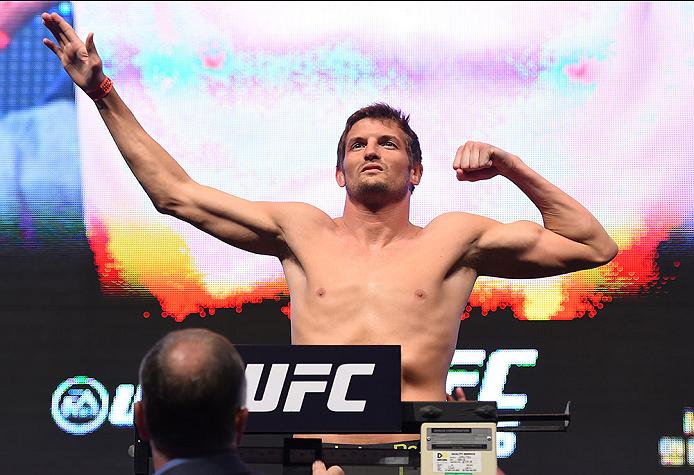 The featherweight division stepped into the spotlight in mid-July 2014 when Conor McGregor made his triumphant return to the Octagon at home in Dublin, drubbing Diego Brandao to send the crowd into hysterics and truly kick off his march towards the top of the division.

Since then, the 145-pound ranks have remained front and center, bolstered by McGregor’s yearlong pursuit and eventual vanquishing of Jose Aldo and last year’s questions about whether the Irish standout would return to the weight class. During this time, prospects have established themselves, veterans have solidified their position in the pecking order and Max Holloway has just kept on winning.

Despite all the attention that the featherweight division has been afforded, guys like Chas Skelly have still managed to fly under the radar.

The Fort Worth, Texas native arrived in the Octagon a couple months ahead of McGregor’s return to Ireland and has amassed a 6-1 record since dropping his debut by majority decision to hot prospect Mirsad Bektic. His only hiccup since then came opposite Darren Elkins at UFC 196, which turned out to be his last fight before connecting with coach Henri Hooft and the newly assembled crew working out of the Combat Club in South Florida.
RELATED: Skelly matchup with Jason Knight | Skelly talks backstage after win over Maximo Blanco

In his two efforts following that contest, Skelly has continued to show that he has the potential to be a player in the featherweight division, choking out Maximo Blanco in 19 seconds before tapping Chris Gruetzemacher in the second round five months later to complete a nice little Texas two-step.

“I’m getting a little older – I’m 31 – so taking care of your body is definitely a high priority now, making sure that I’m healthy and going into the fight without too many bumps and bruises.”

After previously maintaining a “get me back in there as quickly as possible” approach to his career that included a pair of victories 13 days apart following his initial appearance in the Octagon, Skelly has dialed things back in recent years.

Though he still wants to cross the threshold into the UFC cage on a regular basis, the scrappy featherweight has come to recognize the importance of logging quality hours in the gym between appearances, as well as the benefits of being surrounded by elite training partners.

“Having time in between fights to actually improve has been a huge factor,” he said. “Another thing is the fact that I have really good training partners now. 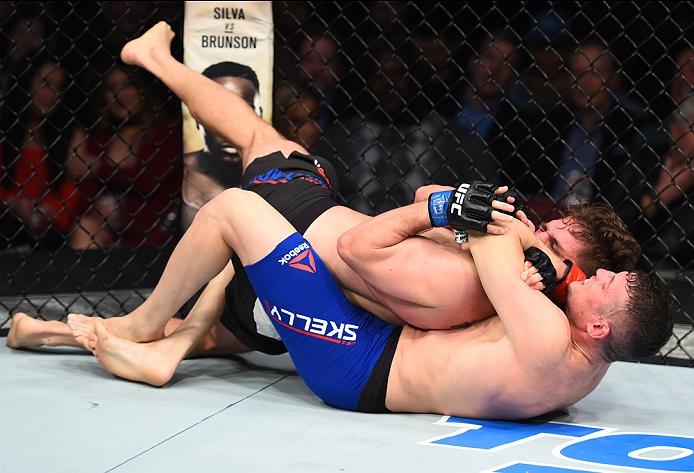 While the depth in the division has kept Skelly from cracking the Top 15 despite consecutive finishes and a strong overall resume, the 31-year-old former NAIA All-American has a chance to break through later this month when he squares off with fan favorite Jason Knight as part of the loaded preliminary card at UFC 211 in Dallas.

In just a handful of fights, Knight has established himself as one to watch in the loaded weight class, as he’s rattled off a trio of victories highlighted by high-volume striking, slick grappling and a penchant for talking trash and taunting his opponents. It’s a mix that has earned him the unofficial moniker “Mississippi Diaz,” as the Alan Belcher protégé could very well be a distant cousin of Stockton’s favorite sons.

Fired up to share the cage with the fiery Knight, Skelly welcomes the possibility of getting into a knock down, drag out fistfight in front of friends and family on May 13 at American Airlines Arena in “Big D,” even if his highlight reel is loaded with clips of him taking guys down and outworking them on the ground.

“I’ve just always felt that I was better at grappling than the people I was fighting, so that’s why I did it, but I’ve always loved to stand up and throw punches,” he said of potentially getting sucked into a slobberknocker with Knight. “I enjoy fights like that. I don’t have a problem taking some damage and I don’t have a problem handing it out, that’s for sure. It’s something that I’ve never shied away from; it’s just that I’ve always felt I had a distinct advantage on the ground.

“Maybe this fight will be a good one to go out there and maybe throw down a little bit because he’s a very hittable guy.

“The goal is to always go out there and put on a show for the fans,” he added. “That’s what they want to see, so give the people what they want.”