At 35 years old, Siyar Bahadurzada has been there and done that in combat sports and in life. That experience and knowledge is priceless, and he expects that such gifts, along with his fists and feet, will lead him to victory over 23-year-old Ismail Naurdiev this Saturday in Copenhagen.

That doesn’t mean he’s forgotten what it means to be 23.

“When I was that age, I wouldn't even knock on the door, I would just walk through the walls,” Bahadurzada laughs. “That's the kind of mentality I had back then. When I was 23, I became the Shooto champ and I was knocking people out within a minute and then I got into the title fight in Japan and I literally beat up the champion (Shiko Yamashita). For three rounds I dominated him, I beat him up. That's how I fought when I was 23.”

Bahadurzada pauses, as we all do when we remember being that age.

He may be right. Of course there is something to be said for being young, aggressive and reckless, but with maturity comes the ability to use your brain as well as your brawn to get the victory. And Bahadurzada has gotten plenty of those over the years, including four in the UFC. Yet while going 3-1 in his last four is impressive, taking over three years to reach that mark has been frustrating for the Kabul native, who has been plagued by injuries.

“Injuries are never good to athletes,” Bahadurzada said. “But, on the good side, the sport is getting a lot of popularity and I'm not putting too much mileage on my body, which is good. So I can fight on. I'm 35 and I feel like I'm 25. Honestly, when I was 25, I didn't feel this way. Of course, the recovery is not as good as it was then, but there is more quality in the training and more Fight IQ because I've been in the game for 20 years now. I know this game inside out and I have the necessary experience. I'm experienced, polished, and to be polished and not have too much mileage on my body, I feel great.”

Bahadurzada also makes a point to give credit to his coaches Greg Jackson and Said El Badaoui, and though he wasn’t in Albuquerque for this camp, he has gotten plenty of good work in his adopted home country of the Netherlands.

“I moved to Holland for this fight because I needed to prepare differently and also because of the time zone,” he said. “I don't like jet lag and I don't want jet lag to affect my fighting, so I thought it was a good idea to move here. And it's also home here. When I'm in Holland I have all my friends here, I know all the coaches and trainers here, I have everything.”

MORE UFC Copenhagen: Jack vs Jared - The Crowd Will Explode | Fight by Fight Preview | Media Day Faceoffs | Inside the Octagon

It’s almost like Bahadurzada is going old school for this one, revisiting the place that made him not just as a fighter, but a man.

“If I have to compare Amsterdam with Kabul, Kabul is like a mother who gave birth to me,” he explains. “It's something you cannot deny. It's my identity. But when I came to Holland, I was 15, and I had horrible days in Afghanistan. I went through several wars, I've walked over dead bodies to make it home and survive, and all those negative memories, all those negative things that I went through in Afghanistan, they've built the kind of character that I have today, which I'm thankful for. I cannot ignore that; it's something that's in me. But when I came to Amsterdam, Amsterdam feels like that one BFF that you laugh with a lot, and that you do a lot of good things with on the way and you have fun with and do adventurous stuff with. Amsterdam has always been the city where I feel really, really comfortable. That doesn't mean I'm comfortable training-wise. I'm comfortable feeling-wise. And that's something very special that I have this kind of bond with Amsterdam.” 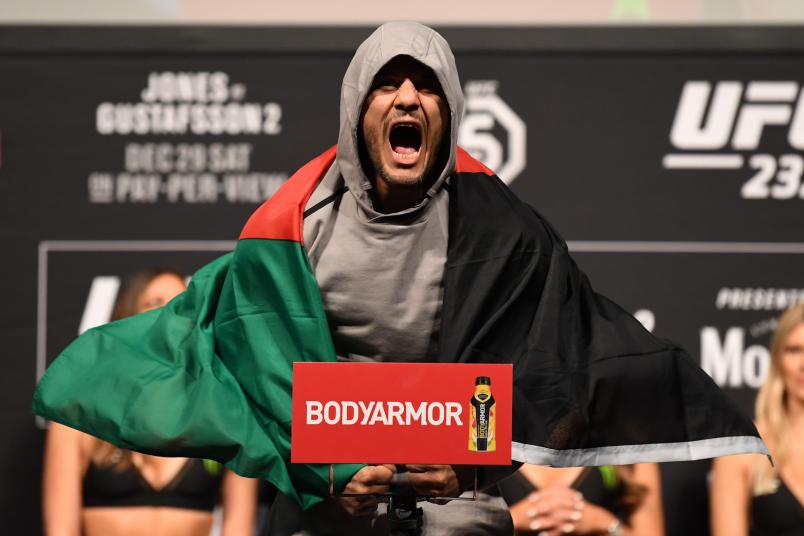 INGLEWOOD, CA - DECEMBER 28: Siyar Bahadurzada of Afghanistan poses on the scale during the UFC 232 weigh-in inside The Forum on December 28, 2018 in Inglewood, California. (Photo by Josh Hedges/Zuffa LLC/Zuffa LLC via Getty Images)

INGLEWOOD, CA - DECEMBER 28: Siyar Bahadurzada of Afghanistan poses on the scale during the UFC 232 weigh-in inside The Forum on December 28, 2018 in Inglewood, California. (Photo by Josh Hedges/Zuffa LLC/Zuffa LLC via Getty Images)

Bahadurzada never forgot his roots, though, and to this day, while wins and titles are nice, it’s not the be-all end-all behind what he’s doing every time he puts the gloves on.

“People who are rich, they give money to charity. I give my energy, I give my body, I give my soul, I give my everything to keep those people motivated and show them to fight for whatever they believe in because there's always another day and always a morning after a dark night.”

That’s a lot of responsibility, but Bahadurzada embraces it, because he knows he doesn’t have to put on one face for the media and another behind closed doors. This is who he is, and if you want any more proof, look inside the Octagon on fight night.

Bahadurzada never hides. He doesn’t run. And he believes that at 35, the best is yet to come.

“Age is just a number,” Bahadurzada said. “It's how you feel inside. The fire that you have inside of you, that determines your age. As long as that fire burns, age doesn't matter. It's all a matter of will and there's always a day when you come to shine. Every dog has its day, and I honestly believe that my day is coming. I don't care when it's coming, I just believe it's coming. And when my day comes, I will reign.”

UFC Copenhagen airs at a special time. The main card starts on ESPN+ at 2pm/11am ETPT and the prelims begin at 11am/8am ETPT.