"I like to always keep improving and trying new things, and putting on good performances. I think that is what keeps me motivated and wanting more." - Anderson Silva 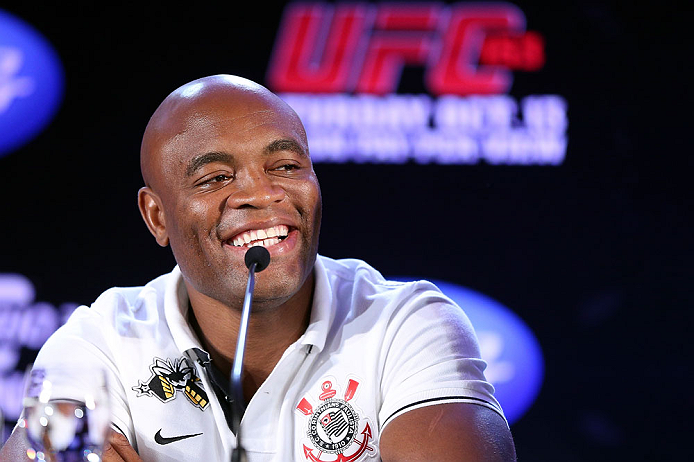 The oddsmakers may have counted Stephan Bonnar out of Saturday’s UFC 153 main event against Anderson Silva in Rio de Janeiro, Brazil, but one man hasn’t.

“There are always challenges at any weight, and a fight is always a fight, especially at 205 pounds,” said the longtime middleweight king, who will dip his toes into the light heavyweight pool for the third time as a UFC fighter when he meets Bonnar. “These guys are big and strong, and anything can happen at any time.”

Or as the old adage goes, “that’s why they fight the fights.” So for all the talk of this being a walk through for a man many consider to be the greatest mixed martial artist of all time, when the four ounce gloves are on and a 205-pound man is swinging them at your head, all it takes is one punch to turn a walk through into the biggest upset of all-time.

And that’s just with any fighter. With Bonnar, Silva will be facing a well-rounded tough guy whose only stoppage losses have been via cuts. He’s big, he’s strong, he’s got heart for days, and he can fight a bit too. Silva knows all about it.

“He is part of the history of the UFC, one of the guys responsible for helping our sport get to where he is at,” said the Brazilian superstar of Bonnar. “He is a very dangerous guy. He is good on his feet, he is good on the ground, he is a good wrestler, has great takedown defense, and he is a complete fighter all-around.”

If Silva sounds relaxed these days and ultra-complimentary of his opponent, consider a few factors: he’s fighting at home in Brazil, he doesn’t have to cut to 185 pounds, and he’s fighting someone not named Chael Sonnen. The last point may be the biggest, as what was a seemingly routine title defense back in 2010 against the self-proclaimed “Gangster from West Linn” turned into a bad blood rivalry that only was truly settled when Silva stopped Sonnen in their UFC 148 rematch in July. Is it nice now for Silva to deal with a respectful opponent and not have such an emotionally charged camp and fight?

“It’s an honor to fight a guy like Stephan Bonnar.”

That pretty much says it all. And with Sonnen out of the way, Silva has been free to enjoy the fruits of his labors in the time following the bout. A recent trip to New York City included a visit to the US Open and to Manhattan’s Nike store, and everywhere he went, people far from his country knew just who “The Spider” was, an example of how big he and the sport have gotten.

“It’s great to see where our sport has come and to get the support and the caring of all the fans from all over the world,” he said. “All of the fighters have worked hard to bring our sport to where it is today.”

Perhaps none more than Silva, who has been in the spotlight for much of the last six years, ever since he won the UFC middleweight title from Rich Franklin in October of 2006. Since that night, Silva’s profile has risen both in Brazil and internationally, while he has been the target of every fighter at 185 pounds (and sometimes 205) for longer than any other champion in organization history. That’s a tough gig for anyone, but Silva has handled it well, taking out challenger after challenger while keeping his own motivation to get better high.

“I like to always keep improving and trying new things, and putting on good performances,” he said. “I think that is what keeps me motivated and wanting more.”

That run of unprecedented excellence should be enough, but when injuries threatened this Saturday’s event, Silva went a step further, offering to fight on short notice in his home country to save the show.

“I see it as a responsibility as part of the UFC family to be there to help when needed,” he said. “This event could have been cancelled and I did what was right for me to do. I also wanted to give back to all my fans in Brazil and thank them for all their support in the past fights; I owed them a fight at home.”

They’ll get one, as Bonnar, who was semi-retired before getting the short notice call, knows that this is the one fight that could define his career should he win. And even if it didn’t, the one thing you can always say about “The American Psycho” is that when the bell rings, no matter who’s standing across from him, he’ll fight.

Then again, so will Silva, and whether he baffles opponents with his speed and movement, devastates them with his accurate and dynamic striking, or submits them with his underrated and overlooked ground game, he’s expected to deliver the type of crowd-pleasing performance that will leave his fans slack jawed once again.

And if he pulls off the win, the talk will immediately shift, not to a middleweight title defense against a Chris Weidman, Michael Bisping, or Tim Boetsch, but to a superfight with welterweight champion Georges St-Pierre, assuming the Canadian wins his November bout with Carlos Condit. It’s a fight Silva is addressing these days, making it clear that the time may finally be right for it.

“That’s a fight that the fans have wanted to see for some time,” said Silva. “He (St-Pierre) is a great champion; let’s see what happens.”

Could this be the exit strategy for the 37-year-old great: a fight with GSP followed perhaps by a battle with light heavyweight boss Jon Jones? Only Silva knows, but maybe the ultimate fight for him is the one he’s talked about for years, the one with his clone.

“The fans really want to see both of those fights (St-Pierre and Jones), but fighting my clone would still be interesting,” he laughs.