As far as Rafael Dos Anjos is concerned, he won’t be surprised if the biggest cheers from the crowd at Singapore Indoor Stadium on Jun. 17 will be for a Brazil native who makes his home in California.

“That’s for sure,” he laughs. “Team Evolve has three schools there and we have a huge fan base, so for sure I’ll be the hometown guy.”

He’s not exaggerating either. The globetrotting former UFC lightweight champion has been making the trip to Singapore to train since 2008, and he estimates that he’s been there at least ten times over the years.

“My head coach’s brother opened a school there and that was back in 2008,” he said. “After I had my first UFC win, he made the connection and I went there to Evolve to train for a month. And after one month, I went back there in 2010 and I lived in Singapore for three months straight with my family. For my last title fight, I did half my camp in Singapore. It’s amazing. The people are so lovely and friendly and I get great training there at Evolve MMA. I love that place.”
Related: Dos Anjos welterweight matchup w/ Saffiedine | RDA to make welterweight debut

So when he meets Tarec Saffiedine in June, it’s as much a home game as if he were to fight back in Brazil or in Southern California, and he’s excited about it, not just because of the locale, but because it signals a new beginning for him at welterweight.

Always a big lightweight, Dos Anjos made the sacrifices necessary to make the 155-pound weight limit, and it paid off for him, as he went 8-1 from 2012 to 2014, earning a shot at Anthony Pettis’ UFC title in 2015. Dos Anjos was in brilliant form as he took Pettis’ crown and he looked even better in stopping Donald Cerrone in 66 seconds to retain the belt nine months later. 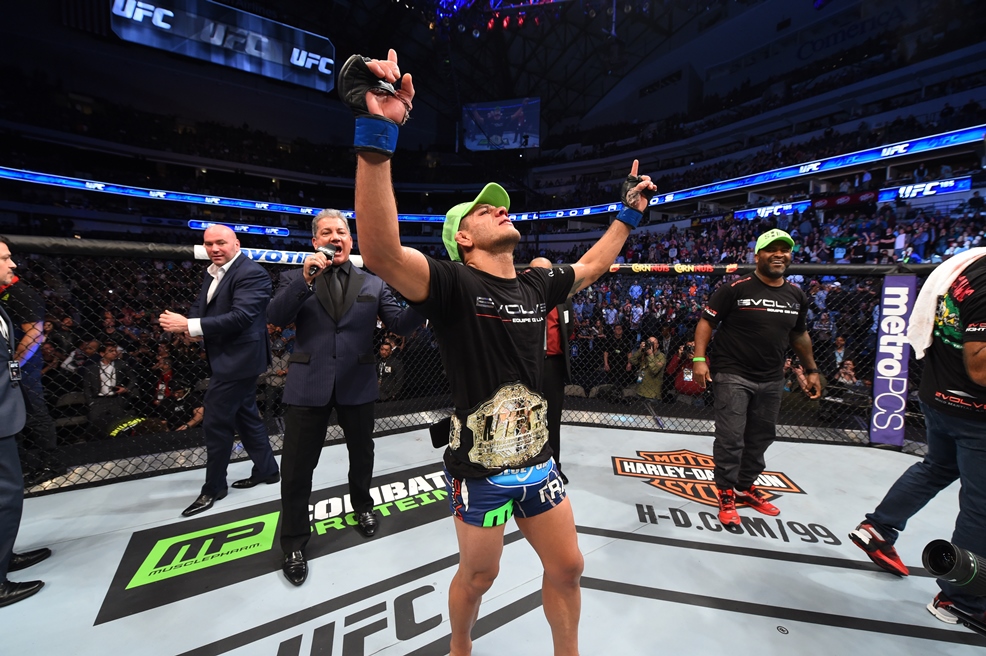 In March of last year, he was scheduled for the biggest fight of his career against Conor McGregor, but a broken foot scrapped him from the bout, and when he did return in July, he lost his belt to Eddie Alvarez after a brutal weight cut. He had a better time making weight in a Fight of the Night bout against Tony Ferguson last November, but after that loss, he decided that his days at 155 pounds were over.

“I don’t have to put my body and mind under that stress anymore,” he said. “It’s so stressful and it’s not just fight week or the weeks before. It’s two, three months of stress. And another thing (beneficial about moving to welterweight) is that I’ll be able to push harder. I cannot be the biggest guy in the division, but you can be sure I will be the guy pushing harder. I will push the pace because at 170, my body will be fresh and I will be ready to push hard for three or five rounds.”

Yet while the last year was rough for him professionally, he still has fond memories of what he did in the lightweight division.

“I was really happy and I had a great time when I was champion,” Dos Anjos said. “I came here to the United States and it was tough in the beginning, but I promised to my wife and kids that I will be the next world champion, and I made it. When I got it, we were so happy, like mission accomplished. That was the feeling. So I accomplished one mission, and the other mission is the 170 belt. And I will make it.”

His confidence is well placed, especially since he became champion of what many consider to be the toughest division in the UFC. There are no slouches at 170 either, but having been to the mountaintop once does make the next trip seem a little less daunting.

“Not because I was the champion, but lightweight is the toughest division, for sure,” he said. “There are so many good guys and I’ve been to the top before. I know the way up and I’m healthy enough for this, my mind is strong enough for this and I will make that run again.”

He’s also only 32 years old, and the way RDA sees it, the best is yet to come.

“I have at least five more years to fight at my best at a high level,” he said. “I feel that at 37 years old I’ll still be at my best. I take care of my body, I’m injury-free and don’t get hurt often, and I still have a lot in me. I know I can make it again.”