"In this camp I feel even better than my last camp, so I’m excited to go
out there and showcase some things I’ve been working on.” - Aaron Simpson 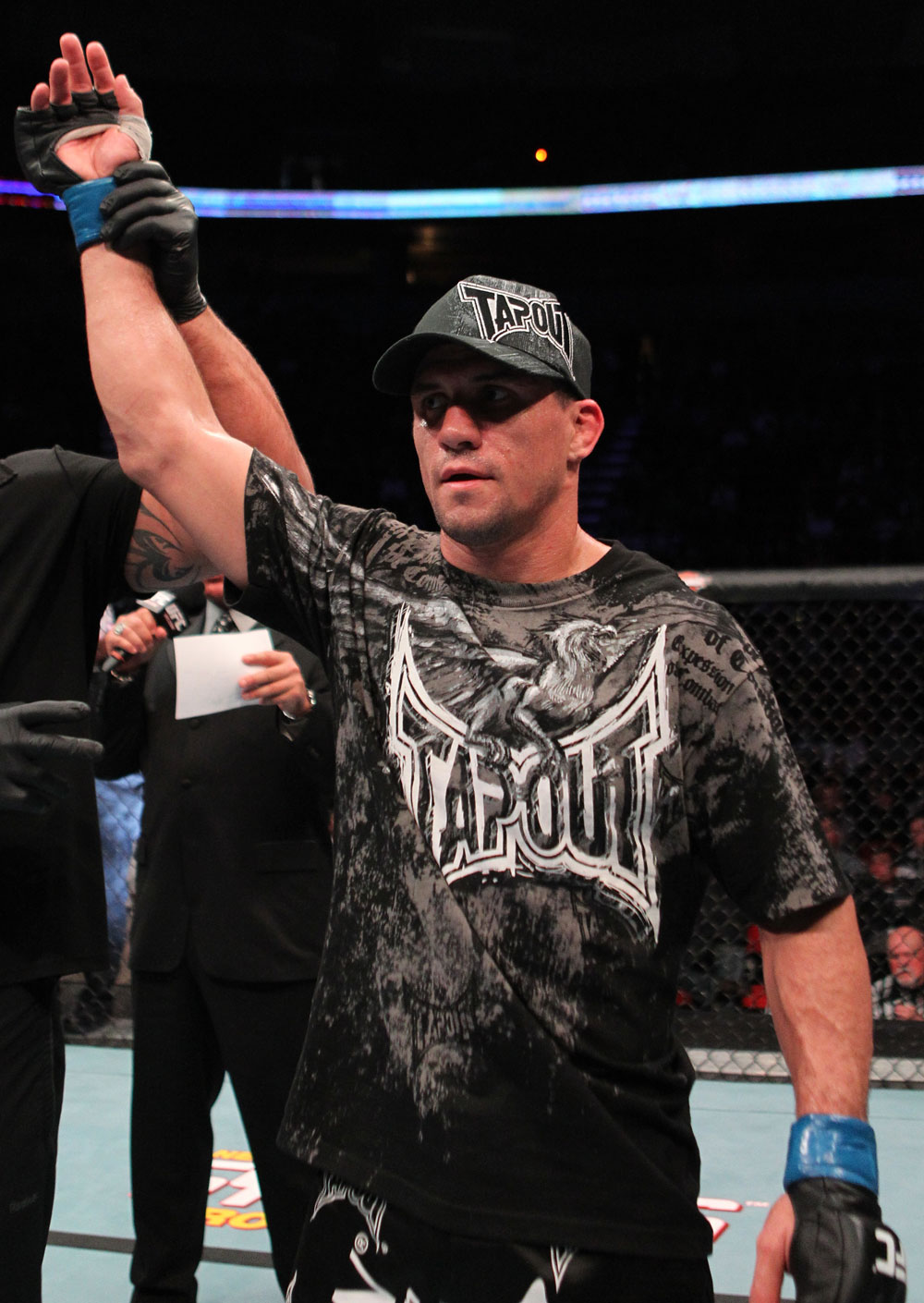 Following the dominance of Royce Gracie and his family’s brand of jiu-jitsu in the early days of the UFC, a strange phenomenon overtook the Octagon, as standout amateur wrestlers began to enter the world of mixed martial arts at a breakneck pace.

Don Frye, Dan Severn, Mark Coleman, Mark Schultz, Mark Kerr, Royce Alger, Randy Couture, the list went on and on. But it was when Aaron Simpson’s coach and training partner, 1992 United States Olympic Gold medalist Kevin Jackson, decided to move into the world of professional fighting that the college standout from Arizona State University decided to pay closer attention to this budding sport.

“He (Jackson) came in and said ‘I’m gonna fight in the UFC,’ and he brought in some gloves one time and we were slapping each other around because we had no idea what we were doing,” recalled Simpson. “I can remember having a huge party at my house with the whole ASU wrestling team over to watch KJ fight over in Japan. It was a really cool thing for us.”

Jackson lost that bout in Japan, his fourth as a pro (and third in the UFC), to Frank Shamrock in 1997, but it really didn’t matter to wrestlers like Simpson. To him and the rest of his peers on the mat, seeing wrestlers show their wares in a different combat sport and still be successful justified what they had been saying throughout their lives, that wrestlers were more than able to hold their own in a fight.

“It was a huge sense of pride for us,” said Simpson. “As a kid growing up, you’re just like ‘we’re the toughest athletes on the face of the planet,’ and you always had that pride. So when we were able to have guys that came up the same way we were coming up go out there and apply those skills in a legal environment, it was really cool for us and it gave our sport a big push.”

Yet while Simpson was intrigued by MMA and happy for his fellow wrestlers who were successful at it, he assumed his path in sports would lead him into coaching, not to a sport where the opportunities to make a decent living at the time were few and far between.

“We talked about it, but we never knew how it would grow and where the opportunities would lie,” he said. “I knew that I wanted to wrestle and compete and try to make a living doing stuff like that, but I never really had an opportunity to fight. But when it did, it all seemed to happen at the right time.”

And for Simpson, the right time came after being asked about fighting by friends like Josh Koscheck, Cain Velasquez, Ryan Bader, and CB Dollaway, and by 2007, the 33-year old was making his pro debut with a first round TKO of Tim Coulson. A year later, he was in the WEC, and after a single fight in the organization, he migrated to the UFC, where he has compiled a 4-2 record heading into his UFC 132 bout against Brad Tavares this Saturday.

In a sport where fighters can often see an accelerated trip from small halls to packed arenas, Simpson, now 36, has certainly been on the fast track, and it’s a plan he has embraced.

“For me, it’s kinda how I live my life,” he said. “I’m always looking for some type of excitement and looking for that new opportunity, and I have an ability to do something that not many 36 year olds or 37 year olds would not even think about doing. And I’m young in the sport and learning all the time. There are things that I’ll do in this fight that I haven’t done in my fights previous, and they’re things that young guys get to do on the smaller circuit, and I’m gonna try them out in the big one, and I’ve got to make it work. So it is exciting and it’s actually really cool for me to do that, and I get to do it with some great friends, and we have a phenomenal facility to do it in, which makes my life pretty cool right now.”

Adding to the cool factor is that he enters Saturday’s bout with a win, which is certainly better than walking into battle with the two fight losing streak he carried into his fight with Mario Miranda in March. In that fight, Simpson stopped his skid by going old school on the Brazilian, dominating the action with takedowns and ground control en route to a unanimous decision win. It was a far cry from his exciting knockouts of David Avellan (in the WEC) and Tim McKenzie, his three round war with Tom Lawlor, or even his two losses to Mark Munoz and Chris Leben, but hey, a win’s a win, and after two defeats in a row, he needed a W.

“We had a gameplan that we went through and I had to make sure that I stuck to it,” said Simpson, now 8-2. “There were times when I wanted to stand up and try to knock him out, but I knew that I had to, in a way, go the safe route, make sure nothing crazy happened, and get the victory. I couldn’t take any huge risks that I had taken in the past, and I will do in the future, but it was one of those things. When you’re kept in the UFC after two losses, your next fight has to be a win. I needed to get that victory. Now I feel better about myself, feel better about fighting, and I finally got to train out of a good camp. In my two losses prior to that, I was going from place to place, with no real continuity. So being able to train out of Power MMA and Fitness here (in Arizona) now that we’ve got our gym opened up has been a blessing. And in this camp I feel even better than my last camp, so I’m excited to go out there and showcase some things I’ve been working on.”

Simpson’s take on the Miranda fight is brutally and refreshingly honest, and while it won’t show up on any end of year award lists, he got the win he needed, he kept his job, and he also learned a lot about himself as a fighter, and those lessons will go along with him into Saturday’s bout with Tavares.

“It (the Miranda bout) helped me mature as a fighter,” he said. “I’m relatively young in this sport and I really had to grow up fast, fighting in the UFC after my fourth fight. Knowing that I could do that (go back to his wrestling to get the win), and knowing that I could have fought smarter in my two losses and I still think I was capable of beating both Mark Munoz and Chris Leben, who are studs in their own right, that gave me a little more confidence, and having the ability to fight smarter at times is always a good thing.”

And to be fair, Simpson is not the first fighter to fall victim to the wrestler’s disease, which is a unique trait that sees lifelong wrestlers become obsessed with striking once the chains come off and they can do in the Octagon what they could never do on the mat. And in Simpson’s case, he can really crack, making the idea of highlight reel finishes and Knockout of the Night bonus checks even more appealing.

“Definitely,” he said when asked if had started to fall in love with his power and striking too much. “And I was, in a way, coached to go out there and do that, and I kinda got away from the skills I’ve had my entire life, since age four, which was being able to take someone down and control them on the ground a little bit more. I’m not saying that’s what I’m doing this fight, because I do want to go back and showcase my hands a little bit more because I have been working hard on my standup with Dan Brandt, our Muay Thai coach. But it’s a work in progress, and I do feel I got a little ahead of myself sitting there and trying to bang with those guys. With Munoz, I think I should have controlled him more when I got those takedowns. I took him down five times to maybe one, and usually when you take someone down five times to one, you win those fights. And because he was getting right back to his feet, he was landing more punches and I lost the fight.”

Against Munoz, Simpson was in the fight the entire time in one of the better action bouts of 2010, and he started strong against Leben before getting clipped and stopped in round two. So the talent’s there, the work ethic’s there, and the power and wrestling are there. Now he just has to put it all together against a tough opponent in Hawaii native Tavares, who stepped in to face Simpson after an originally scheduled bout with returning Jason “Mayhem” Miller was scrapped when Miller was inserted into the Ultimate Fighter season 13 coaching slot alongside middleweight contender Michael Bisping.

“I was definitely gunning for “Mayhem,” but he had a better deal,” said Simpson. “The UFC gave him an awesome opportunity with the TUF show and a great name in Michael Bisping, and I think he will definitely beat him verbally and physically. It’s gonna be a great show. And it was a smart move on their part and I don’t have any qualms with that. I just had to keep training hard. We had about five weeks notice and that’s plenty of time to change the game plan a little bit for Tavares and move forward.”

As for Tavares, Simpson is definitely on his toes, especially after the 23-year old’s January win over Phil Baroni.

“He (Tavares) is someone who throws pretty heavy hands and will come at you,” said Simpson of his foe. “He’s definitely a hard-nosed fighter with some good wins. He fought my teammate, Seth Baczynski, on the show and at the Ultimate Fighter finale, and Seth is no joke. So I’m excited about the fight. It’s another time to get back in the Octagon, which is always a good thing.”

Absolutely. And this time, Simpson isn’t bringing just knockout striking power or dominant wrestling. He’s bringing everything a mixed martial artist has in his arsenal. Who would have thought it back when he was watching those UFC bouts back in 1997?

“This (becoming a pro fighter) was way out of left field,” said Simpson, “but I’m glad it happened, and I’m glad I’m here.”