Simpson Crashing the Welterweight Party for the First Time Wednesday

"I need to go out there and have people remember this performance." - Aaron Simpson 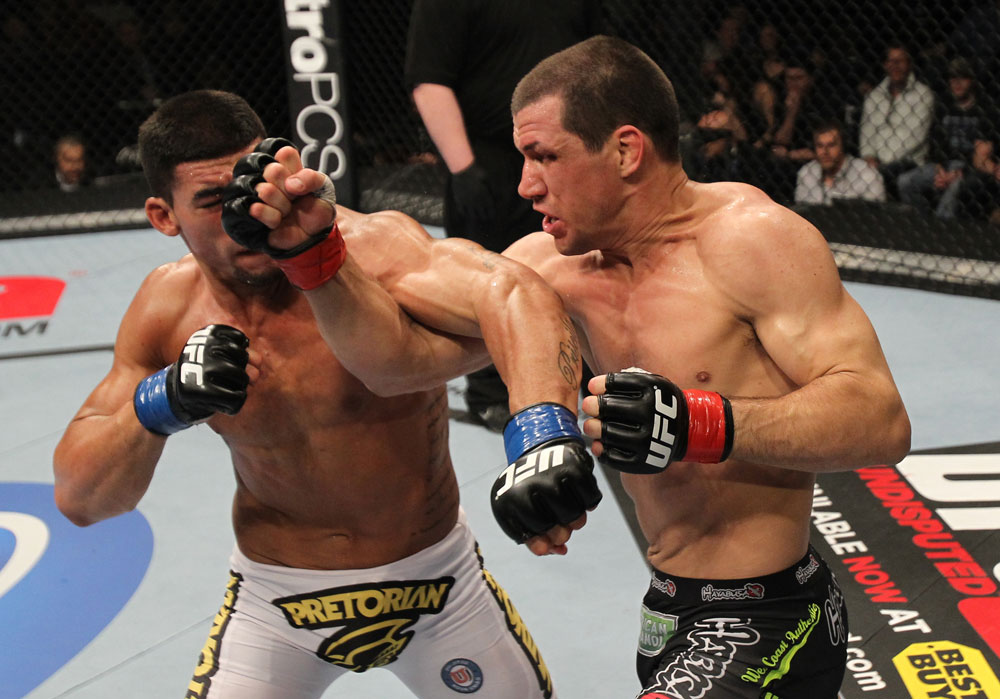 With a 6-3 record in the UFC at 185 pounds, Aaron Simpson wasn’t your run of the mill middleweight, a guy struggling just to stay afloat in the division ruled by Anderson Silva. Even the fights he lost - decisions against Mark Munoz and Ronny Markes, and a TKO defeat to Chris Leben – were competitive throughout.

But at UFC 145 in April, Simpson got a wakeup call that didn’t take place in the Octagon, but outside of it, as he spent some time with his teammate, light heavyweight Ryan Bader, and New York middleweight Chris Weidman.

“I’m standing next to the two and they look exactly the same in size,” Simpson said of Bader and Weidman. He knew immediately what was next for him.

“There’s no question I should be down at 170. I’m not in that weight class anymore.”

Nearly three months later, Simpson is a day away from that welterweight debut against Kenny Robertson, and when checking in with him last week, he had no complaints about the move 15 pounds south.

“It’s going great and going exactly how I thought it would,” he said. “I’m waking up at a little under 185 every day, drinking two gallons of water a day, and I’ve become a vegan for this last weight cut, and my energy levels are just through the roof. I haven’t felt like this in a long time, and I’m excited to get in there and scrap. I probably should have been here a long time ago, but it is what it is. I just need to go out there and make a statement at 170 and move forward.”

That statement was expected to be against longtime contender and former world title challenger Jon Fitch, but an injury sidelined the San Jose resident from Wednesday’s fight at the HP Pavilion. In stepped former Division I wrestler Kenny Robertson, a tough challenge for sure, but one without the name recognition Fitch has. Simpson admits to some initial disappointment when he was notified of the switch, but at this point in his UFC career, the 37-year old knows that a win is a win no matter who it comes against.

“We asked for the Fitch fight and it was a thing where I said I’m making this weight, I don’t want to just fight anybody. I want to step in there and move up the ladder quickly,” he said. “I was disappointed for a couple hours and then I had to get back to reality and realize that I am fighting, and a fight’s a fight, and opponents are tough regardless. If they’re in the UFC, they’re there for a reason. I’ve been preparing for Kenny Robertson from that day forward and he’s someone I’ve gotta beat.”

The Robertson fight comes five months after Simpson’s last Octagon appearance, a three round split decision loss against Brazil’s Ronny Markes. The fight was far from a barn burner, and it snapped a three fight winning streak for “The A-Train.” But the worst part of the whole night was that it was the first time the former two-time All-American wrestler from Arizona State was overpowered in the Octagon physically.

“I gave up 25 pounds or something in that fight, and I felt it,” he said. “I couldn’t get off the cage and it was draining me just trying to even move him. And I’m hard to keep on the cage. I feel pretty tough there, and it was almost bewildering to sit there and get off that sucker.”

It was the first sign for Simpson to make the move from middleweight to welterweight, and basically, it’s the way things are going these days. Fighters cut significant amounts of weight to make their respective divisions, and in doing so, those that naturally belong in a particular weight class are forced to move to keep up with the Joneses.

“In college and high school, they weigh in an hour before, so that makes it a little more realistic to fighting at the weight that you train at, and you don’t see the massive weight drops,” he said. “But it is what it is right now, so you’ve gotta play by the rules of the sport. I’m submitting to that, I guess. I know what the rules are and now if I want to be successful, I’ve got to play by the rules. That being said, it would be nice to have true middleweights, guys that step into the cage at 185 pounds, give or take a couple pounds.”

Aiding Simpson in his drop to 170 is a change in diet from vegetarian to vegan. He’s already spoken of the increased energy he feels these days, and he wasn’t concerned making such a significant life change before such an important fight.

“I’ve heard so many great things from other athletes and other people about this way of eating that I wasn’t really worried about it at all,” he said. “It was another way for me to get more disciplined with my training and it just brings me closer to going out there and reaching my dreams.”

Those dreams haven’t swayed with the move in weight classes, as he’s still chasing a world title, just in a different neighborhood. As for his new neighbors, he’s already had his eyes on them.

“I always looked at the welterweight division and I thought, ‘jeez, I can beat any of those guys,’” he said. “But I was doing all right at middleweight, so I said let me see what I can do at middleweight and not have to cut. But there came a time when everyone’s cutting and all those guys are getting that much bigger and having that advantage of size, and I feel like with that mindset that I can beat any of the guys at welterweight that it gave me the idea that I can cut.”

Simpson isn’t thinking of a leisurely tour of the division though. At 37, he knows that if he’s going to make a move, the time is now, and it all starts with Wednesday’s bout with Robertson.

“There is definitely a sense of urgency,” he said. “I feel like I’ve honed my skills. I only had a few fights outside of Zuffa, so I’m ready. It’s not like I need to stay down in the lower tier and really keep working on it. I feel like I’m where I need to be to make that move, so yeah, the faster the better, and I need to go out there and have people remember this performance.”