Simon out to prove he belongs 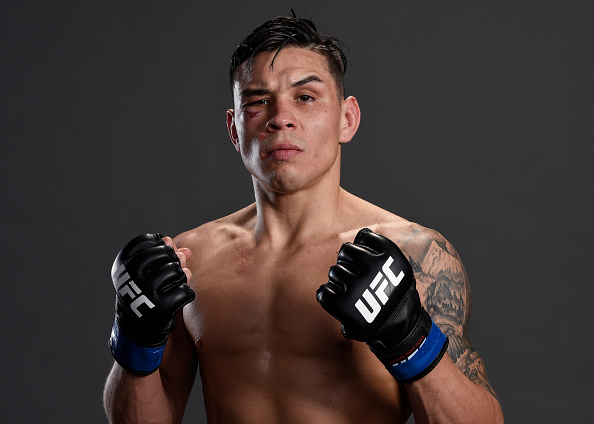 Ricky Simon poses for a portrait backstage after his victory over Merab Dvalishvili during the UFC Fight Night event at the Boardwalk Hall on April 21, 2018 in Atlantic City, New Jersey. (Photo by Mike Roach/Zuffa LLC/Zuffa LLC via Getty Images)" />
I should have kept my mouth shut. The topic was harmless enough, and Ricky Simon and I both agreed that now that he was in the UFC, it wasn’t going to be tough finding fights that stuck anymore. He was particularly pleased that after some starts and stops over the years on the regional circuit, he was finally going to get to throw hands with fellow bantamweight prospect Benito Lopez this Saturday in Los Angeles.

But days later, Lopez was out of the fight due to injury. It felt like old times to Vancouver, Washington’s Simon, who has had more than his share of opponents leave him stranded.

Simon will get to fight on the UFC 227 card at STAPLES Center, as Montel Jackson stepped in for the bout, and at this point, that’s all that matters for the 25-year-old, who feels like he has something to prove in his second trip to the Octagon.

“It was crazy, it was exciting, it was back and forth, but I also feel like it wasn’t who I am as a fighter,” said Simon of his first UFC bout against Merab Dvalishvili in April. “I didn’t get to show what I can do, so that’s why I’m excited to put that one past me and beat my opponent on August 4th.”

Simon may feel disappointed with his win over Dvalishvili, but he’s probably the only one complaining, as the Fight of the Night bout had a little bit of everything, including a come from behind surge by Simon that ended matters by submission as time expired. If you saw the fight, you wanted to see Simon again.

“I look at that one and I get mad at myself,” he said. “I know I’m way better than that. Right after the fight, my body needed the rest and I needed the time to recover, but my mindset was to get back in there and prove what I can do.”

He already proved a lot, including the ability to face adversity head on and put it to sleep – literally.

“In my head, I’m never out of it,” he said. “I truly believe you gotta put me away to beat me. I hate that I was down on the scorecards, but it was great for me to be able to show that I’m not just a dominant fighter, but that I can come back and finish strong as well. The first round I got beat up a little bit, but I started coming back in the second round and started landing my own shots and takedowns, and in the third round I feel like I started taking it away too.”

That kind of heart and grit is something you can’t teach, but sometimes a fighter won’t find out about it until he needs it. Simon found it early on.

“I realized that about myself at a very young age through wrestling,” he said. “I could feel it when guys would give up. It might be a close match and then I get a last minute takedown and something leaves them. I never wanted that to be me, and I don’t know where it comes from, but I know that feeling when I do it to somebody else, and that’s just not me. Don’t let me feel that.”

But oh how he loves it when he feels his opponent break.

“I live for that,” Simon laughs. “If I feel you give up a little bit, I’m gonna pour it on even more.”

Yeah, Simon sounds like must see TV already, and now that he’s in the UFC, he’s going to push even harder to keep everyone watching.

“This is awesome,” said Simon, a veteran of the first season of Dana White’s Tuesday Night Contender Series who earned his call to the UFC after two more wins on the regional circuit. “It’s been so tough. (Before the UFC) I was still broke, I was warming up in the tent, it was just ridiculous, and it’s just surreal what’s happened in the last six months. I can train full-time now, I don’t have to work, it’s crazy.”