Silva vs. Sonnen II - No Calm Before Saturday's Storm

Anderson Silva and Chael Sonnen meet at the pre-fight press conference for their Saturday bout in Las Vegas... 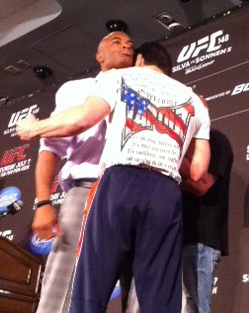 There was no thaw in the ice between UFC middleweight champion Anderson Silva and number one contender Chael Sonnen at the ritual pre-fight press conference at Lagasse’s Stadium in Las Vegas Tuesday, no change in the weather between the two best 185-pounders in the mixed martial arts world.

In other words, the anticipation for the biggest rematch in the game this Saturday night at the MGM Grand is continuing to rise, and neither fighter is blinking under the bright lights, as evidenced by Silva’s chest bumping of Sonnen during a post-conference photo op that forced UFC president Dana White to step in and separate the two.

“Playtime is over,” said Silva earlier in the conference. “He can say whatever he wants. It’s over. On Saturday night a lot of things are gonna change. It’s gonna be much different after Saturday.”

Sonnen, who pushed the longest-reigning champion in UFC history to the brink of defeat in August of 2010 before getting submitted in the fifth round, didn’t pull back from his two years of verbal attacks on the Brazilian with his foe sitting just a few feet away, saying, “I offer absolutely zero apologies. And secondly, if you’re not willing to go too far, then you’ll never go far enough in life, and I don’t care. I don’t promote fights, I pick fights. I’m like Jon Jones, I sound like Sean Combs, and I’ve got trombone-sized stones like John Holmes.”

It was typical Sonnen, the most polarizing figure in the UFC and one of the most, if not the most, compelling. He fielded questions with his usual wit and one liners as Silva sat stoically, occasionally grinning or grimacing, depending on the response from his rival. Yet while there wasn’t a stream of incendiary comments from “The Spider” like there were on last week’s media teleconference, he was no shrinking violet either, making it clear that he wasn’t backing down from such statements, not now, and not on Saturday night. But when asked if he was risking getting too emotional before the 10th defense of his middleweight crown, he answered with an impish smile:

The post-conference altercation may have put that desire into question, but at the same time, you get the impression that Silva knows exactly what he’s doing, and that he just can’t wait to once again put his hands on his nemesis. So how will the fight go? Both men have vastly different takes on it.

“I’m gonna walk out there and as soon as I get the chance I’m gonna wait for him to throw a kick like he always does, I’m gonna put my forehead in his chest, run him into that cage, put him on his prissy little ass and run this (raises fist) into his head for 25 minutes until he gives up,” said Sonnen. “That’s my prediction.”

Is it fight night yet?