A big card gets even bigger as the middleweight championship rematch between Anderson Silva and Chael Sonnen moves to Las Vegas' UFC 148 event on July 7th... 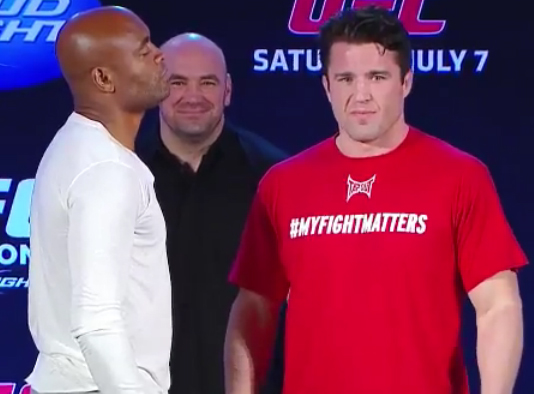 A stacked UFC 148 card in Las Vegas just got another jolt of star power today, as UFC President Dana White announced that due to scheduling conflicts with the United Nations Conference on Sustainable Development on June 20-22, the June 23rd rematch between middleweight champion Anderson Silva and number one contender Chael Sonnen has been moved from Havelange Stadium in Rio de Janeiro to the MGM Grand Garden Arena for the July 7th event in the fight capital of the world.

White made the announcement Tuesday morning at a press conference in Rio with both Silva and Sonnen both in attendance.

“It makes no difference,” said Silva, who came from behind to submit Sonnen in the fifth round of an epic UFC 117 bout in August of 2010. “I’m a fighter. A fight is a fight, and once you go up there, everything changes. I’ll be fighting and representing Brazil in the same manner I always have.”

“It was disappointing, especially the thought of coming to a stadium,” said Sonnen, who has defeated Brian Stann and Michael Bisping since the first bout with Silva. “In Toronto, (Jake) Shields and GSP (Georges St-Pierre) did 55,000 seats and I was hoping to be part of breaking that and getting it done here in Brazil. But look, Las Vegas is the fight capital of the world, this is the biggest fight in the history of combat - boxing, wrestling, fighting, anything that’s mano e mano – there’s nothing that’s been bigger than this and it’s gonna take place on July 7th.”

Joining Silva-Sonnen II in Vegas will be two rubber matches - the bantamweight championship bout between Dominick Cruz and Urijah Faber and the light heavyweight clash between Tito Ortiz and Forrest Griffin – as well as the eagerly anticipated Rich Franklin vs. Cung Le and Michael Bisping vs. Tim Boetsch bouts, making this one of the biggest events in organization history.

Brazilian fans will still get a dose of UFC action this summer as well, as the UFC 147 card featuring another big rematch between Vitor Belfort and his rival Ultimate Fighter Brazil coach Wanderlei Silva will go on at a site to be determined. Also on the card will be the TUF Brazil middleweight and featherweight finals, a heavyweight bout pitting Fabricio Werdum against Mike Russow, and White said that a championship fight featuring featherweight boss Jose Aldo is also a possibility.