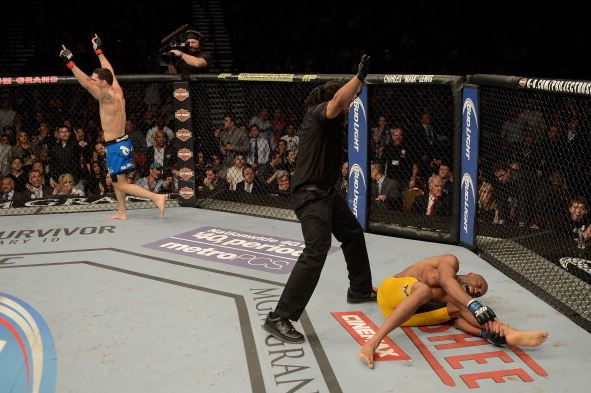 LAS VEGAS, December 28 – The highly-anticipated rematch between UFC middleweight champion Chris Weidman and Anderson Silva met an abbreviated end Saturday night at the MGM Grand Garden Arena, with an injury to Silva’s left leg forcing a second round stoppage in the main event of UFC 168.

“He’s still the greatest of all-time,” said Weidman, who was awarded the second round TKO victory in a bout that was shaping up to be a classic before its sudden finish.

It was a night of surreal events, with Silva walking to the Octagon first for the first time since his 2006 challenge of Rich Franklin for the middleweight title. But once he stepped through the gate, it was as if he was back home again. He did have to wait for the champion though, and boos greeted the Long Island native, whose entrance song, Tom Petty’s “I Won’t Back Down,” was more than appropriate as he prepared to face “The Spider” a second time.

And he didn’t, meeting Silva in the middle of the Octagon and firing off a front kick before scoring a takedown a little less than 30 seconds into the fight. Silva rose quickly, but with Weidman attached to him. Silva fired off knees at Weidman, but the champion responded with a right hand that dropped the Brazilian. Weidman unleashed ground strikes in an attempt to finish, but Silva took the shots well and tried to work from the bottom position as the New Yorker stayed busy with strikes and neck crank attempts. Silva did get off some shots from his back, bloodying the champion, but when the bell rang, it was clearly Weidman’s round.

Silva opened round two with a leg kick, clearly looking to slow Weidman’s forward motion as he got into a standup rhythm. Weidman responded with a thudding kick to the midsection, but when Silva fired back a left kick, Weidman checked it and Silva’s leg broke in the process. Silva immediately fell to the canvas, with referee Herb Dean intervening at the 1:16 mark, a result eerily reminiscent of Corey Hill’s identical injury in his 2008 bout with Dale Hartt. Hill would make a full recovery and fight again, but it’s obviously too early to tell whether the same will be true for the legendary future Hall of Famer.