"I’ve stayed busy with fights and with the reps I’m getting; I’m becoming
a veteran with the UFC. I’m
getting better and better the more time I get to spend inside the cage." - Steven Siler 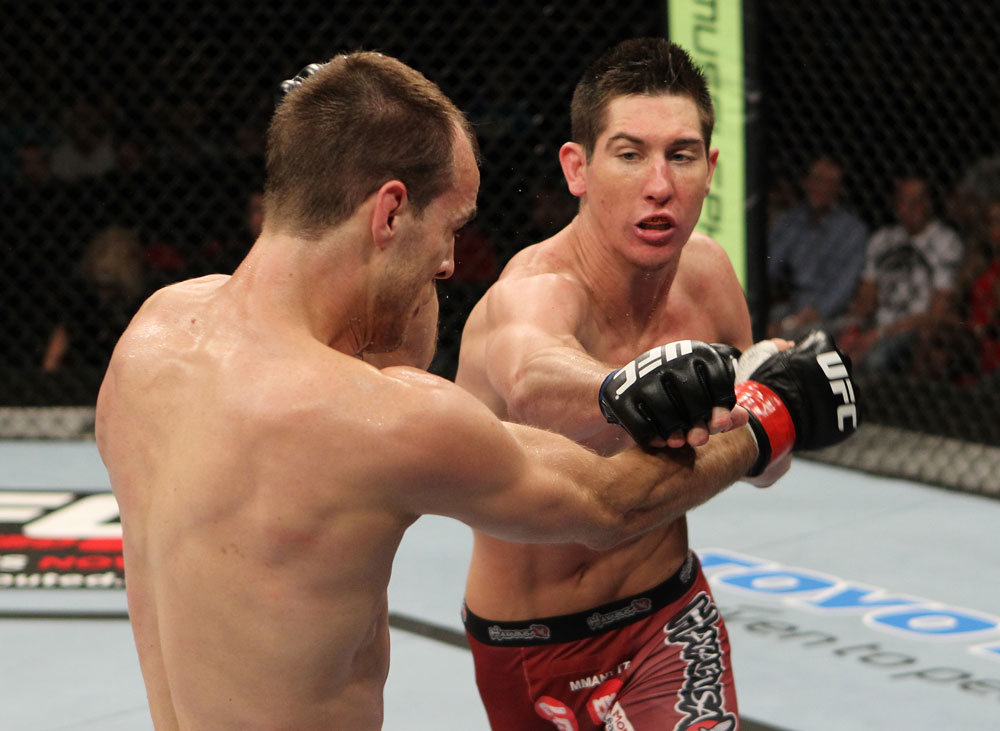 Looks can certainly be deceiving.

Based on Steven Siler’s presentation, the halls of a corporate office would be the likely environment where he earns his living, a place where the rigorous world of cage fighting is water cooler fodder on Monday mornings, as people in the process of shaking off the weekend cobwebs recount in vivid detail the action they witnessed Saturday night, and offer their armchair opinion what “Fighter A” should have done to avoid getting put to sleep by “Fighter B.”

While those conversations take place in offices all across the country on a weekly basis, the California native is not the one doing the talking, rather the one being talked about.

That said, success on the sport’s biggest stage doesn’t take away from the fact he looks like the kid next door. The 26-year-old is tall and lean - borderline lanky - with a wide-eyed and youthful disposition that seems miles away from the chaotic, sometimes brutal, profession he trades in. While the current era of mixed martial arts is far from the gladiator “blood sport” tag once unfortunately slapped on the sport years ago, Siler still seems miles from belonging in the mainstream product that hits nationally broadcasted television every week.

That, of course, is until he steps into the Octagon and goes to work. Once the cage door closes it becomes clear - painfully so for his opposition - that Siler not only belongs mixing it up with his 145-pound peers, but is very proficient at his craft.

Since joining the UFC in 2011, “Super” Siler has found victory in five of his six showings inside 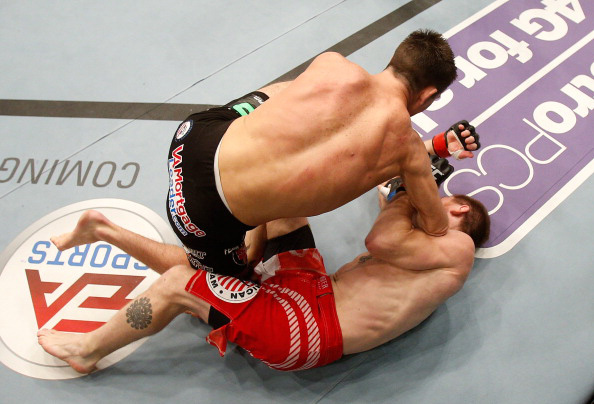 the Octagon. His 2013 campaign has featured back-to-back impressive performances where he’s defeated Kurt Holobaugh and Mike Brown, respectively. Yet where his lopsided unanimous decision win over Holobaugh at UFC 159 in April put him back into the win column, his 50-second drubbing of former WEC featherweight champion Mike Brown at UFC Fight Night in August put his stock at an all-time high.

“I started doing this at 18 and it’s going on nine years that I’ve been doing MMA. I have 35 or 36 fights already and I definitely feel experienced in the actual fighting aspect. I feel prepared every time I go in there.

Brown’s return from a brief retirement had the buzz of anticipation surrounding it, but Siler put him away in lighting quick fashion and stole the spotlight of the moment in the process. While the victory over the American Top Team staple didn’t catapult him into the top 10 ranks, it certainly allowed him to jump a few steps closer to his goal. Siler could feel the momentum starting to pick up, and rather than wait for his next fight to come around, the Pit Elevated fighter took the initiative and seized an opportunity as soon as it became available.

Former lightweight turned surging featherweight Nik Lentz was slated to face Dennis Bermudez at Fight for the Troops 3 on Nov. 6 in Fort Campbell, Kentucky. But when “The Carny” was tapped to face Chad Mendes at UFC on FOX 9 in December, the UFC needed someone to fill the void left by Lentz’s departure, and Siler was the fighter who stepped up.

“I was excited to get the call and to get back inside the cage,” Siler explained about his return to action. “I was bugging my manager and telling him since I don’t have a fight scheduled I was starting to feel unemployed. I was feeling useless because I wasn’t doing anything. I like to stay active and do as much as I can. I’m always staying ready.

“I stay on (UFC matchmaker) Sean Shelby and tell him I’m always ready for quick fights and to keep on giving them to me because I’ll always be ready. I’ve been lucky not to get injured, and as soon as they called me to say they had a fight for me, I accepted it without hesitation and didn’t even care who it was against. I was just happy to get back into the cage.

He will face his fellow TUF alum Wednesday at FFTT 3 and the bout will come at a crucial juncture for both fighters. Where Siler has put together two consecutive victories, Bermudez has doubled those efforts as he’s built a four-fight winning streak. Both are considered rising prospects in the featherweight ranks, and the winner of their tilt will move up to face some of the bigger names in the division, while the loser will undoubtedly be kept in developmental waters for the time being.

Siler recognizes what is at stake against Bermudez and believes he is ready to trade his prospect tag in and move on to the next level at 145 pounds.

“More than likely I believe it will,” Siler answered when asked about the circumstances surrounding the bout. “We have both been on a run and on solid winning streaks. He’s won four in a row and I’ve won five out of my last six. I think the winner of this fight is deserving of a top 10 guy in their next fight. But like I said, I’m just hoping to stay active. I don’t care who they give me. I just want to get the fight and another after that. I just love staying active.

“Looking at the card I really do see this fight as being the Fight of the Night. Dennis has proved he can do it in his last few fights by getting the Fight of the Night bonus in his fight with Matt Grice. I’m not sure if he got it against Max Holloway or not, but that was a great fight. Dennis proves he can go through war and put on a great fight for the fans. I believe Holobaugh and I had the same thing and I put on a good show with a lot of my fights as well. I think this has potential to be the best fight on the card and people are going to be excited to see the fireworks happen.

With their respective backgrounds, the matchup between Siler and Bermudez appears to be a stylistic clash between a wrestler and submission artist - at least on paper that is. In recent showings, Siler has opened up his striking game and Bermudez has shown a willingness to throw caution to the wind and engage in fire fights on the feet. His 15-minute slugfest with Grice was an early candidate for 2013’s Fight of the Year, and while Siler isn’t expecting full tilt chaos at FFTT3, he’s fully prepared the business to come fast and furious against Bermudez.

That said, he’s also more than willing to work with his back on the canvas if that is where the action ends up. Throughout his time in the UFC, Siler has proven to have a solid ground game. Yet, in his bout with Darren Elkins - his lone setback under the UFC banner - the Indiana native was able to put Siler on the ground and control him for three rounds. With Bermudez’s strong wrestling foundation, the chances of the fight hitting the mat are high, but Siler is more than confident he can hold his own against Bermudez on the canvas.

“I’m not really too worried if I go to the ground,” Siler said. “I feel comfortable there. People keep on going back to the [Darren] Elkins fight, but that was just an ‘off’ night. I didn’t want to be there. I wasn’t mentally prepared for the fight. Even though I know we only fight a handful of times a year and we should always be ready, some days you just don’t show up and that was the one day I didn’t show up. I just had a bad fight. I feel comfortable on the ground and I believe I have a great 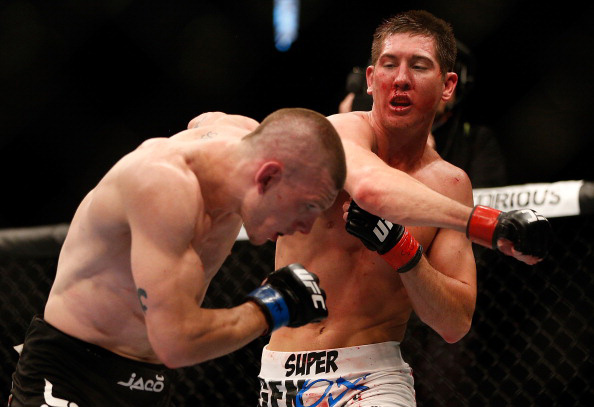 guard. If any fight does go to the ground, whether it be a top 5 or top 10 guy, it doesn’t matter to me. I’m comfortable on the ground no matter who I’m facing.

“I believe I have an advantage in the striking department,” he added. “I’m not saying I’m going to go in there and knock Dennis out, but Dennis is a really strong, relentless wrestler like Mike Brown was, who is going to come forward and throw strikes to get in and take the fight to the ground. I’ve been very fortunate to go from one camp where I was preparing for this exact thing to this camp where I’m expecting him to use a similar attack. I’ve been working on letting my hands go while backing up, but at the same time, not putting myself in a position where he’s going to be able to take me down.”

With a victory over Bermudez, Siler will find himself moving quickly toward the division’s best fighters. While the featherweight collective has been running under the radar for the past several years, those conditions have changed in 2013 and done so in drastic fashion.

Despite Brazilian phenom Jose Aldo continuing his dominant reign atop the division, a handful of potential contenders have engaged in a heated title race that has brought some much needed attention to just how much talent exists in the 145-pound fold. Siler is excited to see the spotlight finally hitting the featherweights, and he is proud to do his part in keeping the weight class rocking for years to come.

“It’s a great time for our division,” Siler said. “We have a lot of the top names jockeying for that title fight. Chad Mendes deserves a title shot. Ricardo Lamas looks like he’s finally going to get his chance. Cub Swanson is right there. We also have Frankie Edgar and BJ Penn coaching The Ultimate Fighter. The 145’ers are getting a lot of recognition this year and I’m glad to be a part of it.”