Sijara Eubanks Wants to Stay on The Gas Pedal

Sijara Eubanks is searching for a big finish at UFC Vegas 10 on Saturday
By Zac Pacleb, on Twitter: @ZacPacleb • Sep. 10, 2020

Sijara Eubanks has one thing on her mind.

“Finish one of these damn fights,” Eubanks told UFC.com.

In five UFC fights, every one of Eubanks’ bouts went to the judges’ scorecards (although she did score a submission and a knockout while on The Ultimate Fighter). And while she would like to end fights before the final horn sounds, she was mostly happy to end her two-fight skid with a win over Sarah Moras in May.

After the bout, she took the opportunity to tout her cardio as good enough to hold up in a three-round war every time. Valiant, sure, but those in her corner tried to bring her back down to earth a little bit.

“My coach was like, ‘Don’t brag about that,’” Eubanks said, laughing. “I’m always looking for a finish, and I’m going to be looking for another one on Saturday. I really think that would be my feather on my growth cap, to finally get some finishes because I’m landing shots. I’m hitting these girls upside their head, so I’m just going to keep punching them and pray this one, this Saturday, takes a fall.”

When Eubanks shared her weekend wishes, they were aimed toward her scheduled September 5 bout against Karol Rosa, who stepped in when Macy Chiasson pulled out of her date with Eubanks. Rosa, however, pulled out herself just days before the fight due to complications while cutting weight. As a result, Eubanks was then matched up with fellow top 15 bantamweight Julia Avila and rescheduled for September 12.

The change of opponent isn’t a huge deal to Eubanks, who is mostly hoping to increase her activity inside the Octagon.

“As soon as I was done with Sarah Moras, I was like, ‘Line me up another one’ because historically, the last two years, I was fighting every six months,” she said. “I think that having more frequent appearances is going to help me with this momentum.”

More activity also means more real-time experience in the Octagon, naturally, which is something Eubanks understands cannot be replicated, no matter how high-quality her training is on a day-to-day basis.

“When you see that UFC canvas, and you got the lights, and you got your fight week, and you go through the adversity that you have to fight through in a fight, that just comes with experience,” Eubanks said. “There’s just nothing else like it than to get out there and do it.” 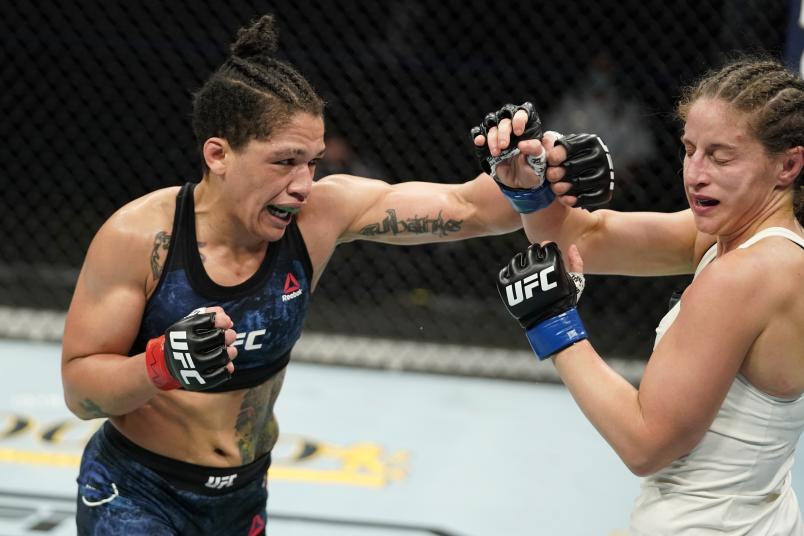 JACKSONVILLE, FLORIDA - MAY 13: (L-R) Sijara Eubanks punches Sarah Moras of Canada in their women's bantamweight bout during the UFC Fight Night Event at VyStar Veterans Memorial Arena on May 13, 2020 in Jacksonville, Florida. (Photo by Cooper Neill/Zuffa LLC via Getty Images)

JACKSONVILLE, FLORIDA - MAY 13: (L-R) Sijara Eubanks punches Sarah Moras of Canada in their women's bantamweight bout during the UFC Fight Night Event at VyStar Veterans Memorial Arena on May 13, 2020 in Jacksonville, Florida. (Photo by Cooper Neill/Zuffa

Although her record stands at a modest 6-4, the 35-year-old has shown she has the ability and talent to mix it up with the best, holding wins over Roxanne Modafferi and Lauren Murphy, as well as nearly taking down bantamweight contender Aspen Ladd in a Fight of the Night effort.

With each fight, Eubanks feels herself settling into the fighter she is becoming, and she can look back on each of her contests with the candor and humility necessary for growth.

“Aspen Ladd almost strangled my ass in the second round,” Eubanks said, reflecting on their 2019 bout. “I was like, ‘Agh.’ To come back – and the past is the past. I would probably score that a little differently, but when I came back in the third, I knew I was down because a round like that, you’re not getting, and just to be able to bite down on your mouthpiece and stick to the game plan and stay focused, you gotta have short-term memory in the cage. The 60 seconds they give you (between rounds) go like that, and that’s your time to sort of let the last round go and get ready for the next one. Moment to moment in the fight, the tide of a fight can change in the middle of the fight, in the middle of the round.”

In Avila, Eubanks welcomes an all-action fighter who is coming off a 22-second, first-round TKO win over Gina Mazany. A win over the “Raging Panda” would up Eubanks’ UFC win tally to four, and in the ever-open bantamweight division, an increase in activity and finishes could launch Eubanks up the ladder in no time.

Moreover, the gaining of experience continues to pay off. Eubanks said she feels her ability to stay locked in during a fight is increasing, and there’s a sense of urgency to continue to capitalize on that upward trajectory when she enters the Octagon on September 12.

“You can’t come off the gas,” she said. “So, that kind of thing just sort of helps me in the UFC. It’s a different level of intensity fighting in the UFC and actually getting that kind of experience in the cage.”