Eubanks Lost To Ladd Two Years Ago And Is Seeking Revenge At UFC Rochester
By Jon Gagnon • May. 16, 2019

Spoiler alert: Sijara Eubanks expects a shocking, unpredictable winner to rise to the top during Game of Thrones’ season finale this Sunday.

Before sitting down with UFC.com to discuss UFC Rochester and her fight against Aspen Ladd on Saturday, Eubanks had to get out her fan theories about who will reign the fictional Seven Kingdoms.

“The writers are always trying to surprise you,” Eubanks said.

She isn’t expecting fan favorite Jon Snow or Daenerys Targaryen to finish the victor. Eubanks anticipates the conclusion to be an underdog story that catches people off guard. Coincidentally, the former women’s flyweight contender is playing a similar underdog role this Saturday.

Eubanks is leaving the flyweight ranks to move up and face the sixth-ranked bantamweight, Aspen Ladd, who handed Eubanks her second loss just two years prior.

“A little bit of revenge creeps in,” Eubanks said with a smirk. “I try not to let (revenge) overwhelm me, especially when you watch Game of Thrones, right? Too much emotion of anything I don’t think is great for fighting. So I try to keep everything in control.”

So before Eubanks hurries home Sunday to catch the final Thrones episode, she’ll be looking for her own sort of vengeance in Rochester.

Here’s the rest of what Eubanks thinks about her new division and much more.

UFC: How does it feel to be a bantamweight and what has training camp been like?

Sijara Eubanks: It feels great. Training camp has been phenomenal and I’ve been able to work on things that I couldn’t as a flyweight. Flyweight everyday was about how much I weighed. And now I can focus on wrestling, grappling, strength and conditioning and be more of an athlete now. This is the best athletic shape I’ve been in in two years.

UFC: Aspen Ladd had an impressive win over Tonya Evinger recently, did you watch that fight and how has it been preparing for Ladd?

SE:I did see that fight. It was a solid “W” for Aspen. We’re preparing for her the same we’ve prepared for everyone else. We’re just looking to sharpen my tools and get the best “Sarge” in the cage. As far as gameplan goes, I like to leave that up to the coaches. It’s always just about being the best athlete that night.

UFC: What challenges does Ladd bring to you?

SE: She’s a very forward-pressing fighter, she throws a lot of volume and has a good (gas) tank. Those are things we’re preparing for. 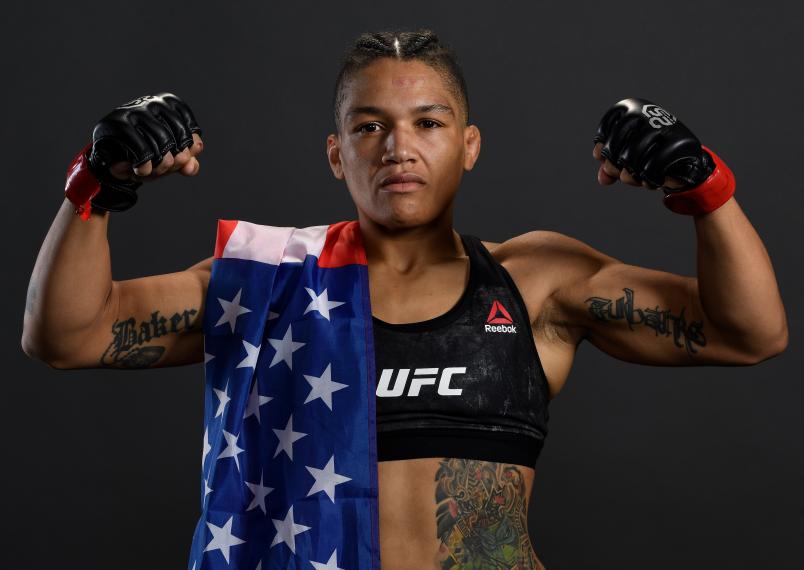 UFC: What’s your ideal version of how the fight plays out?

SE: Winning. Anyway shape or form. I’m not the kind of fighter to pick the round or the way. Walking out with my hand raised is going to be the most ideal situation. Obviously, I love to finish fights. That’s what I want to do. If I could that would be a cherry on top but really we’re just trying to secure the bag and that’s a “W”.

UFC: Do you like into the rankings at all and what beating a ranked fighter would do for your career going forward?

SE: I’ve fought ranked fighters before and they’ve given me a good fight here coming into to the bantamweight division. She’s ranked sixth so I think that definitely helps me coming into this new division and establish where I’m at in the pecking order. My goal is to get to that belt one way shape or form.