An up-and-coming heavyweight gets the biggest and most experienced test possible in the main event of the next batch of fights going down in Las Vegas this Saturday, as Augusto Sakai challenges heavyweight mainstay Alistair Overeem. The co-main event features the rescheduled bout between the rising Alonzo Menifield and always tricky Ovince Saint Preux, and an important and intriguing women’s flyweight bout shapes up to be a good test between talented contenders.

To get an idea of how these matchups might shape up once the cage door closes, we took a look at the stats and to see what kind of trends might clash on September 5.

(All stats according to UFC’s Record Book and Fight Metric as of September 3, 2020, and only include active athletes in their respective division unless noted otherwise)

What It Means: One of the most accomplished mixed martial artists of his era, Alistair Overeem has continued the evolution of his game deep into his career, and that development has allowed him to stay in the mix among the heavyweight elite. Making the most of his 6-foot-4 frame and 80-inch reach, Overeem keeps fights at his range and tempo, negating most of his opponent’s offense. He is patient in his approach and makes the most of openings, often to punishing effect. He has also shown an improvement in his grappling, using wrestling to shut down powerful foe’s and ground-and-pound his way to victory, or at the very least tire his opponent out. He is as experienced a high-level fighter as any in mixed martial arts, and his experience continues to show up in how he manages adversity and the ever-coming wave of up-and-coming heavyweights.

What It Means: Augusto Sakai fights from a strong Muay Thai base, often fighting behind his kicks and working looping, heavy punches behind them. He likes utilizing leg kicks and front kicks to his opponent’s body to enter into range before firing off several punches. He moves quite smoothly for a heavyweight, and he manages range in the Octagon with his footwork. His offense is often patient, and he rarely overextends himself when firing off big shots. He likes to mix in knees to the body, as well, especially in clinch situations.

What to Look For in the Fight: Overeem represents Sakai’s most experienced UFC test yet, and even though the Brazilian has a pretty decent resume already, how he manages the Dutchman will likely come down to whether Overeem decides to implement more of the grappling that he’s utilized in recent fights. Sakai holds a brown belt in Brazilian jiu-jitsu, but he hasn’t been heavily tested off his back. Overeem has shown a willingness to grind out fights and impose himself physically, and he still holds fight-ending power. Both fighters are pretty patient with their offense and have decent gas tanks, so while the fight might start at a more methodical pace, the action should pick up as they make adjustments mid-fight.

What It Means: Ovince Saint Preux is as unorthodox a finisher as they come even though, at first glance, his style might appear rather straightforward. He is a long and methodical striker with heavy punches and a devastating head kick, and he knows how to set up those tools without expending unnecessary energy. His submission record is particularly notable, as four of his tap out wins have come by the Von Flue choke, most in the promotion’s history. It’s reason enough to keep a fight on the feet, but when OSP pulls the trigger, it’s a dangerous time for his opponent.

What It Means: Alonzo Menifield is a powerfully built, ultra-aggressive fighter who is always looking for the fight-ending strike. He throws heavy, looping punches that have real malice behind them. With that said, he sometimes rushes forward and into clinch situations that negate his natural power, but even in close, he can land Earth-shaking punches.

What to Look For in the Fight: Saint Preux is by far the most experienced and decorated opponent Menifield has faced thus far, so it should be a good test of the highly touted prospect following his first professional loss. Menifield often likes to get his work done inside of the first round, something that led to him wearing down a little in his loss to Devin Clark. Saint Preux, a methodical but always-dangerous fighter, might find success dragging Menifield into an early firefight while avoiding damage and extending the bout into the second and third rounds.

What It Means: With just three fights in the UFC, Viviane Araujo has put her speed, power and overall fun fight style on display. She has tricky, bouncy footwork that she likes to play with before exploding and entering the pocket with either counter shots or a combination. Even though she is often dancing on the outside, she is explosive in striking exchanges and has shown a speed advantage in her fights. She doesn’t get stagnant or repetitive with her timing, either, switching up her stances or her timing to catch her opponent off balance. Araujo is also an accomplished grappler and is dangerous when searching for submissions or stuffing takedowns, but she has shown a preference to stand and exchange on the feet. 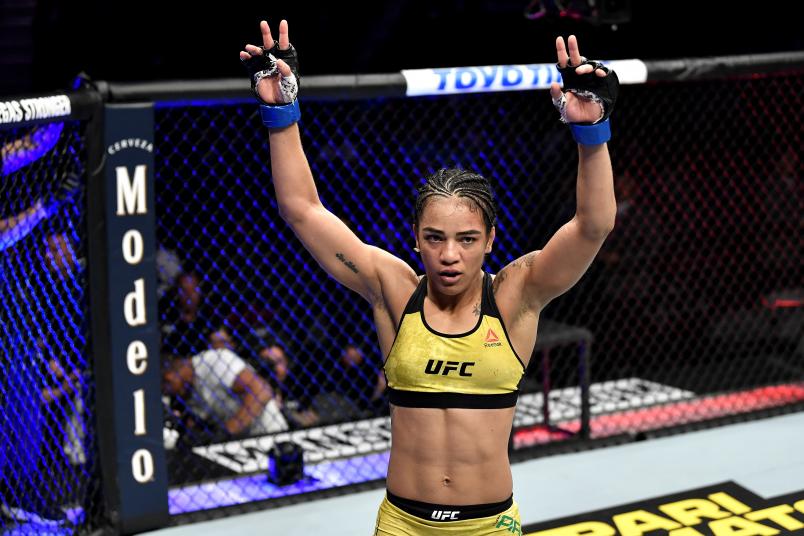 LAS VEGAS, NEVADA - DECEMBER 14: Viviane Araujo of Brazil celebrates the end of the round in her women's flyweight bout during the UFC 245 event at T-Mobile Arena on December 14, 2019 in Las Vegas, Nevada. (Photo by Jeff Bottari/Zuffa LLC)

LAS VEGAS, NEVADA - DECEMBER 14: Viviane Araujo of Brazil celebrates the end of the round in her women's flyweight bout during the UFC 245 event at T-Mobile Arena on December 14, 2019 in Las Vegas, Nevada. (Photo by Jeff Bottari/Zuffa LLC)

What It Means: While Montana De La Rosa has improved in mixing up striking into her game, her base and her bread-and-butter is her grappling. She is really slick both off her back and when she is in control on the top, and she has a tricky way of getting her opponent into a vulnerable position. She is strong in close quarters and has transitioned her wrestling background well into mixed martial arts. Lately, she has shown increased confidence in her striking with some pretty heavy hands and an ability to blend striking into her wrestling.

What to Look For in the Fight: Araujo is probably the more talented and natural striker between the two, and her speed and footwork could be problematic for De La Rosa, especially early in the fight. That said, Araujo has slowed down as fights drag into the second and third round, and if De La Rosa can get the fight to the ground – much easier said than done against Araujo – she could drain the Brazilian’s gas tank. Araujo hasn’t really been tested on the ground in terms of her submission defense, so if De La Rosa can drag her there, it’ll provide a good window into Araujo’s skills there. On the feet, though, the big question is going to be how De La Rosa manages the tricky and explosive Araujo as she dances on the outside.