This weekend, powerful light heavyweight contenders do battle in the first significant fight in the 205-pound division since Jon Jones vacated the title. While Jan Blachowicz and Dominick Reyes are slated to fight for the belt first, the headlining bout features a pair of fighters who could earn an inside track to the next title shot with a definitive performance on August 29.

Elsewhere on the card, welterweight veterans square off in a meaningful bout that could prove as a crossroads moment as they transition to the next stage of their career, and a hotly-anticipated rematch between up-and-coming light heavyweights finally goes down in a bout that has “banger” written all over it.

Check out the full card here

With these important matchups in mind, we dove into the numbers to see how these fights project to play out on fight night.

(All stats according to UFC’s Record Book as of August 26, 2020 and only include active athletes in their respective division unless noted otherwise)

What It Means: “Lionheart” is a well-rounded veteran fighter who immediately found a home when he moved up to the light heavyweight division a little more than two years ago. Since then, he is 4-2 with four finishes and has proven his power is very real up at 205 pounds. With his long and rangy frame at 6-foot-4, Smith can stalk his foe but fight equally as well moving around the outside of the Octagon waiting for his moment to throw a heavy overhand or string together a nice combination. He is a patient brawler willing to take one to give one.

What It Means: Rakic is an imposing physical presence at 6-foot-4 with a 78-inch reach, and he is an active striker who doesn’t often overextend himself looking for the finishing shot. His strikes land heavily, and he is relatively patient in how he chooses to pick apart his opponent. He utilizes his length and frame well to stave off attacks before pressing with his own offense. His strength really shows in clinch situations as well as when opponents shoot for a takedown on him.

What to Look For in the Fight: Anthony Smith has had success both leading the dance and also absorbing pressure from a more aggressive foe, but Aleskandar Rakic is also relatively methodical in his approach, knowing he can end the fight at any moment. Smith mixes things up more between the two and is a real jiu-jitsu black belt with a lengthy submission record, so Smith could look to take Rakic to the mat. Thus far, Rakic’s takedown defense has held up although it hasn’t been tested by the likes of Smith.

What It Means: A legendary brawler, few fighters have a more fitting nickname that “Ruthless” Robbie Lawler. The former welterweight champion has made a career off his aggressive style and fight-ending power. If he smells a finish, he swarms his opponent, and when Lawler is at his best, he is stalking his opponent and keeping the bout in a phone booth. Every punch he throws carries fight-ending power, and he also enjoys mixing up left high and body kicks as well.

What It Means: Magny is tall and long for the division at 6-foot-3 with an 80-inch reach, and he uses that frame to keep opponents at a range where he can pick them apart with rangy and precise strikes. He is also effective in the clinch and on the ground, grinding his opponents up against the fence, mixing in takedowns to go along with a variety of strikes. That combination of range and quality in the grappling department is often effective in negating his opponent’s offense.

What to Look For in the Fight: Magny has looked as good as ever in his last couple fights, shutting down any sort of attack from his opponents, but if Lawler gets back to his usual, pressure-forward style, he always has a chance to change or end a fight with his power. Something to pay attention to is at what range the fight is taking place. At distance, Magny has the advantage. In boxing range, Lawler has more power. In the clinch and against the fence, it could be a wash if Lawler’s takedown defense holds up. 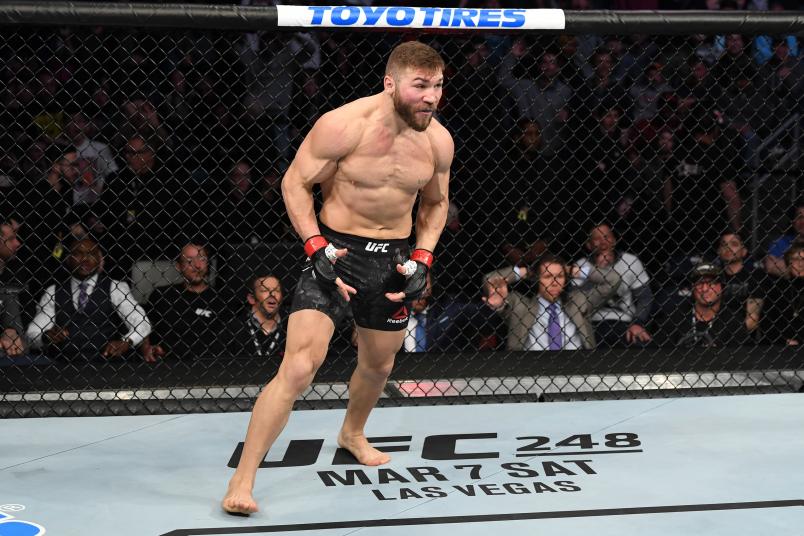 Ion Cutelaba reacts after referee Kevin MacDonald stops the fight against Magomed Ankalaev in their light heavyweight bout during the UFC Fight Night event at Chartway Arena on February 29, 2020 in Norfolk, Virginia. (Photo by Josh Hedges/Zuffa LLC via Ge

What It Means: Cutelaba is an ultra-aggressive fighter who is always waiting to unload the big, fight-ending punch. He doesn’t just wait for that window, though. Instead, he likes to swarm his opponent and keep the pressure on with strikes. His takedown defense is solid, and he is strong at close range against the fence as well. He wants to set a hellacious pace, and when he smells a finish, he unloads a barrage of punches and elbows. 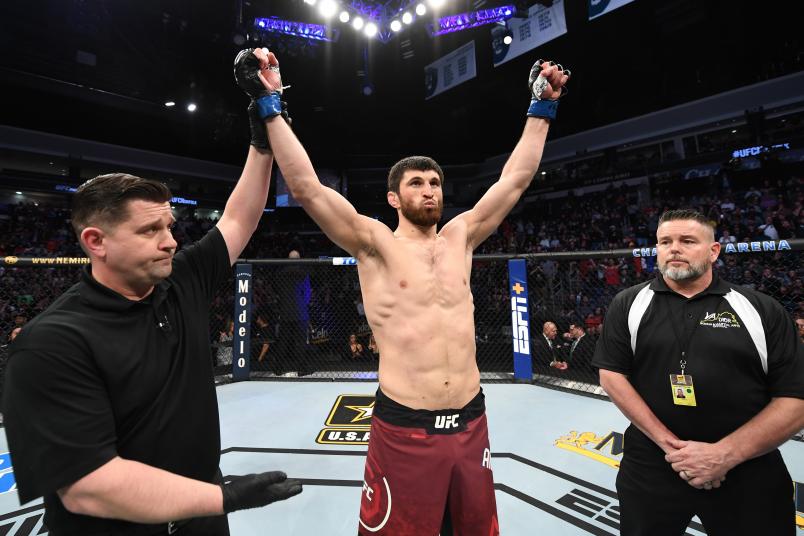 Magomed Ankalaev reacts after being declared winner by knockout against Ion Cutelaba by referee Kevin MacDonald in their light heavyweight bout during the UFC Fight Night event at Chartway Arena on February 29, 2020 in Norfolk, Virginia. (Photo by Josh He

What It Means: Ankalaev is a bit of a technician when it comes to his striking, and he is precise in his attack. That accuracy, aided by his power, is what often leaves his opponents stumbling as Ankalaev moves in for a finish. He has a diverse attack, mixing in front kicks and rangy attacks to mute any countering offense from him opponent. If he decides to mix things up and take the fight to the ground, he has good top control and pressure, which helps him wear on his opponents.

What to Look For in the Fight: This rematch in waiting has been stewing from the moment their February bout was controversially halted in Norfolk. It was already a spicy bout the first time around, and given the anticipation and postponements, it should be more of the same in the second fight. Cutelaba will likely try to swarm Ankalaev, but Ankalaev showed he is adept at shifting and throwing his own powerful shot before Cutelaba connects with a winging, wild punch. Seeing as the first fight only lasted 40 seconds, it’ll be interesting if any adjustments can be made. If the fight does go a bit longer, how the two decide to mix in grappling between their striking exchanges is a wrinkle in how these two match up.