Take A Deep Dive Into The Key Stats Of Some Of The Biggest Match-Ups At UFC Fight Night: The Korean Zombie vs Dan Ige
By Zac Pacleb, on Twitter @ZacPacleb • Jun. 17, 2021

(All stats according to UFC’s Record Book and Fight Metric as of June 17, 2021, and only include active athletes in their respective division unless noted otherwise) 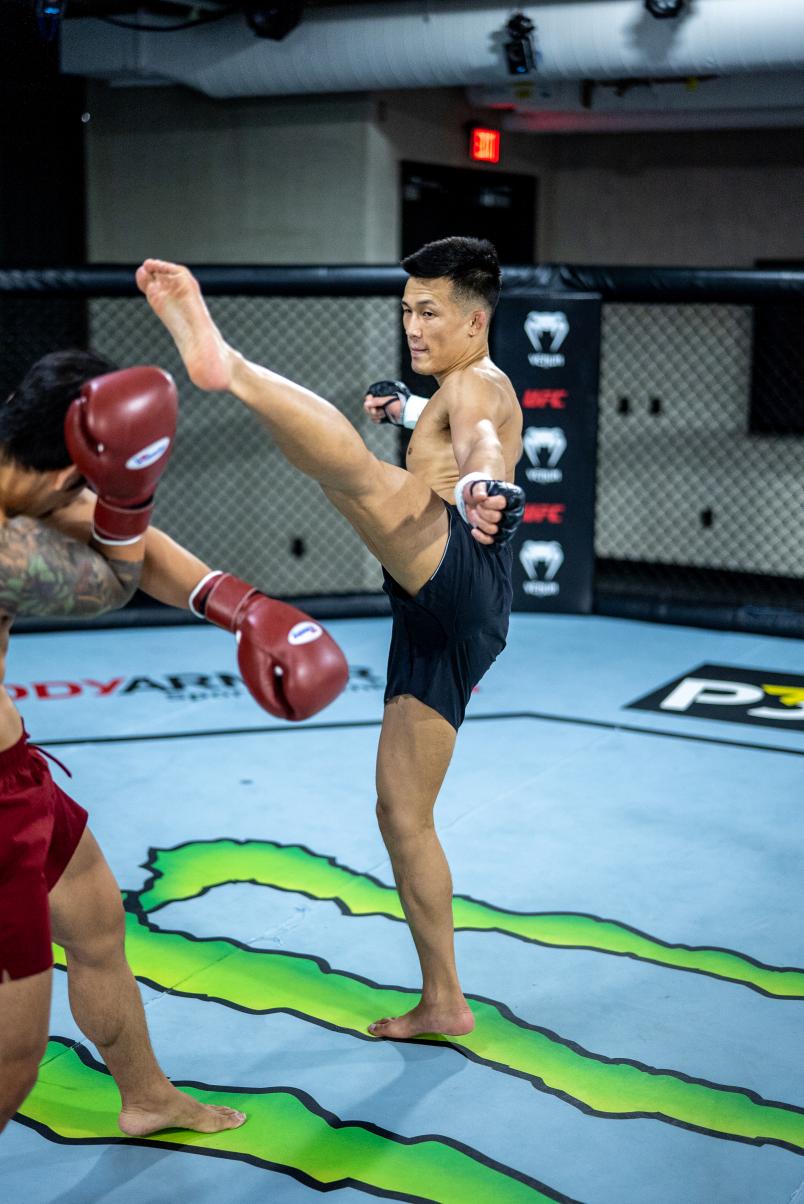 What It Means: “The Korean Zombie” is a definitive all-action fighter, one who is always moving forward and engaging in brawls. His striking, always powerful and fierce, has become increasingly cleaner the more he has worked with Eddie Cha. Jung is much more patient and composed in firefights than most fighters, with keen finishing instincts. He is instinctive in his counterstriking and mixes his attacks up well enough to keep opponents honest. On the ground, he has some slick submissions and is strong in the clinch, but he is at his best when dictating the exchanges on the feet.

What It Means: Ige is a well-rounded fighter whose overall skillset is perhaps greater than its individual parts. Talented and fundamentally sound everywhere, Ige isn’t a standout striker or wrestler, but his ability to blend the two and present danger everywhere in the fight allows him to make the most of his fight IQ and tenacity. His boxing has gone from slightly wild to much tighter and smoother each time out, and his wrestling ability helps him keep opponents off-kilter in the fight. He is remarkably tough and composed, which allows him to welcome brawls as they come.

What to Look For in the Fight: Ige is the better grappler of the two, or at the very least uses his grappling more often in fights, so that could be his avenue to early success. However, Jung’s defensive wrestling is strong, and he has a knack for finding a short punch as opponents try to enter on a shot. If the fight stays on the feet, Ige has shown a real drive and pace when he wants to pour on pressure, and he’s unafraid of absorbing a shot to land the right one himself. This fight could turn into a methodical kind of brawl with each fighter showing patience before unloading a combination which the other will answer with their own flurry. 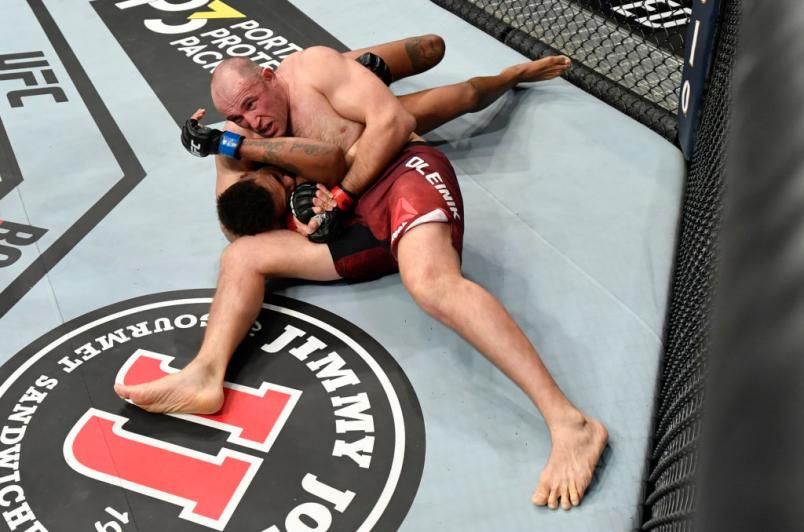 What It Means: Oleinik is an incredibly experienced fighter with a quirky, but lethal, grappling style that makes him one of, if not the most, dangerous submission artists in the heavyweight division. On the feet, he sort of plods forward and loads up on big punches, particularly with an overhand right, but in a way, it’s a means to an end. He wants to get his hands on his opponent, and his supernatural grip strength and squeeze puts his foes in danger as soon as the fight gets in those close quarters. His Ezekiel choke is one of the more confusing and yet effective techniques he utilizes, and at times it catches opponents off-guard. 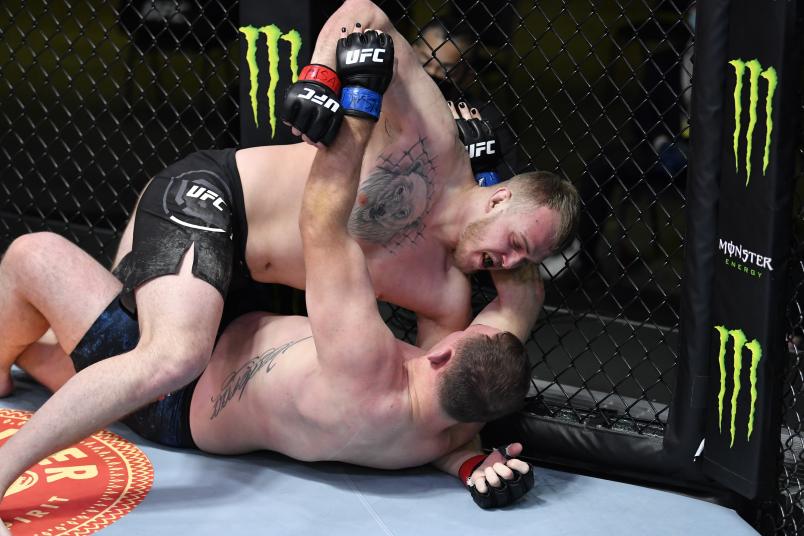 Serghei Spivac of the Ukraine punches Jared Vanderaa in a heavyweight bout during the UFC Fight Night event at UFC APEX on February 20, 2021 in Las Vegas, Nevada. (Photo by Chris Unger/Zuffa LLC)

What It Means: Spivac has shown a pretty well-rounded skill set in five UFC fights, and although he does hold power, his ability comes in grappling. He is a fundamentally sound wrestler with good submission skills, and he exhibits patience in those spots, leaning on his top-control to keep the fight where he wants it. He is a physically strong fighter who uses that size and strength to his advantage, and it informs the way he is able to open windows to finish a fight on the ground as well.

What to Look For in the Fight: More than likely, this fight is going to hit the canvas quickly. It’s a good test for Spivac, who has found most of his success in close-quarters and has shown strong top control thus far in his career. Of course, Oleinik is a unique challenge given his at-times peculiar style of grappling and finding submissions. He has great short-range physical strength which allows him to manipulate different positions, as well, so if Spivac isn’t mindful in each transition, he could find himself getting swept and put in danger rather quickly.

Other Fights to Watch (Marlon Vera vs Davey Grant) 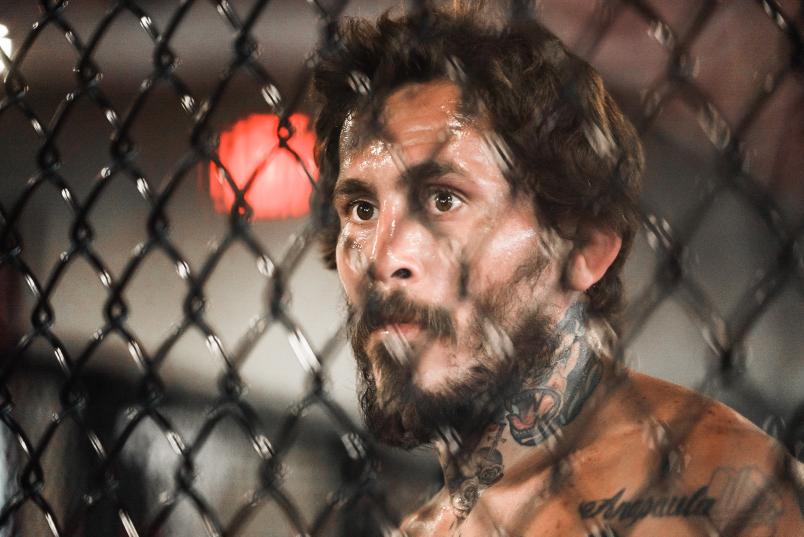 What It Means: “Chito” Vera is a skilled, swaggering fighter who is a real threat wherever the fight goes. His striking is polished and makes the most of his wiry frame. He’ll often mix up a variety of kicks to the legs and body, smartly using a front kick to his opponent’s body to keep range and punish their midsection. Additionally, his hands are pretty smooth, but his best strength is his sick ground game. He has a knack for finding the right moment to pounce on his opponent’s back, sink in hooks and start attacking the neck. He can roll into other submissions, as well, but more than anything, Vera is a finisher and will throw himself into a window of opportunity when it is presented.

What It Means: Grant is a scrapper with fast, powerful hands and a love for a firefight. The Englishman does well to mix up his targets with his hands, and he can string together smooth and powerful combinations on the feet. He likes to switch stances and throw a couple punches off the switch, but from distance, he’ll throw a variety of kicks to his opponent’s body. His two-punch combinations are fast and powerful, and he wings them out of both stances, and if the fight hits the ground, Grant is even more comfortable and exhibits good skills on the mat.

What to Look For in the Fight: Between the two, Vera is the cleaner and more technically proficient fighter on the feet. On the ground, it’s a little closer, even though Vera has the more expansive submission record. That said, they both like going back and forth on the feet and throwing teep kicks to the body to manage distance and timing. Grant might be the more dangerous striker in terms of one-shot power, but Vera makes the most of his windows of opportunity, as well. It’s a fight almost guaranteed to end before the three rounds are up, but where it finishes is the biggest question mark.