(All stats according to UFC’s Record Book and Fight Metric as of June 9, 2022, and only include active athletes in their respective division unless noted otherwise)

What It Means: After spending the first 16 years of his professional career as a knockout artist, Glover Teixeira reconstructed himself as a suffocating pressure fighter with a powerful wrestling and submission game. He still carries power in his hands, which he carries high and tight in a good fundamental boxing stance. He does well to mix in level changes and feints to overload his opponent’s defense and has heavy hooks and uppercuts in close. If he can get into his opponent’s legs, Teixeira is smart about staying heavy on top and working his way to a submission or dealing punishing ground-and-pound.

What It Means: Jiri Prochazka is a wildly technical fighter although the techniques are a bit unorthodox and jarring. Prochazka is long at 6-foot-3 with an 80-inch reach, and he utilizes a combination of explosive athleticism and smart footwork to swarm his opponent. His striking flow is peculiar, and he makes big movements to set up strikes, such as when he ducks his head to feint a low attack so he can throw a big uppercut if his opponent matches his levels. Prochazka carries his hands low, which, combined with his pressure-forward style, leads to firefights. He has a good enough ground game and explodes well when he sprawls to avoid a takedown.

What to Look For in the Fight: It’s hard to predict what a fight including Prochazka might look like, but the Czech will likely be wary of overextending himself and giving Teixeira a chance to get a takedown. However, Prochazka is also going to express himself fully in a fight, which means he will swing big, quirky shots that can put Teixiera out if they connect. The champion is ultra-durable, though, and he is undeterred from awkward attacks as he walks opponents down to the fence. Teixiera will have plenty of chances to crack Prochazka with his own strikes, as well, especially if Prochazka gets out of position defensively. On the ground, Teixeira has the clear advantage, so that remains his path of least resistance. 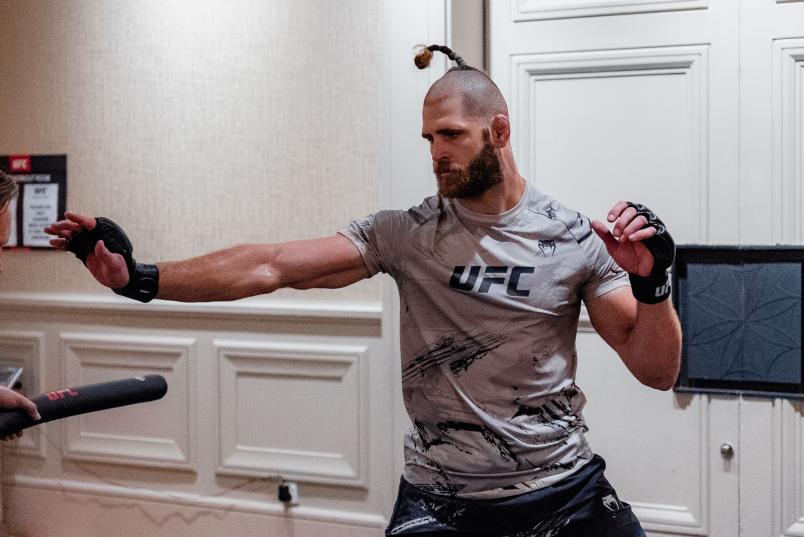 What It Means: A Valentina Shevchenko fight week often turns into a celebration of the champion’s martial arts brilliance, and the flowers are well-earned. Her Muay Thai is sinisterly vicious, and she thrives when her opponents press forward and leave open opportunities for counter shots. Shevchenko’s spinning kick counter is devastating, and she will fire off multi-strike combinations off an opponent’s miss. She is explosive in the clinch with knees, elbows and throws. If she gets on top of her opponent on the ground, she is very patient as she works her way through her opponent’s guard. 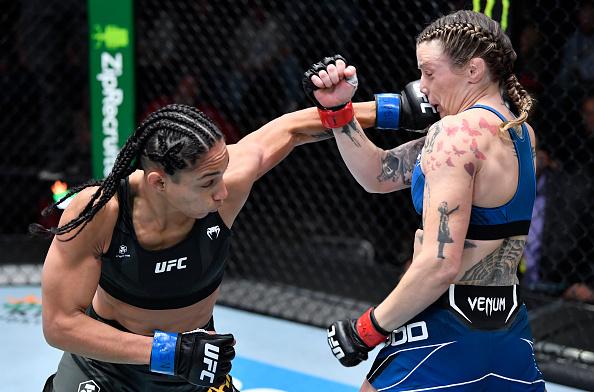 Taila Santos of Brazil punches Joanne Wood of Scotland in a flyweight fight during the UFC Fight Night event at UFC APEX on November 20, 2021 in Las Vegas, Nevada. (Photo by Chris Unger/Zuffa LLC)

What It Means: Santos is an imposing presence with powerful striking and a suffocating grappling game. She doesn’t give opponents any real room to breathe, and she has one-shot power in both hands. Santos does a good job of using front kicks to her opponent’s body from distance, and she can build offense well off that strike. He her hands are clean and fast, and her best punches come straight down the pipe. She has a good headiness about her in grappling scrambles, as well, and she can lock up a submission quickly.

What to Look For in the Fight: Santos is perhaps the strongest and most explosive challenger to threaten Shevchenko’s reign, but the champion has made a habit of nullifying anything her opponent does well. Shevchenko likes to take a step back in the first round and make reads, so that’s likely where Santos can find the most success. She has the power and submission skills to get Shevchenko’s attention, but Shevchenko’s speed and overall Fight IQ often makes a fool out of a slightly imprecise attack. Santos must be on her absolute A-game to find her windows of opportunity. 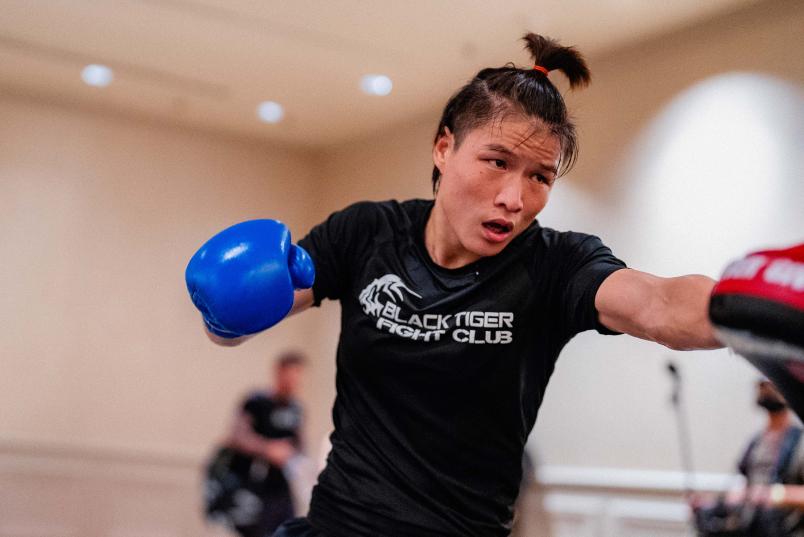 What It Means: “Magnum” is a ferocious, powerful presence at strawweight. Her Sanda-based striking shows itself in her explosive combinations and variety of spinning, side and roundhouse kicks. She is a smooth and bouncy athlete who puts everything in her strikes with the conditioning that ensures her ability to do that for an entire fight. She is sturdy in clinches and has improved her wrestling abilities over time. Zhang sometimes just follows her opponent as she pressures forward, but her footwork has improved as well.

What It Means: The former strawweight queen is a vicious Muay Thai specialist whose speed, jab and leg kicks have given opponents fits for years. She can often overwhelm slower opponents with a lesser sense of range and rhythm, and on the front foot, she mixes her weapons beautifully. Jędrzejczyk is quick to either sprawl or get underhooks on her opponent if they shoot for a takedown, and then it’s right back to a high-volume striking attack.

What to Look For in the Fight: After putting on the best fight of 2020 and one of the best title fights full-stop, Jędrzejczyk and Zhang will be hard-pressed to match that effort. Jędrzejczyk succeeded in their first fight when she led the striking exchanges, but Zhang rocked her several times at the end of their time in the pocket. Zhang’s attack is more varied, now that her wrestling is improved, so mixing that element in will introduce a new aspect to the bout. Jędrzejczyk might be able to lead Zhang into some strikes now that she has a better understanding of Zhang’s power, but with 10 less minutes with which to work, the pace of the fight might actually be greater than their first bout.

What It Means: “All In” is a talented grappler with improved striking, and he’s a fighter who seems to be in constant forward motion. He has good power in his hands, and he throws heavy body kicks. His bread-and-butter is his grappling game, and Allen displays slick skills off his back, as well as along the fence when controlling a clinch.

What It Means: Malkoun is an absolute grinder. The Aussie’s goal is to get involved in wrestling exchanges, take his opponent down and pummel him into submission. Malkoun has some power in his hands, but it’s mainly to take his opponent’s focus away from defending his takedowns. His chain wrestling is smart, and even if his foe gets back to their feet, Malkoun is riding them the whole way and wearing them down.

What to Look For in the Fight: Allen is probably the more talented striker of the two, but given his jiu jitsu skills, Malkoun might be able to get Allen comfortable with accepting a takedown early. From there, it’ll be up to Allen to threaten submissions and sweeps from bottom while Malkoun controls things from the top.