Here's Some Significant Stats To Keep An Eye On Heading Into UFC 273: Volkanovski vs The Korean Zombie
By Zac Pacleb, on Twitter @ZacPacleb • Apr. 6, 2022

(All stats according to UFC’s Record Book and Fight Metric as of April 6, 2022, and only include active athletes in their respective division unless noted otherwise) 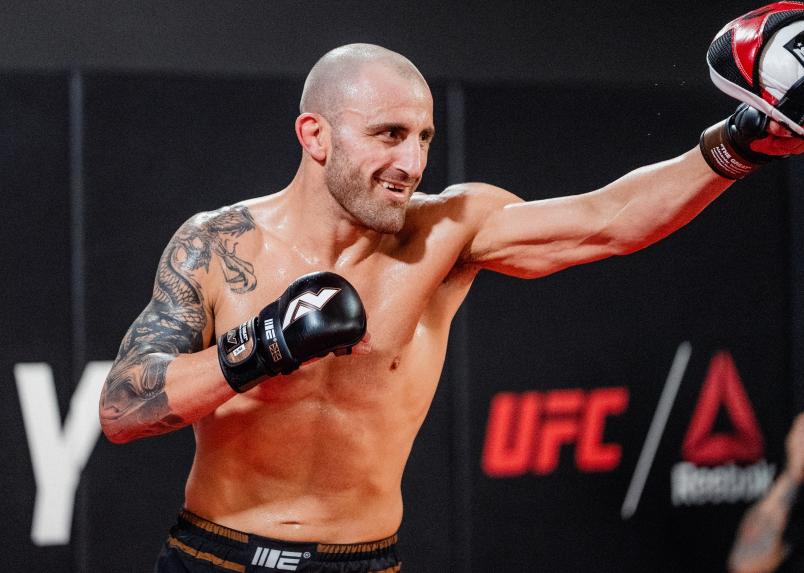 What It Means: “The Great” is one of the most high-level, well-rounded mixed martial artists on the roster, and he mixes all his skills together beautifully to create a bevy of problems for his opponents to worry about. On the feet, he is keen on his distance management, and he sometimes surprises opponents with his ability to get to them despite his 5-foot-6 frame. His 72-inch reach helps, but his kicking game is particularly important for his offense. He stays dedicated to low kicks and body kicks, and his check hook is well-educated. Volkanovski has steady wrestling and times his shots well, particularly at the end of rounds when things might be close. 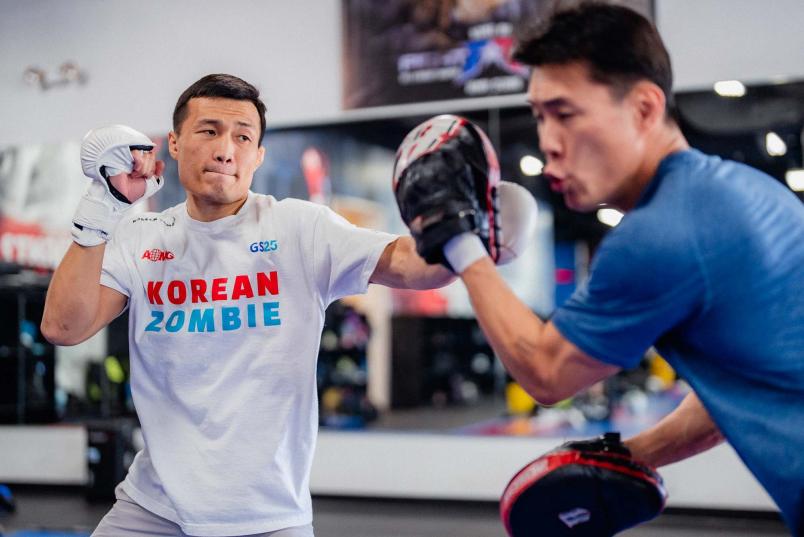 What It Means: “The Korean Zombie” is an all-action fan favorite who has developed into much more of a technical brawler of late who can mix in some grappling if needed. On the feet, he is heavy on his lead leg and carries his lead hand low, but he has great vision that allows him to slip and counter with devastating impact. Jung is particularly crafty with setting up his uppercut, and it might be his best punch. On the ground, he has shown a decently tricky submission game off his back, but he is most lethal when he is trading on the feet.

RELATED: The Korean Zombie Is Primed To Make History

What to Look For in the Fight: On paper, Volkanovski has more ways to win, particularly given his ability to mix up his attack with intelligence. Power is the great equalizer, however, and few have greater finishing instincts than The Korean Zombie. Because Jung is so heavy on his lead leg, Volkanovski might try to kick it early, but he needs to be wary of the counters coming back his way. The ways in which Volkanovski implements grappling is something to watch, as well as the ways in which he adjusts as the fight grows. Jung’s hooks and uppercut are going to be key to his attack when Volkanovski gets close, particularly if he’s looking to shoot for a takedown. 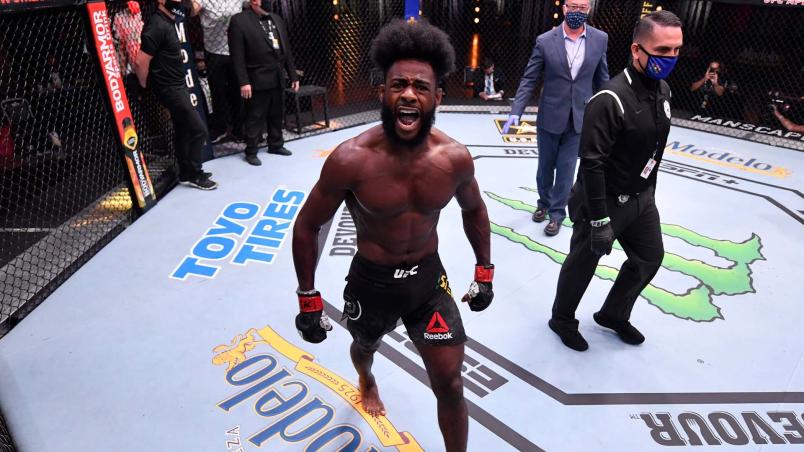 What It Means: Sterling is a rangy, slick fighter with suffocating grappling when he can get his hands on someone. He’s tricky and crafty with the ways he feints for takedowns to open strikes and vice versa, and if he can get to his opponent’s back, it takes a herculean effort to shake him off and prevent a submission attempt. Working off a high pace, Sterling likes to overwhelm opponents and fight on the front foot. His body kicks and low kicks are his solid base from which he builds his striking offense, and he stays disciplined with long and rangy punches.

What It Means: A particularly malicious fighter, Yan has an eeriness about him when he is in the Octagon. Early in fights, he often sits back and makes reads while staying defensively sound. Late in the round, he might open up, but it often doesn’t happen until after the first frame. Yan’s boxing is incredibly proficient from both stances, and when he sits down on a cross, he almost always rattles his opponent. Yan’s compact frame hides his great physical strength and explosiveness, but it shows in grappling scrambles, and he has some smooth transitions and reversals when opponents shoot in on him.

What to Look For in the Fight: In their first fight, Sterling started quickly, if not frantic, but Yan started to turn the tide heavily in his favor as the fight wore on, per his habit. Most had it going Yan’s way before the illegal blow that ended the night and sparked our current saga, and in the rematch, the adjustments are crucial. Sterling admitted to feeling flat on the day, so he might come out more steadily and cleaner to start. Whether Yan attempts to get off to a faster start himself is up in the air. He has the fight-ending power and the grappling game to give Sterling fits if Sterling isn’t mindful, but when “Funk Master” is on his game, he is lightning-quick when he fishes for submissions. Pace and pressure is probably the key from the outside, but Yan’s striking prowess is the biggest separation point between the two. 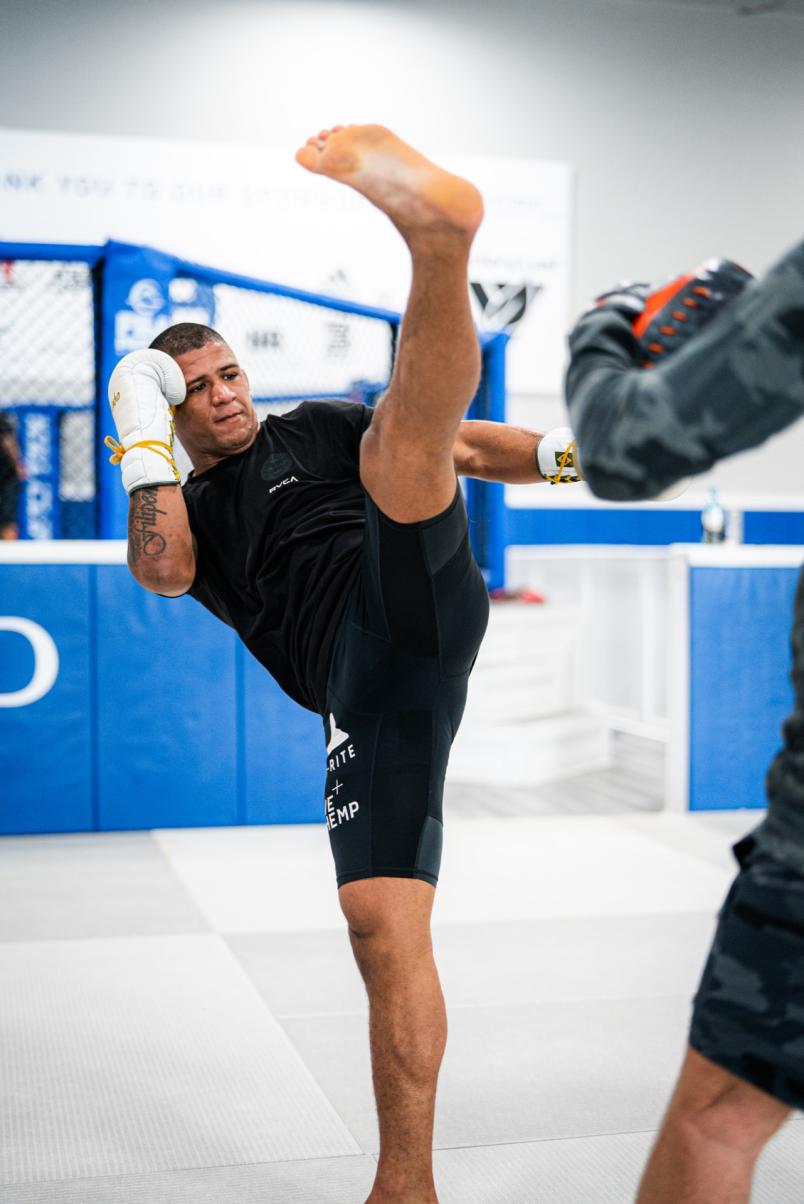 What It Means: “Durinho” is a powerful, vicious fighter built like a fire hydrant with savant-like skills on the ground. His jiu jitsu and grappling being the level they are, he can often throw without much concern of getting taken down, so he is able to sit down on punches with impactful results. His overhands and hooks are his best punches, and he also strings punches together well when he starts with knees and kicks. He also has a heavy leg kick when at range.

What It Means: On one of the most explosive ascents we’ve seen in recent memory, Khamzat Chimaev hasn’t given UFC fans a whole lot to see in terms of what he can do in the Octagon because he simply has steamrolled each of his opponents. Almost every fight has consisted of “Borz” blasting through on a takedown, mauling his opponent with ground-and-pound before fishing for a submission with a stunning quickness. He has one-punch power, and he doesn’t seem to need to wing wild punches to wield it.

What to Look For in the Fight: Burns represents Chimaev’s toughest test by far, and it’s expected that we’ll learn more about Chimaev in this fight than we have in his entire UFC career. Burns has the jiu jitsu game to nullify Chimaev’s freestyle wrestling on paper, and Burns has power that can hurt anyone in the division. Chimaev is likely going to shoot for a takedown early, which will reveal a lot. If he can take him down, Chimaev will have to navigate Burns’ active guard, but if they stand and trade at first, we haven’t really seen Chimaev go backwards in a fight just yet. Burns could time a knee and low kick to great impact if thrown right, but Chimaev will have the size and reach advantage to connect with long, looping shots when they’re at distance. 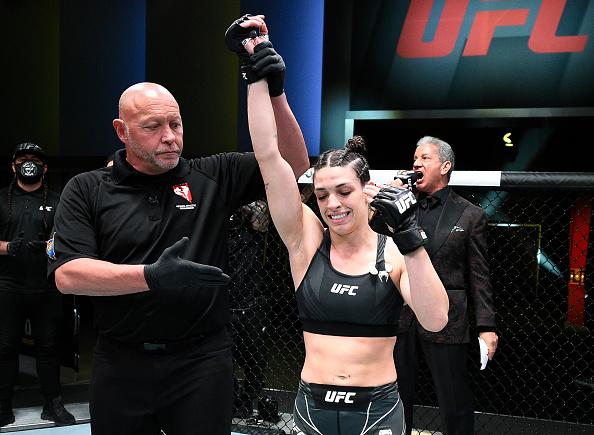 What It Means: Dern is an absolute wizard on the ground and one of the most decorated jiu jitsu practitioners on the roster today, and perhaps ever. If the fight hits the ground, she’s going to throw multiple submissions and more often than not, get the tap. It can create a bit of a hurried approach from her opponents when clinches happen, and her straight-up wrestling has improved, as well. On the feet, her striking has improved, but she still prefers to wing heavy punches over a technical approach. 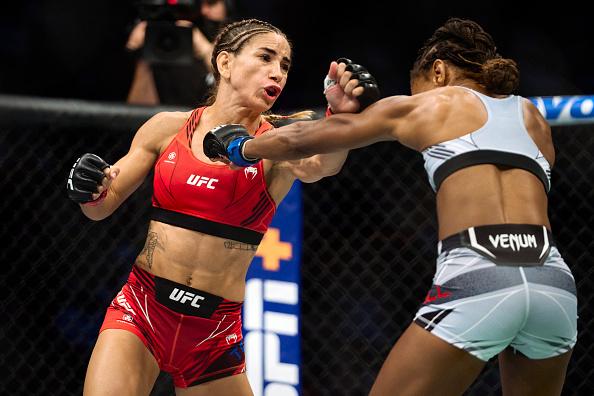 What It Means: The “Tiny Tornado” has a strong taekwondo base, and her strikes often come in flurries that earned her the moniker. Laterally, Torres moves smoothly and manages range well with kicks, particularly a front-leg side kick. She has great physical strength in clinches and makes it pretty tough for opponents to catch any sort of rhythm against her.

What to Look For in the Fight: Plainly, this fight comes down to Tecia Torres keeping the fight upright and thwarting Dern in grappling situations. Torres is physically very strong and has a high Fight IQ, so her distance management will be on point. How Dern navigates Torres’ long-range attacks like the side kicks and body kicks is key, and whether she uses those as entries into takedowns is something to note.