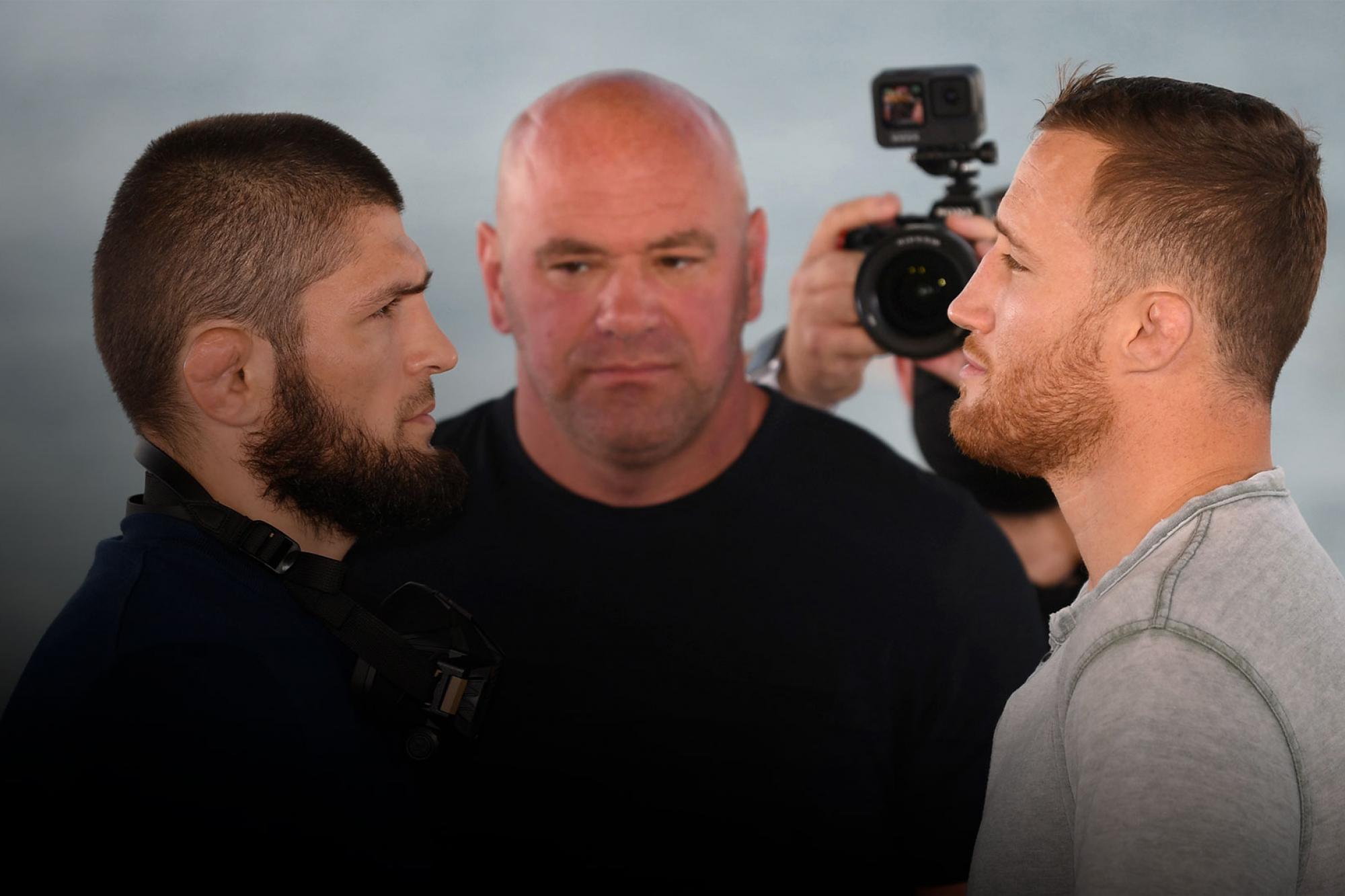 The UFC’s second 2020 stint on Fight Island comes to its epic conclusion this weekend as Khabib Nurmagomedov goes for another dismantling performance against the sport’s most excitingly violent man in Justin Gaethje.

A clash between top middleweight contenders slots in as the UFC 254 co-main event as former champion Robert Whittaker looks to get on the inside track to challenge Israel Adesanya once again while fast-rising Jared Cannonier seeks out his signature win in just his fourth fight at 185 pounds. Elsewhere on the card, a pivotal heavyweight matchup goes down featuring striking styles that are starkly contrasting yet devastating all the same, and two bantamweight prospects duke it out on the brink of the top 15.

With crucial matchups to be had throughout, we took a deep dive into the stats of each fighter to see what tendencies could come to key fruition inside the Octagon.

(All stats according to UFC’s Record Book and Fight Metric as of October 21, 2020, and only include active athletes in their respective division unless noted otherwise)

What It Means: A testament to Nurmagomedov’s greatness is that every single one of his fights looks virtually the same. He patiently stalks his opponent before exploding to close the distance, he gets a hold of a leg and begins grappling sequences that often swallow up his foe. He’s become more adept at taking shots in better moments, mostly when he backs his opponent against the fence. From there, he switches from single and double-leg attacks, and once the fight is on the ground, he’ll tie up the opposition’s legs and unleash his heavy ground-and-pound attack. Even when opponents explode and attempt to escape, he is relentless in adjusting and attacking somewhere new to get the fight down to the mat. His standup is improved as well, but it’s a means to a grounded end.

What It Means: The most exciting fighter in the sport holds that title because he is so willing and able to engage in firefights knowing he carries the bigger bombs. As of late, Gaethje has been more methodical and measured in his approach, which still makes him a busier striker than most on the roster. His boxing is clean, featuring smart, range-finding straight punches to set up his tight hooks and uppercuts. His best strikes might be his leg kicks. They come fast and frequently. He has also shown solid defensive wrestling stemming from his All-American pedigree.

What to Look For in the Fight: Nurmagomedov is going to shoot for a takedown, and that means we’ll see Gaethje wrestle the most he probably has since his college days as an actual wrestler. Gaethje is confident he’ll force Nurmagomedov to go through much more fire than he is accustomed in an attempt to get to Gaethje’s legs, and whether that means “The Highlight” is confident in his defensive ability or that he plans to lean on great footwork and counterstriking on Nurmagomedov’s shots is yet to be seen. Gaethje has shown the freakish power that only needs a small window to end fights, but Nurmagomedov has swallowed up everyone in his path regardless of their speed or power.

MORE UFC 254: Fight by Fight Preview | Fighters On The Rise | Where We Stand: Lightweights

What It Means: Whittaker is one of the faster middleweights on the feet while also carrying real power at 185 pounds. His lead hand is sneaky and swift on both jabs and hooks, often coming out of his opponent’s line of sight because he carries it so low. He makes good use of a varied leg attack, from conventional kicks to the oblique-style stomp Jon Jones employs. He also has a solid wrestling base that allows him to keep his opponent honest and on their toes if the fight gets stale on the feet. He is technically sound, but he does love to engage furiously in the pocket.

What It Means: Cannonier is a stalking presence in the Octagon, often walking forward and absorbing some damage without flinching much at all while he waits for his opportunity. His kicking game is clean and sneaky, and his leg kicks are especially heavy. His long reach (77.5-inches on his 5-foot-11 frame) stays tight and high until he unleashes bombs. His power is evident in big looping punches as well as short and tight ones. In the clinch, Cannonier is strong and can utilize that strength to reverse positions or find an advantageous one.

What to Look For in the Fight: Both fighters have shown an ability to patiently find their ways to implement their offense to devastating impact in the past, but as this fight provides just three rounds to work with, the sense of urgency in the first round could be high. Cannonier is the more straightforward of the two fighters in terms of angles taken, and he does a good job cutting off his opponent. Whittaker is probably the faster and more agile of the two and is strong in his ability to dart in and out of range quickly. How much of this fight occurs in grappling exchanges could be pivotal as well - Whittaker is the most proven wrestler, but Cannonier’s overall strength gives a lot of problems.

What It Means: The Russian is a towering figure at 6-foot-7 with an 80-inch reach, and he makes good on those advantages with a decently high-paced, rangy attack. He mixes in roundhouse and teep kicks well, and his punching combinations are fast and long. His footwork allows him to manage distance relatively well and stave off smaller opponents winging looping punches. He is measured and accurate in his striking, as well, taking his time in breaking his foe down before looking for the home run shot.

What It Means: Harris is a fast and powerful knockout artist who often gets his work done in the first round. His hands are smooth and quick when throwing combinations, and he mixes in punches to the body as well as the head, and his straight punches are accurate while still carrying fight-ending power. Laterally, he moves well and swiftly, cutting different angles and looking for a way to unleash his power. In clinch situations, Harris is strong and able to lean and impose himself on his opponent physically, showing solid technique in finding advantageous positions as well as windows for a big strike off the break.

What to Look For in the Fight: Watch for Harris to close the distance quickly and press Volkov against the cage before unleashing some boxing combinations early in the fight when he is at his most explosive. Volkov, however, is a little slippery because of his smooth footwork, and he manages distance well with jabs and kicks. Harris can throw a strong body kick from his southpaw stance, but his best work is done with his hands, even if he does engage first with a kick or jumping knee. Volkov likely wants this fight to stretch past the first round, when Harris does his best work.

What It Means: With a solid judo background, Kenney is confident and strong in clinch situations, especially against the fence, as his strength has increased with time in the bantamweight division. He is smart with his leverage and sneaky with submission attempts, and on the feet, he continues to show an improved blending of techniques. He is adept at switching stances, but from his base, he throws heavy body kicks, and he strings together punches off those kicks well. In the pocket, he likes to mix in body punches and quick, strong straight punches, as well. If an opponent presses forward with pressure, Kenney has shown a good sense of timing a takedown to break up the flow.

What It Means: Wood’s frame is really rangy, and he utilizes those long limbs to keep opponents at distance or to position himself to fire counters. He likes to double-up on varied kicks to the body, either roundhouse or front kicks, and then mixes punches off that well. He can also switch stances for tricky punching combinations when rushing forward. His fundamental boxing is solid, with tight hooks and body shots as well as a long cross available to him. On the ground, Wood is technically sound with an aggressive streak in looking for submissions. He doesn’t make things too complicated for himself and jumps on his opponent’s neck in a variety of ways and with frequency.

What to Look For in the Fight: These two bantamweight prospects match up well as both are relatively well-rounded, with Kenney having a bit more in the grappling department while Wood’s striking offerings have been a little more robust. If Wood stays disciplined in his attack, he should be able to keep Kenney at bay and lead the dance with his darting, long-ranged style striking. Kenney could have his own success in timing body kicks, leg kicks and finding Wood reaching in order to secure a takedown or engage in the clinch.