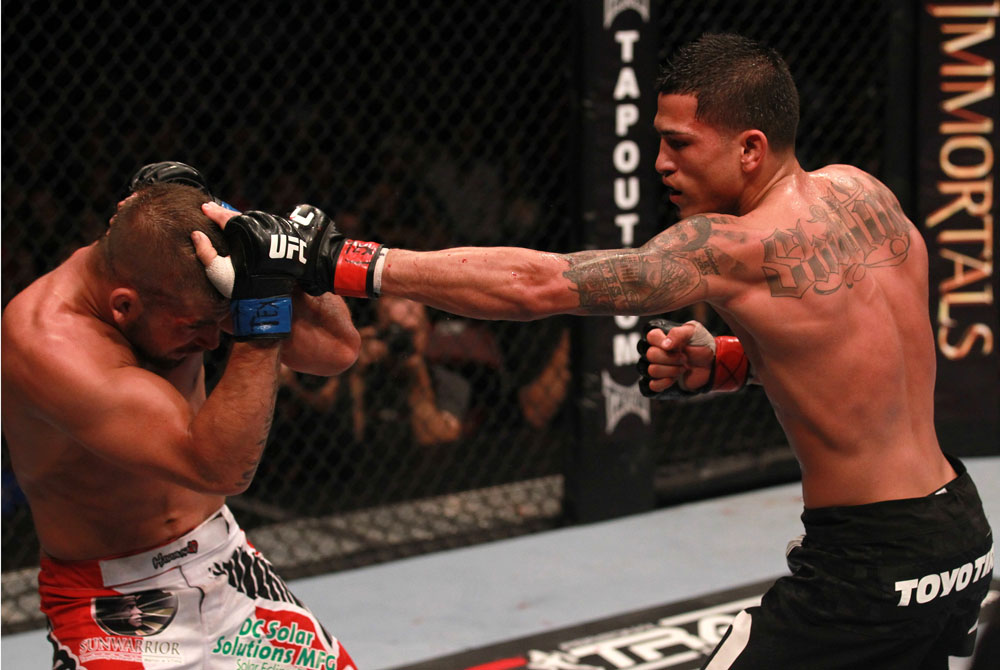 On December 16th, 2010, with one minute remaining in a hotly contested five round WEC lightweight championship bout that would also be the final fight of the company’s storied tenure, arguably the most sensational athletic move was attempted and successfully delivered: the ‘Showtime kick.’

After 24 minutes of back and forth action with the title on the line, then challenger Anthony Pettis seemingly defied all known laws of physics by leaping towards the cage, spring boarding off of that cage with his right foot, and delivering a mid-air whip kick with that same right foot, which caught then champion Benson Henderson in the face. It didn’t knock the champion out, but it did drop Henderson and was the declarative statement that Pettis won the epic contest.

About the only person in the entirety of the MMA community who is not still hypnotized by that captivating moment is the man who did it. “I don't want the ‘Showtime kick’ and the WEC belt to be the highlight of my career,” affirms Pettis, who understandably is working towards a long, successful career as a professional fighter, and not resting on his 23-year old self’s accomplishments - as great as they were. “I want to be the UFC champ. I want to do well in this and I believe in myself. I want to show the fans that I am a skillful fighter and I can be the best at 155.”

If UFC light heavyweight champion Jon Jones had the most impressive year in MMA history in 2011, then there’s a case to be made that Pettis had the second best in 2010. Coming off a split decision loss to Bart Palaszewski at WEC 45, which was also the first loss of his career, Pettis entered 2010 a relative no name 155er who found himself being followed around by a yet-to-debut documentary television show while preparing for his third WEC bout. At WEC 47 against Danny Castillo, Pettis scored an opening round head kick knockout, which earned him “Knockout of the Night” and provided a scintillating ending to the World of Jenks MTV show. But that was only the beginning to his year, as Pettis would win three more fights, a “Submission of the Night”, a “Knockout of the Night”, and was crowned the last WEC lightweight champion.

An added stipulation to the Pettis/Henderson bout was that the winner would face the winner of the UFC lightweight championship fight between Frankie Edgar and Gray Maynard at UFC 125. The title fight ended in a draw, which earned Edgar and Maynard a rematch with each other, but left Pettis without a dance partner for the foreseeable future. Instead of waiting for the eventual winner of Edgar/Maynard (which was finally decided last October), Pettis chose to take on another top contender. Long story short, six months later, Pettis debuted in the UFC against veteran grinder Clay “The Carpenter” Guida and suffered a unanimous decision loss.

“It sucked,” tells Pettis. “Going from fighting pretty much every two months to having six months off - I didn't like it at all. A lot of stuff changed. Having Mr. Andrew Jenks follow me around, my popularity definitely went up, and having six months off I didn't have anything to look forward to. My fight camp and I decided I should take a fight and luckily we did because I wouldn't have been fighting until this year. Taking that fight didn't turn out how I was hoping, but there were a lot of factors - time off, gameplan, and a lot of stuff factored into why I lost that fight.”

It wasn’t the UFC debut Pettis expected, but he is a professional, and four months later he was inside the Octagon for a second time looking for that first win. “The biggest thing for me was to not get another loss,” says Pettis, who took on the heavy-handed Jeremy Stephens at UFC 136, a bout which did not go as expected either. “Going into the Stephens fight, we were expecting a standup war. He was talking big stuff like he was going to knock me out and welcome me properly to the UFC, so I was expecting a standup fight. It didn't turn out that way.”

No one would have guessed the ultra, dynamic striking of Pettis and the 14 knockouts, power punching of “Lil’ Heathen” would end up in a wrestling match in Houston. “He goes and takes me down in the first round, twice I think, but I wasn't expecting him to shoot on me - I was expecting him to throw big bombs,” divulges Pettis, who didn’t start the grapple-thon, but definitely ended it by showing off his takedowns in the later rounds. “He takes me down and he goes up on the judges’ score cards right away. In the corner, Duke [Roufus] told me, ‘if you can take him down then take him down and grind him out.’ In the second and third round, I came out and I did just that.”

Although, 2011 was slow for the Milwaukee, Wisconsin native, going 1-1 in two wrestling matches in the UFC, 2012 is shaping up to be very exciting. At UFC 144, in the UFC’s first event in Japan in over a decade, Pettis faces five-time Submission of the Night winner Joe Lauzon at the Saitama Super Arena. The submission magician from Massachusetts is entering the bout on a two fight win streak capped off by a huge 47 second upset victory over Melvin Guillard at UFC 136. At 20-6, the Ultimate Fighter season 5 alum is in the mix for a title shot, and Pettis knows a win over him would put him back near the top of the lightweight pack hunting for gold.

“He’s a very intelligent fighter and very dangerous,” says Pettis. “He's got some good striking, he's getting better all the time, he's been around a long time, he's got the experience factor on me, and he's very good on the ground. He's one of those fighters who is dangerous everywhere. I wanted someone of his caliber and of his skill set. He's coming off a huge win against Guillard. He's going to put me right back where I need to be. A win over Lauzon will be huge for my career. Coming off of a win you have better mental preparation going into a fight. You're not doubting yourself, you're not thinking about your last loss. I'm coming off of a win, so I'm better mentally. I know that I can go out there and do what I usually do. I can't go out there and play it safe. I need to go out there and bring the fight and break his will.”

The type of fight that only “Showtime” can bring is a uniquely flashy, but effective, one that is fan-friendly and knockout-centric. It’s a style that is as atheistically pleasing as it is deadly for Pettis’ opponents. Nevertheless, Pettis fights with a controlled chaos, as seemingly high risk maneuvers like the ‘Showtime kick’ are actually thoughtfully practiced with legendary kickboxing coach Roufus, and they come naturally to Pettis because of his background in traditional martial arts like Taekwondo (3rd degree black belt).

For the training required to make himself elite, Pettis doesn’t even need to leave his hometown of Milwaukee because of Roufusport Mixed Martial Arts Academy. Within the hallowed walls are the gym’s namesake, Roufus, who is both head coach and striking coach, as well as a cast of steadily growing up-and-coming talent like UFC featherweight Erik Koch. One of the newest members of the fight team is the highly decorated, former 2x NCAA Division I National Champion wrestler from the University of Missouri, Ben Askren, who is 9-0 as a pro in MMA. Also, Pettis’ younger brother, Sergio, is a 3-0 flyweight on the Roufusport team.

“It's huge,” says Pettis about the motivation he gets from training with his brother. “For me and my brother training together we have a bond, we're both pushing each other to the limit because we want the best for each other, but we're competitive. I don't want to lose, and I don't want my little brother whooping my ass, so I have to stay on top of my game. I know he looks up to me, so I know I have to do the right things and set the right examples.”

Lastly, out of all the fans that he earned from the TV show, the exciting finishes, the kick, and the title, Pettis’ biggest fan didn’t get to see any of that happen because she’s only seven months old: his daughter Aria. “You hear it all the time that when you have kids that they're your ultimate motivation, but it doesn't really make sense until you have one and you see,” says Pettis, who is going to have to work harder than ever to outdo what he’s already done, but with his daughter in his corner he’s ready for the task. “I have a baby girl, she's amazing, and I'm more focused than ever.”

On February 25th at UFC 144, Pettis is bringing “Showtime” to Japan and Lauzon better be prepared for that arsenal of creativity. “I have a fight style that is different from everyone else’s and from what everyone has ever seen,” asserts Pettis, who wants to eclipse his previous WEC accomplishments and the best way to start doing that is a win over Lauzon. “I think coming out here and having a great performance shows that I'm one step closer to my goals. I've got the basics, I've got the flash, and I'm trying to be the most well-rounded fighter in the UFC.”

Who knows, maybe it's possible to jump off the cage into a flying triangle choke, back flip kick. If anyone is going to do it, Pettis can.