Short notice not a problem for Rivera in London 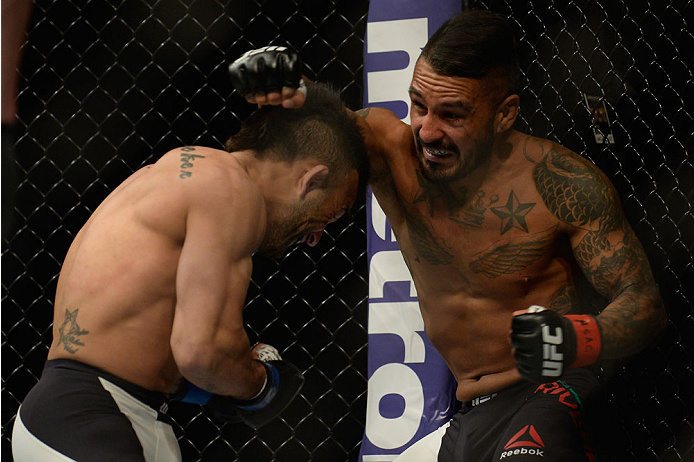 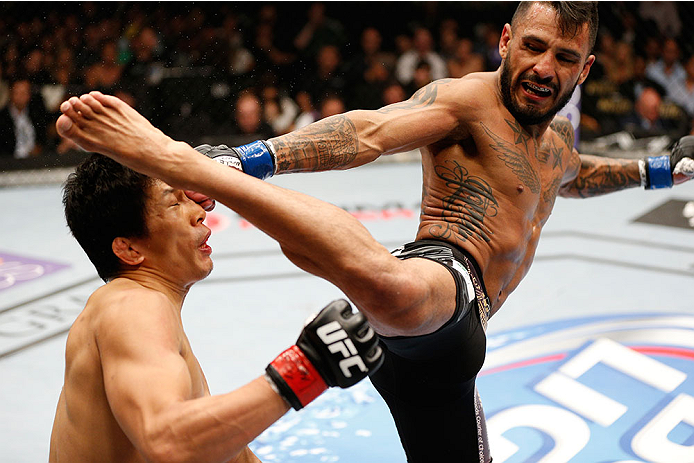 Francisco Rivera fights for the fans.

Whether against a former champion or an Octagon debutant, the bantamweight brawler from Buena Park, California is ready, willing and always able to go hunting for the knockout. Tipping the scales at only 135 pounds, Rivera’s hands are downright diabolical for someone his size, with five knockdowns and three knockouts in the UFC.

With that being said, when it was announced that Rivera would tangle with John Lineker at UFC 191, fight fans knew they were going to see something special. And they did.

“Once the fight happened, I got sucked into the brawl,” Rivera said. “We’re both the type of fighters who really like to bang and put on a show. And sometimes, game plans fly out the window and you say, ‘To hell with it!’ And you just start swinging until one of us knocks the other out. My game plan went out the window. If there’s a chance where I can let my hands go and just catch him - that’s what I was trying to do.”

On September 5, Rivera and Lineker compressed a three-round war into 128 seconds of mayhem and, rightfully so, they were awarded Fight of the Night honors. The dueling duo chucked a combined 96 significant strikes in those two minutes, which ended, surprisingly, with Lineker pulling guard and slapping on a guillotine choke. It was far from the most strategic decision Rivera could have made to have a swing-a-thon with Lineker, but Rivera doesn’t back down when things get wild and, sincerely, he wants to put on a memorable performance for the fans each and every time.
RELATED CONTENT: Francisco Rivera fighter bio | Matchup vs. Brad Pickett |

“Unfortunately, it didn’t go my way that night,” Rivera said. “It happened so fast. Looking back at the video, I was really upset because if I had followed the aspects of my game plan, I knew I could have beat that guy. After watching it, seeing how many times I hit him, he can take a punch. I was definitely surprised he didn’t go down. That was my mistake. I should have used my range and my height against him. I could have won that fight. I am happy that I got Fight of the Night or I would have really been hurt. Other than that, it was a mistake I made. Anything can happen in the fight, especially in a fight of that magnitude. With the type of fighters that me and Lineker are, we like to let our hands go and that happened. I am glad that the fans got to see one of the best rounds of the year.”

Owning an 11-5, 1 NC pro record, the 34-year-old “Cisco” was eager to get back inside the Octagon. While the Lineker fight was fun for the fans, Rivera wants to prove he’s more than that. The All in MMA and CSW-trained Rivera is still that calculated striker who tore up George Roop in 2013 and still has that dynamite power that he showed when he dropped and stopped Alex Caceres in 21 seconds last June.

More than anything though, Rivera wanted the chance to get back on the winning track and he got it, stepping in on short notice against Brad Pickett this Saturday in London.

“We were waiting for a fight to happen and waiting for [UFC matchmaker] Sean Shelby to call us soon, so we didn’t know the opponent, but we were expecting a fight soon,” Rivera said. “I had already jumped into camp a little before Henry Briones (Pickett’s original foe) had gotten hurt, so it was perfect timing. I knew a fight with Brad Pickett would be a fight for the fans. And getting to go to London to fight there, I’m really happy with that. Something I wanted to do was fight anywhere besides Las Vegas. I’m like 1 and 5 in Vegas. I think I’ve had enough of Vegas, so I didn’t really care where it was. But London is a great place and I always wanted to go there and now, I get to take my team there and get to fight for all the fans out there.”

Up next, Rivera collides with a four-time Fight of the Night winner in Pickett’s hometown. After going 1-2 in three close decisions as a UFC flyweight, the American Top Team product returned to 135 pounds to go blow-for-blow with undefeated knockout machine Thomas Almeida at UFC 189. The first round was vintage Pickett with hooks a plenty, but “One Punch” would get caught with an incredible flying knee from the Brazilian in the second period.

Both Rivera and Pickett cannot stop themselves from engaging in action-packed scraps, which is what makes this UFC FIGHT PASS battle a definite must-see.

“Pickett’s a veteran of the game,” Rivera said. “He’s been fighting for a long time. He’s fought top guys in every division he’s fought in. He dropped down to 125 and fought some of the top guys there and then came back to 135. Every fighter has moments in their fights where it’s close and things don’t always go your way, but for him to keep fighting the way he does no matter what happens, he’s definitely a great fighter. Both of us are always fighting tough guys and we’re both always fighting for the fans. I know we’re already contender for Fight of the Night, and he’s going to come forward every round or every chance he gets. I’m looking forward to putting on a show again and getting this win. Everybody knows me for my hands, so I’m always looking for the knockout and I’m always looking to let my hands go. And I’m ready to do it again against Brad Pickett.”