CINCINNATI, May 10 – Veteran middleweight Ed Herman got a big win when he needed it, as he bounced back from a 1-2 stretch to defeat Rafael Natal via unanimous decision in UFC Fight Night prelim action Saturday night at U.S. Bank Arena.

Natal’s kicks to the leg got Herman’s attention in rapid-fire fashion, with “Short Fuse” appearing to hurt his knee before getting taken to the mat by the Brazilian. While on the ground, Natal ripped off strikes, yet Herman kept his cool, got to his feet, and then scored a takedown of his own with a little over a minute left. Now it was Herman’s turn to unload with strikes, evening the score.

Herman was on target with his striking as the two stood in round two, leaving Natal to seek refuge on the mat two minutes in. Herman stayed busy from the bottom position, but Natal’s lack of activity prompted a restart from referee Jerry Krzys with two minutes remaining. Herman continued to have success though, keeping the strikes coming at close range against the fence.

Like a wily veteran who knows all the tricks, Herman patiently stalked Natal in the third, cutting his opponent on the forehead while avoiding all his takedown attempts. And when the two did lock up, it was all Herman, wrapping up a win for the Ultimate Fighter 3 finalist.

Flyweight looks like a good fit for former bantamweight Kyoji Horiguchi, as he pounded out a three round unanimous decision over Darrell Montague.

After some ineffective striking by both men, Montague changed the location of the fight with a 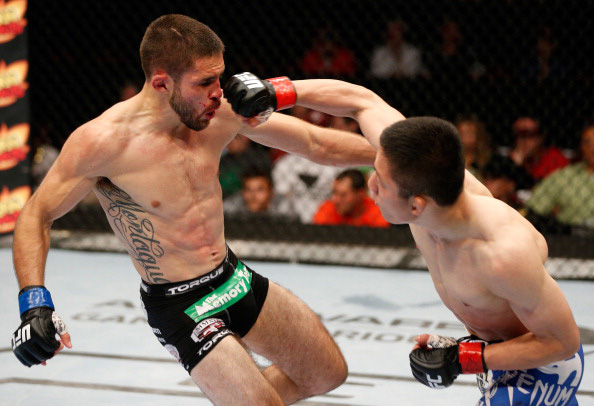 takedown two minutes into the bout. Horiguchi didn’t stay there long, rising to his feet, where he attempted to catch his opponent napping, but it just wasn’t happening.

Montague looked to finish as soon as the second round started, locking up two submissions that Horiguchi was able to break free from. The Tokyo native tried to get even on the scorecards with a couple fast flurries, but Montague’s defense was air tight and his movement kept his opponent from getting set. As the round reached its midway point, Horiguchi began to find his range, and when a knee dropped Montague, the end appeared to be near. The Californian was able to survive the ensuing assault, but it looked like a new fight at this point, with Horiguchi’s striking doing plenty of damage, sending his foe staggering to the corner at the bell.

Refreshed by his minute’s rest between rounds, Montague got back to business in the third round, yet so did Horiguchi, who showed off some impressive ground and pound once he got his opponent on his back. In the stand-up game late, Montague was the busier and more effective fighter, but it wasn’t enough for him to pull out the win.

Zak Cummings handed Brazil’s Yan Cabral his first pro loss in their welterweight bout, escaping some tight submissions to put together his own offensive attack and earn a close, but unanimous, decision.

Cummings’ good fortune early almost turned into a disaster, as he rocked Cabral with a left to the head, only to almost get submitted by a triangle choke after the two hit the mat seconds later. Cummings was able to break free and get back to his feet, but he was put on the mat with less than two minutes left. Cabral wasn’t able to capitalize, building Cummings’ confidence as round two began, and the former Ultimate Fighter competitor went on the attack as the crowd roared. Cummings didn’t back down as the round progressed either, putting him in good stead heading into the final stanza.

Cabral continued to hunt for submissions in the third round, but Cummings defended perfectly, eventually getting mount himself before taking Cabral’s back. There, he looked for his own submission, mixing in strikes to open his foe’s defenses. Cabral was able to get free with 90 seconds left, and the jiu-jitsu master almost locked up Cummings’ arm, but the Missouri product escaped and grabbed the dominant position on the ground, sealing the victory for himself. 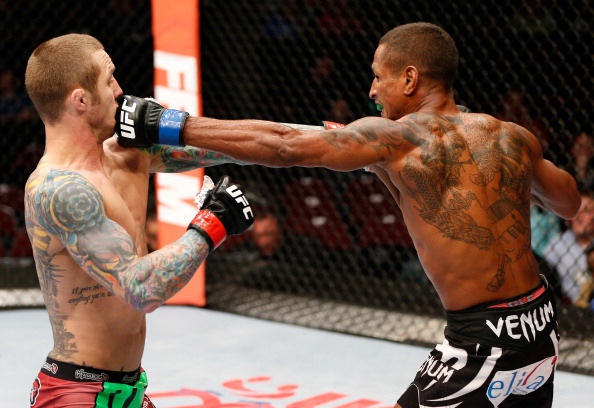 In his first bout since May of 2012, Johnny Eduardo made quite the statement, stopping number four-ranked bantamweight contender Eddie Wineland in the first round in one of the biggest upsets of 2014 thus far.

Wineland looked supremely confident from the time he stepped out from the locker room, and that may have cost him, as he peppered his foe from the start, but never stepped on the gas pedal. Eduardo didn’t have that problem, and after a right hand staggered Wineland, a second right put him down and out, with referee Herb Dean stopping the bout at the 4:37 mark.

It was a grueling three-round battle between featherweight veterans Nik Lentz and Manvel Gamburyan, with Lentz scoring a clear-cut unanimous decision win.

Lentz had a dominant first round both striking and grappling, with the only negative of the round for “The Carny” being a stray low punch that gave Gamburyan a brief respite. Other than that though, Lentz was always a step ahead of the Californian.

Gamburyan (16-9, 1 NC) got on the board early in the second though, cracking Lentz with two looping rights that got his foe’s attention. A takedown followed in the second minute, but Lentz evened the score with a takedown of his own a minute later. From there, Lentz remained in control, keeping Gamburyan locked up against the fence as he used knees and punches to prevent a restart.

Lentz (27-6-2, 1 NC) kept the heat on in the final frame, but Gamburyan – whose right eye was swelling shut – had his moments, most notable a submission attempt early in the round. But even a restart from referee Jerry Krzys didn’t give Gamburyan enough time to turn the tide before the end of the fight. 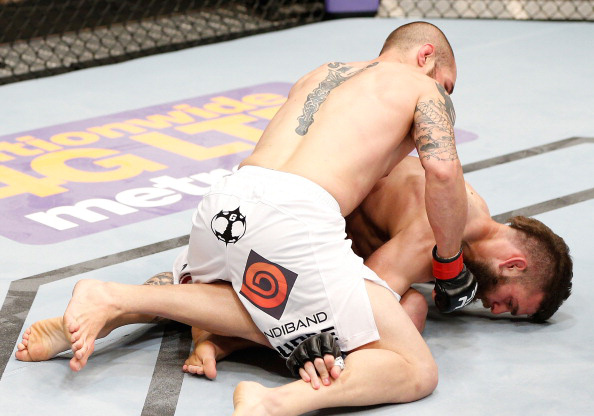 since 2010, halting Ben Wall in the first round.

The lightweights engaged in some solid back-and-forth action early on, but once Salas (12-5) rocked Wall (7-2-1) with a right to the temple, he didn’t let the Australian off the hook, with a follow-up straight left putting Wall on the mat. A follow-up series of punches brought in referee Gary Copeland to stop the fight at the 2:41 mark.

The game plans were clear from both men at the start – Tumenov to counter, Lapsley to get the fight to the mat. Tumenov’s plan won, as he tossed off several takedown attempts from the veteran and patiently waited for his time to strike. 3:56 into the fight, he found his opening, drilling Lapsley with a straight left that dropped him hard to the mat, with referee Keith Peterson immediately stepping in to halt matters.