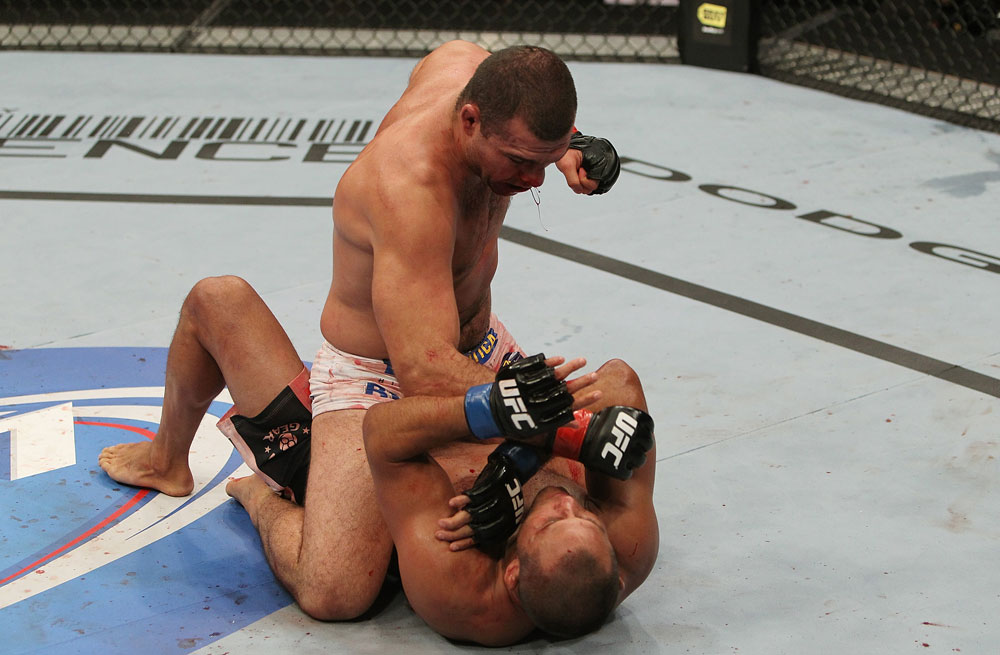 One of mixed martial arts’ longest reigning superstars, former UFC light
heavyweight champion Mauricio “Shogun” Rua has been thrilling fans
around the world for years. Here’s a look at some of the Brazilian
bomber’s most memorable moments.

Akira Shoji – October 5, 2003 – PRIDE Bushido 1
Result – Rua KO1
4-1 in his mixed martial arts career, 21-year old Mauricio Rua
made his PRIDE debut against the man many of the Japanese
organization’s big names made their bones against – veteran gatekeeper
Akira Shoji. And despite the fact that Shoji had been on the losing end
of his PRIDE bouts more often than not, he was never one to go away
quietly, and he actually came into the Rua bout with a two-fight winning
streak, his first in three years. And while obviously raw technique
wise, there was no disputing the athleticism and potential of the
youngster from Curitiba, who rebounded from a slow start that saw him
taken down and almost caught in a heel hook to stop Shoji with a series
of flush shots to the head at the 3:47 mark. The win began a streak that
lasted nearly two and a half years and built Rua from unknown to
superstar.

Quinton Jackson – April 23, 2005 – PRIDE Total Elimination 2005
Result – Rua TKO1
4-1
as a pro, Rua made his debut in PRIDE on October 5, 2003 in the
organization’s first Bushido show. Following the win that night over
veteran gatekeeper Akira Shoji, Rua stopped Akihiro Gono
and Yasuhito Namekawa in two more Bushido bouts before moving to the
big show with a February 2005 win over Hiromitsu Kanehara at PRIDE 29.
Next up for ‘Shogun’ was established star Quinton “Rampage” Jackson, who
had just rebounded from his second loss to Wanderlei Silva
by winning a split decision over Rua’s brother Murilo. With this added
incentive, Rua stepped into the Osaka Dome ring not only looking to
establish himself as one of the game’s top young stars, but to avenge
his brother. As he told me in 2007, “He (Jackson) was the star in PRIDE,
and I was the new guy from Brazil. I knew that the fight would be
difficult, he beat Ninja (Rua’s brother Murilo) before in a very
controversial result, and this was my opportunity to avenge my brother.
At the end, the fight was easier than everyone could imagine.” I don’t
know about easy, but it was certainly impressive, and perhaps Rua’s most
spectacular victory, as he tore through Jackson en route to a first
round TKO that put him on the international map. “Shogun” was for real.

Antonio Rogerio Nogueira – June 26, 2005 – PRIDE Critical Countdown 2005
Result – Rua W3
Just
two months after his career defining win over Jackson, Rua was called
back into action to face countryman Antonio Rogerio “Minotouro” Nogueira
in the quarterfinals of the PRIDE middleweight Grand Prix. Combined,
the two owned a 12-0 PRIDE record, and they fought hard to keep that
zero, with the resulting bout gaining much fan support as one of the
best in the organization’s history. And that’s no surprise considering
the back and forth nature of the fight as well as the high-level
striking and groundwork from both men. When it was over, Rua had pounded
out a unanimous decision win, but there were some who believed Lil’ Nog
deserved the nod.

Ricardo Arona – August 28, 2005 – PRIDE Final Conflict 2005
Result – Rua KO1
With two huge wins under his belt in the 2005 Grand Prix tournament, Rua made it three in a row with a semifinal stoppage of Alistair Overeem,
setting up his final match against Ricardo Arona in August of 2005. It
was both fighters’ fourth match in four months against world-class
competition (Arona defeated Dean Lister, Kazushi Sakuraba,
and Wanderlei Silva to make it to the final), and the question of
burnout had to be considered. But once the bell rang, it was clear that
Rua was only getting warmed up, and he broke open the fight and ended it
suddenly at the 2:54 mark with a stomp and a series of follow-up
hammerfists that put Arona out and gave ‘Shogun’ the 2005 PRIDE
middleweight Grand Prix title. Pound for pound? He was certainly in the
conversation.

Mark Coleman - February 26, 2006 – PRIDE 31
Result – Coleman TKO1
Rua’s
defeat of Arona left only one thing for him to accomplish, and that was
to add a legend to his resume. Mark Coleman was designated to be that
legend, but what was shaping up to be an interesting contest instead
ended abruptly when a Coleman takedown dislocated Rua’s elbow, forcing
an immediate halt to the bout. And what was even more interesting than
the bout itself was the post-fight melee in the ring that included
Wanderlei Silva and Phil Baroni.
Time healed the bad blood between the two, but they would meet again
nearly three years later in the UFC, with Rua scoring a third round TKO
win.

Cyrille Diabate – September 10, 2006 – PRIDE Final Conflict Absolute
Result – Rua TKO1
In
his first fight following the injury suffered in the Coleman loss, Rua
was matched with kickboxing standout Cyrille “The Snake” Diabate,  a
current UFC vet. Diabate may have been the best pure technical striker
Rua had ever faced, and his prowess was evident early. In response, Rua
did what all smart fighters do – he took the fight to his side of the
playing field, and for him that was to the canvas. Rua dominated on the
ground, but then finished things off with the stomps that are not legal
here in the UFC. Rua was back.

Kevin Randleman – October 21, 2006 – PRIDE 32
Result – Rua Wsub1
As
one of the featured fighters on PRIDE’s first United States show, Rua
wanted to leave an impression on Stateside fans, and what better way to
do it than to beat the Hammer House teammate of Coleman, former UFC
heavyweight champion Kevin Randleman? Plus, like Quinton Jackson,
Randleman held a win over Rua’s brother Murilo, so that added to
Shogun’s incentive. “The Monster” tore after Rua at the opening bell,
but the poised Brazilian weathered the storm and submitted Randleman.

Forrest Griffin – September 22, 2007 – UFC 76
Result – Griffin Wsub3 I (Watch Video)
With
the demise of the PRIDE organization, Rua moved over to the UFC, and
his debut against Forrest Griffin was one of the most highly-anticipated
ever. But by the time Griffin submitted Rua with a rear naked choke at
4:45 of the third round, the fight turned into one of the year’s biggest
upsets, and forced Rua back to the drawing board as he looked to
re-establish himself.

Chuck Liddell – April 18, 2009 – UFC 97
Result – Rua TKO1 I (Watch Video)
After
two knee surgeries, Rua returned to the Octagon in January of 2009 to
take on old nemesis Coleman, and while he still didn’t look like the old
“Shogun,” Rua did stop the UFC Hall of Famer in the final round. But it
was a Montreal fight against future Hall of Famer Chuck Liddell that
would tell whether Rua was truly back or not, and a 100 percent healthy
“Shogun” delivered the goods at UFC 97, knocking Liddell out in the
first round. It may have been Rua’s most satisfying win.

Lyoto Machida – October 24, 2009 – UFC 104
Result – Machida W5
The
back to back stoppages of Coleman and Liddell put Rua in line for a
shot at newly crowned Lyoto Machida, and he got his shot in Los Angeles
at UFC 104. Before the fight, the unbeaten Machida was seen as virtually
unbeatable, with his unorthodox style a puzzle that few, if any, would
be able to figure out. Rua came up with a master plan though, and by
using his aggressiveness in spurts, he was able to baffle Machida during
the 25 minute battle.

When it was over, many believed a new
champion would be crowned, but by razor-thin scores of 48-47 across the
board, Machida retained the belt.

“In my point of view, I think I
won the last three rounds of the fight,” said Rua after the bout.
“Everybody that has spoken to me after the fight has told me the same,
that I won the fight, so what can I do? A fight is a fight and it’s very
disappointing.”

The subsequent outrage from fans prompted an immediate rematch, and on May 8, 2009, Rua would get his shot at redemption.

Lyoto Machida II – May 8, 2010 – UFC 113
Result – Rua KO1 I (Watch Video)
The
official time will say that it took Rua three minutes and 35 seconds to
knock out Lyoto Machida in their rematch at UFC 113, but getting to
that point in his career took years of spectacular highs and devastating
lows. And this was certainly one of those highs, as he cracked the
seemingly undecipherable style of Machida and sent him crashing to his
first pro defeat. More importantly, the win earned Rua the UFC light
heavyweight title. At last, “Shogun” was a world champion.

Dan Henderson – November 19, 2011 – UFC 139
Result – Henderson W5 I (Watch Video)
Rua’s reign atop the 205-pound weight class wouldn’t last long, as he was stopped by late replacement Jon Jones at UFC 128 in
March of 2011. Disappointed but not deterred, Rua bounced back five
months later with a blistering first round finish of Forrest Griffin
that earned “Shogun” a bit of redemption for his opening UFC defeat. In
November of 2011, Rua would end up on the short end of a five round
decision to former PRIDE colleague Dan Henderson, but the end result
doesn’t even begin to tell the tale of an epic 25 minute struggle that
earned praise from the masses as one of the greatest MMA fights of
all-time, if not the greatest. It was that good. On August 17, Rua looks
to add another highlight to his storied career when he faces Chael
Sonnen.