Shogun Rua Taking A Different Approach At This Stage

Shogun Rua isn't looking past his upcoming fight with Rogerio Nogueira at Fight Island. At this stage of Shogun's career, he knows it's best to focus one fight at a time.
By Thomas Gerbasi, on Twitter: @TGerbasi • Jul. 21, 2020

One of my favorite fighting anecdotes comes from boxing hall of famer Ray “Boom Boom” Mancini, who said that after going through a hard fight, he knew that opponent better than anyone because he saw what they had on the inside.

If that’s true, then no one knows Rogerio Nogueira better than Mauricio “Shogun” Rua, who has already gone the distance twice with his compatriot and will meet him once again this Saturday on Fight Island.

“In some ways, yes, it it’s true that we likely know each other as fighters more than anyone,” laughs Rua. “Because not only did we fight twice, but people forget we had a training camp for a fight in Canada that fell through very close to the fight date. So this is our fourth time preparing to fight each other. I wouldn’t say we have a bond, but we do respect each other a lot as fighters and people, and there’s no animosity. Just competitiveness.”

Bond or not, Rua and Nogueira in the same Octagon or ring together has produced magic, first in PRIDE in 2005, when “Shogun” outpointed “Little Nog” on his way to winning the Middleweight Grand Prix in one of the best fights in the history of the Japanese promotion. Ten years later, the duo landed in Rio de Janeiro for the 2015 rematch, a Fight of the Night won once again by Rua. Nearly five years later, more of the same is expected by the Brazilian stars.

“I think we both always look to finish the fight,” said Rua when asked why this pairing always works. “We have different styles and weapons but are both very aggressive and looking to finish. So I think that way of fighting, combined with the old rivalry, competitiveness, plus the different styles - he is a southpaw boxer with a good bottom game, I’m a right-handed Muay Thai fighter with an aggressive top game - make for an exciting fight.”

It’s also a fight that many were surprised to see happen, considering that the 44-year-old Nogueira is planning on retiring after the bout while the 38-year-old Rua is on a 4-1-1 run that began with his second win over his friendly rival in 2015. In other words, Rua has a lot more to lose than gain this weekend, but while he’s surprised that he will meet Nogueira again, he was also more than willing to give him another shot in the twilight of his career.

“He was always asking for the fight in interviews, media appearances,” said Rua. “So I always knew that. if it was up to him, it would eventually happen. I respect that. Initially, I didn’t see much sense in it from my perspective, but as a fighter I can understand what it means to him, so I respect that and didn’t want to deny him the opportunity.” 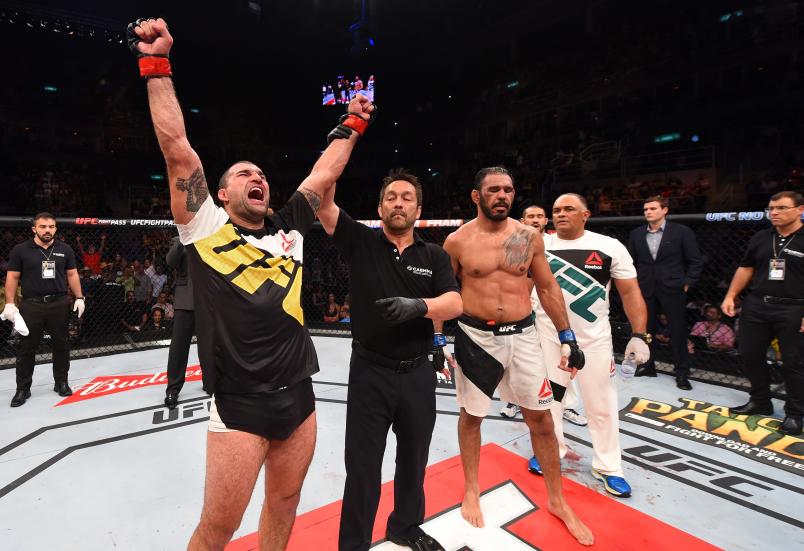 That’s class. And it’s always been Rua’s style throughout a storied 18-year pro career that has seen him rise to the top not only in PRIDE, but in the UFC, where he won the light heavyweight title in 2010. And through the peaks and valleys of a fighting life, he’s stayed steady, earning him the respect of fans, the media, and most importantly, his peers.

“It is very satisfying,” he said. “It takes a lot to step inside that cage and fight at this level. I have the biggest respect for anyone that does it, and to get respect from everybody for all the hard work I did means a lot. People often see the bright lights and the supposed glamour of things, but it’s a hard job, which I love, but it’s very different from how people imagine it and it takes a lot to do it.”

At 38, there are more fights in the rearview mirror than in front of him, but there is the possibility that after Saturday night, should he beat Nogueira, he will be a winner in five of his last seven bouts with one draw. That could be enough to push him into the title picture once again, and what a story that would be if he got up the mountain once more. But in typical “Shogun” style, he’s not speculating about anything beyond the fight in front of him.

“I learned not to really think about this anymore,” Rua said. “It’s a different stage of my career, and the only proper approach is to look at things one fight at a time. Focus on the task ahead, and then move on. The rest is not in our control.”